6:00pm: The deal is now official, according to NBA.com’s transaction log. 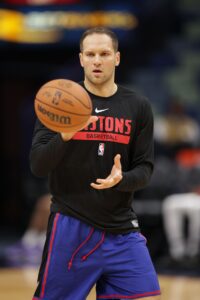 As Wojnarowski notes, Bogdanovic is earning $19.5MM in 2022/23, the last year of his current deal. This new agreement, which has virtually the same annual average value, will keep him under team control through 2024/25.

According to Wojnarowski, when Pistons GM Troy Weaver traded for Bogdanovic, he had his sights set on extending the sharpshooting ace long-term.

Though the Nets traded for his draft rights as the No. 31 pick in the 2011 draft, Bogdanovic did not make his NBA debut until the 2014/15 season. Prior to Utah and Detroit, the 33-year-old has enjoyed stints on solid playoff clubs in Brooklyn, Washington, and Indiana.

Bogdanovic has thus far served as a helpful stretch-four veteran presence for the rebuilding Pistons. Though Detroit is just 1-5, the team’s longer-term outlook is fairly rosy, given the development of exciting young lottery additions Cade Cunningham, Jaden Ivey and Jalen Duren.

With the advent of this new agreement, Bogdanovic, a knockdown long-range shooter (he has made 39.4% of 5.4 three-pointers per game for his career), could remain in Detroit well into the team’s return to the postseason.