Suns shooting guard Devin Booker and Celtics forward Jayson Tatum have been named the NBA’s players of the month for the Western and Eastern Conferences, respectively, the league announced today (via Twitter). 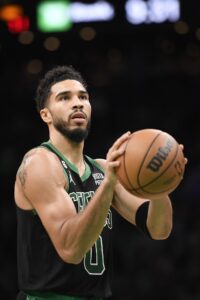 All of the initial monthly awards combined the statistics from October and November, since October was an abbreviated month (the regular season started on the 18th).

The 26-year-old is coming off Wednesday’s spectacular performance against Chicago, in which he scored 51 points on 20-of-25 shooting — including 6-of-7 from three and 5-of-6 from the line — in only three quarters of action in the blowout victory.

The 24-year-old had his own incredible performance in Wednesday’s victory over Miami, recording season-high 49 points on .600/.667/.917 shooting splits.