When an NBA team is over the salary cap and wants to make a trade, certain rules in the Collective Bargaining Agreement dictate how much salary the team is permitted to take back. We’ve outlined these rules in detail in our glossary entry on the traded player exception. Essentially, in most cases, an over-the-cap team must send out nearly as much salary as it acquires for the trade to be legal.

In some scenarios, salary aggregation is required in order to legally match the incoming player’s cap hit. Aggregation is the act of combining multiple players’ salaries in order to reach that legal outgoing limit.

For example, if Team A wants to acquire a player earning $30MM from Team B, sending out a player earning $20MM would fall short of the minimum requirement, since Team A can only bring back up to 125% of the outgoing amount (plus $100K). Trading a $20MM player would allow the team to acquire up to $25.1MM in salary.

However, by adding a second player earning $4MM to its package, Team A would reach the minimum outgoing threshold by “aggregating” its two traded players, resulting in a total of $24MM in outgoing salary — that’s just barely enough to bring back a $30MM player.

Crucially, sending out two players together in a trade doesn’t necessarily mean they have to be aggregated.

For instance, if Team A sends out one player earning $25MM and another earning $5MM in exchange for its incoming $30MM player, there’s no need to aggregate the two outgoing salaries. Since $25MM is an amount sufficient to take back $30MM, the $5MM player can essentially be traded for “nothing,” creating a $5MM trade exception that could be used at a later date.

Here’s another example to illustrate that point, using the same $30MM incoming player: If Team A decides to salary-match by sending out one player earning $20MM and a second earning $15MM, that team can’t generate a trade exception worth the excess amount ($5MM), because the two outgoing salaries must be aggregated, resulting in a simultaneous trade. 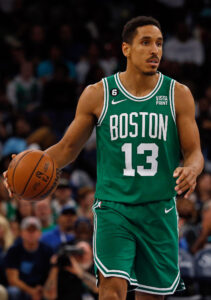 One good recent example of salary aggregation came when the Celtics acquired Malcolm Brogdon from Indiana over the summer. In order to take on Brogdon’s $22.6MM salary, Boston needed to send out $18MM, but the team didn’t have one player earning that amount it wanted to trade to make the deal legal.

The NBA’s trade rules state that when a team acquires a player using salary-matching or a trade exception (rather than cap room), it cannot aggregate that player’s salary in a second trade for two months. That makes December 9 an important date on this season’s trade calendar, since February 9 is the 2023 trade deadline. Any player acquired after today won’t be eligible to have his trade aggregated prior to the deadline.

As outlined above, that doesn’t mean that a player acquired after today can’t be traded again before the deadline along with other players — it simply means his salary can’t be aggregated as part of the deal.

For instance, when the Thunder acquired Maurice Harkless from Atlanta on September 27 using a trade exception, he became ineligible to be aggregated in a second deal until November 27. However, Oklahoma City traded him to Houston along with three other players on September 30.

That move was possible because Harkless’ salary didn’t need to be aggregated with Derrick Favors‘, Ty Jerome‘s, and/or Theo Maledon‘s in order to make that second trade legal for Oklahoma City. From the Thunder’s perspective, the eight-player trade broke down into multiple smaller parts, with Harkless essentially being traded “by himself” despite being part of a package.