Lakers star Anthony Davis is on track to make his return from a foot injury on Wednesday night, reports Dave McMenamin of ESPN. 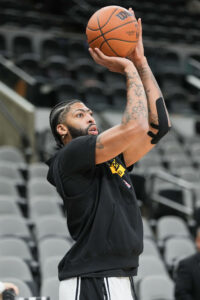 According to McMenamin, Davis intends to suit up in Los Angeles against the Spurs as long as he doesn’t experience any setbacks in his pregame warmups.

Davis has been sidelined since December 16 due to a bone spur and stress reaction in his right foot. The Lakers, who were 12-16 when Davis went down, have held their own without one of their two superstars available, going 10-10 in their last 20 games and remaining very much in the play-in hunt.

At 22-26, the Lakers are 13th in the Western Conference, but they’re only three games back of the fifth-seeded Clippers.

As McMenamin outlines, the plan on Wednesday is for Davis to be on a restriction of about 20-to-24 minutes. The Lakers’ next game isn’t until Saturday in Boston, so the team will have a couple days off to assess how the big man’s foot responds to his return to action.

In addition to getting Davis back, the Lakers will have more reinforcements in their frontcourt when they host the Spurs — newly acquired forward Rui Hachimura will be available to make his debut with his new team, head coach Darvin Ham told McMenamin and other reporters on Tuesday.

With Davis just coming off a major injury and Hachimura working on getting acclimated to a new situation, the Lakers’ rotation on Wednesday will be a work in progress. According to a previous report, the plan is for Hachimura to join the starting frontcourt alongside Davis and LeBron James, but that may not happen right away.

7 thoughts on “Anthony Davis Set To Return On Wednesday”