Thunder big man Aleksej Pokusevski has suffered a non-displaced tibial plateau fracture in his left leg and will be reevaluated in six-to-eight weeks, the team announced. 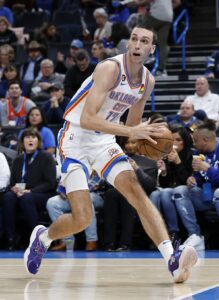 The young Serbian struggled with efficiency and defense in his first two seasons, but he had started to figure out the speed of the NBA game in 2022/23 prior to getting injured. He has played almost exclusively center this season after previously floating between multiple frontcourt positions.

As a former first-round pick (17th overall in 2020) now in his third year, Pokusevski will be eligible for a rookie scale extension in the offseason.

With Pokusevski and Jeremiah Robinson-Earl (ankle) sidelined, Darius Bazley and Mike Muscala should see an uptick in minutes for the Thunder.

Jazz forward Lauri Markkanen hasn’t missed a game during his breakout season. That could change on Monday. Markkanen is listed as questionable to play against Chicago due to a right knee contusion.

Markkanen has been a find for the Jazz, averaging 21.7 points and 8.4 rebounds per game after being acquired in the Donovan Mitchell blockbuster with Cleveland.

Two-time MVP center Nikola Jokic, who entered the league’s coronavirus protocols earlier this week, remains sidelined, and both he and Murray will miss tomorrow’s contest against the Mavericks, Wind adds.

The Thunder have picked up third-year options for guards Josh Giddey and Tre Mann and a fourth-year option for forward Aleksej Pokusevski, the team announced in a press release.

Giddey, the sixth pick in last year’s draft, is now locked into a $6,587,040 salary for the 2023/24 season. He was a member of the All-Rookie Second Team last season and was named Western Conference Rookie of the Month four times. He averaged 12.5 points, 7.8 rebounds and 6.4 assists in 54 games before a hip issue ended his season in February.

Nuggets star Nikola Jokic is looking forward to representing Serbia on the basketball court for the first time in three years, writes Johnny Askounis of EuroHoops. The two-time MVP will join the national team for a pair of 2023 FIBA World Cup qualifying games, hosting Greece August 25 and traveling to Turkey August 28.

“I feel great, similar to every time I reunite with these guys. I just met some of them,” Jokic said in advance of the Serbian team’s training camp. “We are preparing, we just started and we will see how far we can go. Up first are the FIBA World Cup Qualifiers and the goal of helping Serbia qualify to the World Cup.”

Jokic also plans to participate in EuroBasket next month, and he could return for both the 2023 World Cup and the 2024 Olympics if Serbia qualifies. Jokic cited a special pride in being able to play for his home nation.

“It means a lot, I talked with my family, it’s a totally different feeling when you play for the national team,” Jokic said. “I felt different when I came here than when I go to Denver.”

The Thunder are interested in reaching contract extension agreements with Luguentz Dort and Darius Bazley but only if the price is right, GM Sam Presti told The Oklahoman’s Joe Mussatto and other media members on Monday.

“They’re both great guys,” Presti said. “I want to hear what they’re thinking, and I need them to understand we have to also balance the interest of the team as well.”

“We’ll definitely have a conversation on that,” Presti said. “I don’t know when those conversations will pick up. We’ll have some different options. I don’t want to get into all of them.”

Here are some other highlights from Presti’s annual end-of-season press conference, via Mussatto:

One Los Angeles team is getting its head coach out of the NBA’s health and safety protocols today, while the other has placed their coach in the protocols.

The Lakers got the good news, as Frank Vogel has cleared the protocols and will be back on the sidelines for the team on Friday night vs. Portland, according to Dan Woike of The Los Angeles Times (Twitter link). David Fizdale will return to his role as Vogel’s lead assistant after serving as the acting head coach for the last 12 days.

Meanwhile, Clippers head coach Tyronn Lue has entered the protocols, according to an announcement from the team. Lue, the 10th head coach to be affected by the protocols this month, will be replaced in the short term by assistant Brian Shaw.

Here are more protocol-related updates from across the NBA:

The Wizards now have five players in the NBA’s health and safety protocols, according to head coach Wes Unseld Jr., who told reporters today that Anthony Gill and Thomas Bryant are the latest players to enter the protocols (Twitter link via Chase Hughes of NBC Sports Washington).

Bryant is coming off an ACL tear and has yet to play this season, so being in the protocols won’t affect his availability. However, Gill will no longer be an option in the short term for the Wizards after appearing in eight of the team’s last 11 games.

The Thunder exercised their 2022/23 contract options for forwards Darius Bazley and Aleksej Pokusevski and guard Ty Jerome, the team announced in a press release.

There was nothing surprising about the rebuilding club with a good cap situation securing the rights to three young players through next season.

Bazley has appeared in 119 career games, including 67 starts, and was fourth on the team in scoring (13.7 PPG) and second in rebounding (7.2 RPG) last season. He’s due to make approximately $4.265MM next season.

In 33 games with the Thunder last season after being acquired from the Suns, Jerome averaged 10.7 PPG and 3.6 APG. He’ll received $4.22MM in guaranteed money next season.

Jazz All-Star point guard Mike Conley enjoyed a solid comeback game after missing nine contests with a sore right hamstring, writes Eric Walden of the Salt Lake Tribune. In what amounted to a playoff tune-up game for Conley, an unrestricted free agent this summer, he scored 10 points in just 16 minutes during the first half of a 109-93 victory against the Thunder. Conley, 33, could be in line for one last big multiyear payday thanks to his stellar season in Utah.

“It was great to have him back,” Conley’s All-Star Jazz teammate Rudy Gobert said. “I feel like he was quick, he was making the right decisions. Obviously, he didn’t play the second half, but I thought in the first half, he really gave us a lift. That’s what we expect him to do. He’ll find his rhythm and hopefully get back to the level that he is comfortable playing [at]. If he plays the way he played tonight every night, I’m totally fine with that.”