Veteran forward Anthony Tolliver signed a 10-day contract with the Pelicans under the hardship exception the day after Christmas. However, Tolliver tested positive for COVID-19 and the contract was voided. He has now cleared protocols and is eligible to be signed immediately, Will Guillory of The Athletic tweets. Tolliver played for the Sixers last season.

We have more news from the basketball world:

Here are the latest developments regarding players entering or exiting the league’s health and safety protocols:

3:50pm: The signing is official, according to a team press release.

10:13am: Veteran forward Anthony Tolliver will sign a 10-day contract with the Pelicans under the hardship provision, tweets Shams Charania of The Athletic.

Tolliver, 36, appeared in 11 games with the Sixers last season after joining the team on a 10-day deal in mid-April. He eventually signed for the remainder of the season, but was waived in August before his 2021/22 contract became guaranteed.

This will mark the 12th team and the 14th NBA season for Tolliver, who went undrafted in 2008. He has appeared in 730 games with career averages of 6.1 points and 3.3 rebounds.

New Orleans currently has three players in the health and safety protocols.

The move opens up a roster spot for Philadelphia, which now has 15 players officially under contract (14 on standard contracts and one on a two-way). The team will also sign Grant Riller to a two-way contract and Haywood Highsmith to an Exhibit 10 deal, leaving three spots available on the 20-man offseason roster.

In addition, Philadelphia has yet to sign second-round draft pick Charles Bassey, who was selected No. 53 overall by the team last month.

Assuming he clears waivers on Sunday, Tolliver will reach free agency after concluding his 13th NBA season. The 36-year-old signed two ten-day contracts and a rest-of-season deal with the Sixers in 2020/21, appearing in a total of nine contests.

MAY 2: The move is official, tweets Keith Pompey of The Philadelphia Inquirer. 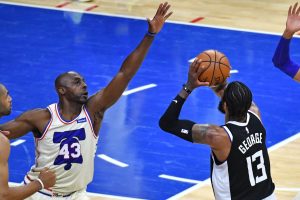 APRIL 30: The Sixers intend to sign veteran power forward Anthony Tolliver for the remainder of the season once his current 10-day deal expires, sources tell Shams Charania of The Athletic (Twitter link).

Tolliver, who was out of the NBA for most of the 2020/21 season, signed a 10-day contract with Philadelphia on April 12, then got a second 10-day commitment from the team on April 22. That second deal will expire on Saturday night, so the 35-year-old’s rest-of-season deal figures to be finalized on Sunday.

Having made five appearances so far for the 76ers, Tolliver hasn’t exactly put up big numbers in his limited role, averaging just 1.6 points and 1.6 rebounds on .100/.143/.833 shooting in 12.4 minutes per contest. However, the 13-year veteran has a strong NBA track record, including a career .373 3PT%, and brings some playoff experience to Philadelphia’s roster.

Tolliver currently holds the 15th and final spot on the Sixers’ standard roster, and the team has also filled both two-way slots, so re-signing the former Creighton standout on Sunday could be the last roster move the club makes before the playoffs begin.

Tolliver, who is currently occupying the 15th spot on Philadelphia’s standard roster, appeared in just one game during his first 10 days with the team, going scoreless with a pair of rebounds in 14 minutes in last Friday’s win over the Clippers. We’ll have to see if the 13-year veteran gets a longer look during his new 10-day contract, which will cover the 76ers’ next five games, starting tonight in Milwaukee.

Tolliver’s new 10-day deal will expire on the night of May 1, at which point the Sixers could either sign him to a rest-of-season contract or let him walk.

Be sure to check out our tracker to keep tabs on all of the currently active 10-day contracts around the NBA.

It’s been about three months since Jayson Tatum tested positive for COVID-19, but the Celtics forward is still dealing with the aftereffects of the virus, he acknowledged on Tuesday, per Tim Bontemps of ESPN.

“It’s a process. It takes a long time,” Tatum said. “I take an inhaler before the game since I’ve tested positive. This has kind of helped with that and opened up my lungs, and, you know, I never took an inhaler before. So that’s something different.”

Tatum said he “for sure” feels better now than he did a month ago, though he admitted he’s not sure when he’ll be able to stop using an inhaler before games.

“There’s no exact timetable,” Tatum said. “(It’s) just when I feel comfortable enough and I think I don’t need it.”

Veteran power forward Anthony Tolliver will join the Sixers on Wednesday, Keith Pompey of the Philadelphia Inquirer tweets. Tolliver officially signed a 10-day contract on Monday and will provide some frontcourt depth, at least in short run. Philadelphia has home games against two of the league’s top teams this week, the Nets on Wednesday and the Clippers on Friday.

We have more Atlantic Division news:

APRIL 12: The Sixers have officially signed Tolliver to a 10-day contract, the team announced today in a press release.

Philadelphia waived Ignas Brazdeikis earlier this week to open up a spot on its 15-man roster.

Tolliver, 35, will join the 11th team of his well-traveled career which began in 2007 after he went undrafted. The Missouri native last played for Memphis during the bubble in Orlando last season.

Tolliver split the 2019/20 campaign between the Grizzlies, Kings and Blazers, appearing in 55 total games while averaging 3.6 PPG and 2.8 RPG. He’s a career 37.3% shooter from beyond the arc.

While Tolliver will not be relied on to make a major impact, he will be expected to give Philadelphia some quality minutes off the bench.

“I think he’s a guy that could become a quality backup big man in this league,” the Raptors’ head coach said. “He’s got some length, athleticism, shot blocking and rebounding. I’m excited to have him and hope we can help him develop.”

Birch joins the Raptors after having cleared waivers following his buyout from the Magic, where he was a solid contributor.