Jazz forwards Rudy Gay and Elijah Hughes have entered the NBA’s health and safety protocols, the team announced on social media (Twitter link). They join Rudy Gobert and Joe Ingles as players in protocols for Utah.

All four players will miss the team’s game against the Pistons on Monday. Two-way player Malik Fitts will also be sidelined due to a right wrist injury, meaning Utah will be without five players for the contest. According to our tracker, nearly 50 players are currently in the NBA’s protocols.

Here are some other COVID-related notes from around the league:

Justin Anderson and Torrey Craig have become the latest Pacers players to enter the league’s health and safety protocols, per James Boyd of The Indianapolis Star (via Twitter). The Pacers now have six players in protocols. Craig signed a two-year, $10MM deal with Indiana last summer, while Anderson just signed a 10-day hardship contract with the team last week.

On the bright side, Pacers assistant coach Lloyd Pierce has cleared the protocols and has returned to the team, tweets Scott Agness of Fieldhouse Files.

Here are some more COVID-related updates:

Warriors star Draymond Green has cleared the NBA’s health and safety protocols, according to Marc J. Spears of ESPN’s The Undefeated (Twitter link). He’s expected to play in Monday’s game against Miami.

Green missed two games due to protocols, including Golden State’s road contest against Utah on Saturday. The Warriors still ended up winning 123-116 and currently own the league’s best record at 28-7.

Here are some other COVID-19 updates from around the association:

Rockets big man Christian Wood thinks the team’s impressive turnaround is for real, writes Tim MacMahon of ESPN. The Rockets started the season 1-16, but had won seven in a row prior to Friday’s 123-114 loss to the Bucks. Wood admits he wasn’t necessarily expecting the winning streak, but believes in the team.

“I believe it’s real. Especially with Jalen Green being out, which is a key piece, points that [would be] on the board that are not. We’re still managing to win games. And with Kevin Porter Jr. out. I think we’re even better than we’re showing. We’re just clicking.”

The two young guards are sidelined with hamstring and thigh injuries, respectively.

12:21pm: The Rockets have officially signed Brooks to a multiyear contract, the team announced today in a press release. The club also confirmed the previously-reported signing of guard Marcus Foster. 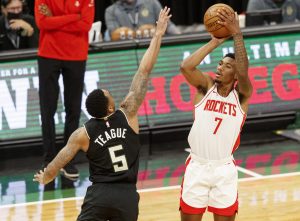 According to Kelly Iko of The Athletic (Twitter link), Brooks’ four-year deal can be worth up to $7.2MM. That means it’s a minimum-salary contract, which would have a four-year value of $7,201,486. The second and third years are non-guaranteed with July trigger dates, while the fourth year is a team option, says Iko.

11:10am: The Rockets are signing guard Armoni Brooks to a four-year contract, according to Adrian Wojnarowski of ESPN (Twitter link). The first-year salary will be guaranteed, with trigger dates for each season after that, Wojnarowski reports.

After reaching free agency this offseason, Brooks re-signed with the Rockets on an Exhibit 10 contract, which the team converted to a two-way contract on Wednesday. Houston wouldn’t have been able to turn Brooks’ one-year Exhibit 10 contract into a four-year deal directly, but moving him to a two-way slot opened the door for the two sides to negotiate a new multiyear contract. The club will use part of its mid-level exception to complete the signing.

The move will create a bit of a roster crunch for the Rockets, since they already had 15 players on guaranteed contracts. John Wall, who technically remains with the team but isn’t expected to play in any games, is the most expendable player on the roster, but there hasn’t been any indication that a trade or buyout is close. Dante Exum could also be at risk — half of his $5MM cap hit consists of incentives that the club wouldn’t have to pay if Exum is cut.

Moving Brooks back to the standard roster will also open up a two-way slot for the Rockets. If former two-way player Tyler Bey clears waivers, perhaps he could return on a new deal. Camp invitee Daishen Nix is also a candidate to have his Exhibit 10 deal converted to a two-way pact.

The Rockets are converting the contract of three-point shooting specialist Armoni Brooks to a two-way deal, writes Jonathan Feigen of The Houston Chronicle. The move is official, according to NBA.com’s transactions log. To make room, Houston has waived Tyler Bey, who was occupying one of the team’s two-way slots.

Brooks has been a consistent weapon all preseason, averaging 10 points per game and shooting 56.2% from the field. He poured in 15 points in the fourth quarter of Monday’s game at Toronto. Brooks signed a two-way deal with Houston in April and averaged 11.2 PPG over the final 20 games of the season.

Bey signed an Exhibit 10 deal with the Rockets in August, then was waived September 18 when Houston re-signed Dante Exum. He was brought back on a two-way deal eight days later. Bey, who was with the Mavericks last season, saw action in just one of Houston’s preseason games.

The Rockets will also sign former EuroLeague guard Marcus Foster, according to Emiliano Carchia of Sportando. The 26-year-old played for both Panathinaikos and Turk Telekom Ankaran last season.

5:38pm: The signing is official, according to a team press release.

12:41pm: The Rockets are signing guard Armoni Brooks to an Exhibit 10 contract, a source confirmed to Hoops Rumors. News of the agreement was first reported by Jonathan Feigen of the Houston Chronicle.

Brooks, 23, will have the opportunity to make the team’s regular-season roster in training camp this fall. He spent 20 games with the club at the end of last season, averaging 11.2 points and 3.4 rebounds per game.

The Rockets have one final spot for camp and could consider adding Anthony Lamb, who signed a two-way contract with the team last March. Both Brooks and Lamb played summer league with Houston in Las Vegas after receiving two-way qualifying offers.

Should Brooks not make the regular-season roster, he’d be eligible to receive a bonus up to $50K if he spends at least 60 days with Houston’s G League affiliate.

Jazz guard Elijah Hughes is concentrating on his defense during the team’s summer league play this month, as relayed by Sarah Todd of the Deseret News. Hughes is in the midst of his first-ever summer league stint with the franchise.

“The typical Syracuse stigma is that guys don’t play defense and guys can’t guard, so I want to break that stigma,” Hughes explained. “Also I have a lot of pride. I want to hold my own. If people are trying to get me on switches, I want to be able to hold my own.”

Hughes, 23, was drafted with the No. 39 overall pick last December and is under contract entering next season. He appeared in 18 games this past season, albeit for a total of 64 minutes.

“Eli has a big body, and for him it’s learning to play angles defensively,” Jazz summer league coach Bryan Bailey said. “If he continues to learn to play angles and cut guys off with his size, he’ll be a good defender.”

Here are some other notes from the Western Conference tonight:

The Rockets have made a qualifying offer to Armoni Brooks, tweets Kelly Iko of The Athletic. The offer means Brooks will be restricted when free agency begins on Monday.

The 23-year-old shooting guard signed a two-way contract with Houston in early April. He averaged 11.2 points in 20 games, starting five times, and proved to be an effective three-point threat, connecting at 38.2% from behind the arc.

Brooks played three seasons in the G League after going undrafted out of the University of Houston in 2019. He posted a 16.8/3.7/3.3 line this season with Rio Grande Valley, the Rockets’ G League affiliate.

Because Brooks was a two-way player with just one season in Houston, he received a one-year, two-way qualifying offer with a $50K guarantee.