7:57pm: Schröder’s deal with the Lakers is now official, the team announced in a press release. 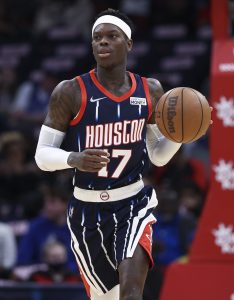 “We are extremely pleased to welcome Dennis Schröder back to the Lakers,” said GM Rob Pelinka. “Not only do Dennis and Coach Ham share a player-coach history together, but they also reflect one another’s mentality of toughness with an extremely competitive edge. Dennis will add both depth and an on-ball defensive presence to our core at the guard position. He is also a proven scorer and playmaker. We are really excited for Dennis to get to camp and get back to work in L.A. after his highly successful run with his national team this offseason.”

The Lakers don’t have any cap space available and used their taxpayer mid-level exception to sign Lonnie Walker, so Schröder will receive a minimum-salary deal, as Shams Charania of The Athletic confirms (Twitter link). Schröder will earn $2.64MM for the upcoming season as a nine-year veteran, while the Lakers’ cap hit will be $1.84MM.

It will be a reunion for the two sides, as Schröder spent the 2020/21 season with Los Angeles. Stein reported last month that the Lakers were giving “legit consideration” to bringing Schröder back, and now that has come to fruition.

Schröder reportedly turned down a four-year extension from the Lakers worth $80MM+ during the 2020/21 season, then had to settle last summer for a one-year, $5.9MM deal with the Celtics, who eventually traded him to the Rockets in February. Now he’ll return to L.A. on a minimum contract.

Schröder, who turned 29 years old yesterday, is coming off a strong performance at EuroBasket, where he led Germany to the semifinals before falling to Spain earlier today. He averaged 26.0 points and 8.0 assists in the three elimination games, including a game-high 30 points on 11-of-17 shooting against Spain.

According to Stein (Twitter link), Schröder’s international performance raised his free agent stock, and now he’ll get the reunion he desired. ESPN’s Ramona Shelburne reports (via Twitter) that Schröder had been talking to the Lakers “for months” about a possible return, noting that the veteran guard played under new head coach Darvin Ham while the two were with the Hawks.

As John Hollinger of The Athletic observes (via Twitter), the team’s backcourt is looking pretty crowded with Schröder’s addition, but he was the best unrestricted free agent available on the market and the Lakers need to add talent wherever they can find it after missing the playoffs with a 33-49 record last season. Sources tell Stein (Twitter link) that Ham will be in charge of the team’s lineup, but L.A. reportedly views Russell Westbrook and Schröder as point guards, Patrick Beverley and Kendrick Nunn as shooting guards, and Austin Reaves as a small forward behind LeBron James.

In addition to the players Stein mentioned, the Lakers also have Walker, second-round pick Max Christie, Juan Toscano-Anderson, and Troy Brown on the wing, though Toscano-Anderson is versatile enough to play in the frontcourt at times as well.

Once Schröder’s deal is official, the Lakers will have 12 players on guaranteed contracts, two on non-guaranteed deals (Reaves and Wenyen Gabriel) and both two-way slots filled. As ESPN’s Bobby Marks tweets, adding a 15th player to the standard roster would cost the Lakers $7MM due to the luxury tax.