As the Rockets prepare for a pivotal offseason, the team will have to make sure all of its most prominent figures are on the same page. According to Shams Charania of The Athletic, there was “something of a clash of styles” brewing during the season in Houston, as some members of the team – including Chris Paul – pushed Mike D’Antoni to include more movement in his offense.

D’Antoni and the Rockets, of course, relied heavily on James Harden‘s isolation-centric style, and those iso possessions became less efficient in the postseason.

There were some “tense moments” between Harden and Paul throughout Game 6, according to Charania, who hears from sources that the two Rockets guards had a verbal back-and-forth about ball distribution in the locker room after the game.

Charania cautions that occasional heated moments like that aren’t uncommon around the NBA, and emotions run particularly high after season-ending losses. Still, it will be interesting to see if an apparent difference in philosophies will result in any tweaks to the Rockets’ offense next season.

Paul, 27, made his NBA debut last season and appeared in 64 total games for the Spurs. While he only averaged 2.3 PPG and 1.1 RPG in just 9.0 minutes per contest, he provided the team with strong perimeter defense.

Paul’s contract with San Antonio included a non-guaranteed salary for 2018/19, but the club waived him in July, before that money became guaranteed. Since being cut by the Spurs, Paul has been linked to several international teams, including clubs in Spain, Montenegro, and Greece. He also worked out for the Cavaliers and Timberwolves in early September.

After going undrafted in 2013 out of Illinois, Paul spent time with international club in Russia, Spain, and Turkey, so the move to China won’t be his first stint overseas. He’ll join a Zhejiang team that also features former NBA big man Tyler Hansbrough and is currently out of the CBA playoff picture at 8-16.

Longtime NBA coach Larry Brown is having a rough time coaching the Euroleague’s Fiat Torino in Italy. The team has lost 10 straight and Brown is on the hot seat, Emiliano Carchia of Sportando tweets. Brown was hired over the summer, his first head coaching job since leaving his position at Southern Methodist two years ago.

Anthony, who was waived by the Bucks last October, appeared in 490 regular season games over the course of his 10-year NBA career for the Heat, Celtics, Pistons, and Spurs. The 36-year-old also played in another 66 postseason games, primarily for the Heat — he won a pair of titles with Miami.

Here are a few more international notes and updates on players with a connection to the NBA:

Brandon Paul, Brandon Rush and Darius Johnson-Odom are among the free agent veteran guards the Timberwolves brought in for a workout on Monday, Darren Wolfson of KSTP tweets. Monta Ellis is also on the list of players Minnesota is looking at, according to Jon Krawczynski and Shams Charania of The Athletic (Twitter link).

Paul, a 27-year-old shooting guard, made his NBA debut last season and appeared in 64 total games for the Spurs, averaging 2.3 PPG and 1.1 RPG in 9.0 minutes per contest. He was waived on July 31.

Rush, a 33-year-old shooting guard, played with the Timberwolves in 2016/17, appearing in 47 games, including 33 starts. Rush signed a 10-day contract with the Blazers last season but did not appear in a game and the team declined to give him a second 10-day deal.

Johnson-Odom hasn’t appeared in an NBA game since the 2013/14 season. Johnson-Odom, 28, played in Italy last season.

Ellis, 32, was out of the league last season after the Pacers waived him in July 2017.

With the addition of forward Luol Deng, the Timberwolves have 13 players with guaranteed deals and James Nunnally‘s partially guaranteed pact and are holding open auditions for last spot or two if they don’t retain Nunnally. They brought in wing players Nick Young, Arron Afflalo, and Corey Brewer last week.

They also reportedly would have interest in Joakim Noah should the center hit the open market. Like Deng, Noah previously played under coach Tom Thibodeau when he was coaching in Chicago.

SEPTEMBER 6: The Cavaliers worked out a few more free agents today, according to Michael Scotto of The Athletic, who tweets that Kobi Simmons, Brandon Paul, and Rodney Purvis all earned a look from Cleveland as well. Simmons, Paul, and Purvis played for the Grizzlies, Spurs, and Magic, respectively, in 2017/18.

SEPTEMBER 5: A group of veteran free agents worked out for the Cavaliers today, sources tell Alex Kennedy of HoopsHype (Twitter link). According to Kennedy, Tyler Ulis, Alan Williams, JaKarr Sampson, and Marcus Georges-Hunt were among the players to participate in the audition.

It’s not clear if the Cavaliers are seeking depth at a particular position and looking to fill out their 15-man regular season roster, or if they’re simply familiarizing themselves with the various options remaining on the free agent market.

Cleveland only has 12 players on guaranteed contracts, but has a reported agreement in place with David Nwaba and seems likely to eventually re-sign Rodney Hood too, so there may not be more than a single open spot available on the regular season roster.

All four players named by Kennedy appeared in NBA games last season. Ulis played 71 games (43 starts) for the Suns before being waived in June; Sampson appeared in 22 contests for the Kings on a two-way contract; Williams returned from a knee injury to play five games at the end of the season for the Suns before being cut in July; and Georges-Hunt saw limited minutes off the bench in 42 games for the Timberwolves.

While Alexander only appeared in a total of eight regular season NBA games for Portland, he has spent time with a handful of teams. The ex-Jayhawk was in camp with the Magic in 2016 and the Pelicans in 2017, and signed a 10-day contract with the Nets near the end of the 2016/17 season.

Here are a few more notes on one-time NBA players who are playing – or may play – in international leagues this season:

The Spurs have officially waived shooting guard Brandon Paul, the team announced today in a press release. Paul will become an unrestricted free agent on Thursday, assuming he goes unclaimed on waivers.

Paul’s $1,378,242 salary would have become guaranteed if he had remained under contract through Wednesday, so the Spurs had to make a decision on him this week. Due to that August 1 trigger date, a team placing a waiver claim on Paul would have to be willing to guarantee his 2018/19 salary. Either way, San Antonio won’t be on the hook for that money.

With Paul no longer under contract, the Spurs have 14 players on guaranteed salaries, leaving one spot open for the regular season roster. That may bode well for second-round pick Chimezie Metu, one of the few 2018 draft picks who remains unsigned. San Antonio could fill out its 15-man squad by inking Metu to his first NBA contract.

Over the last month or so, we’ve seen a number of players traded or waived before their salary guarantees for the 2018/19 season kicked in. Players who sign contracts that feature non-guaranteed salaries in future years often have June or July trigger dates, forcing teams to make decisions fairly early in the offseason — that way, if the player is waived, he’ll still have the opportunity to catch on with a new club well before the new season begins.

We’ve been tracking those decisions using our list of guarantee dates for the summer of 2018. While most of those deadlines are now in the rear-view mirror, a few teams will have decisions to make within the next week.

Here’s a quick rundown of the decision dates to watch this week: 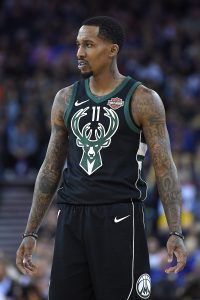 Jennings’ salary was initially set to become guaranteed if he remained under contract through July 1, and there were reports at the start of the month suggesting he believed that would happen. Instead, the Bucks pushed back his guarantee date until the start of August, giving the team time to assess whether it needed the veteran guard on the roster once it was done making other offseason moves.

The Bucks recently agreed to add Pat Connaughton to their backcourt and haven’t been able to trade Matthew Dellavedova this summer, which may not bode well for Jennings’ roster spot. Even if Milwaukee decides to cut him though, Jennings could return on a new minimum-salary contract at some point — his current deal calls for a $2.22MM cap hit, but the Bucks could give him the same salary on a new one-year contract with a $1.51MM cap charge.

The Spurs tend not to throw in the towel early on developmental projects, preferring to give them time to ease their way into larger roles. Paul only averaged 9.0 minutes per contest last season, but he appeared in 64 games, signaling that San Antonio had enough confidence in him to continue giving him NBA minutes rather than hiding away in the G League. That’s a positive sign for Paul as decision day approaches.

The Thunder went out of their way to acquire Nader from the Celtics in a trade last week even though the young wing already has a partial guarantee of $450K. Oklahoma City’s luxury-tax issues are well documented and the club wouldn’t have traded for him if it didn’t intend to keep him, so Nader looks like a virtual lock to have his full salary guaranteed.

White, who missed a good chunk of the 2017/18 season with a broken foot, talked earlier this month about how he’s still working to mentally get over that injury. He was physically healthy enough to play for the Cavaliers‘ Summer League team, but his performance in Las Vegas was a mixed bag. He showed off his energy and rebounding ability with 7.4 RPG in 23.9 minutes per contest, but struggled to put the ball in the basket, averaging just 6.0 PPG on 33.3% shooting.

The Cavs have roster spots to spare and could stick with White, but if they’re still unsure about his place on the roster, they’ll likely waive him by next Sunday to avoid guaranteeing half his salary for 2018/19.

10:10pm: The Warriors have assigned rookie Jordan Bell to their affiliate in Santa Cruz, the team announced in an email. Bell returned to the Golden State lineup this week after missing 14 games with inflammation in his left ankle.