The Pistons have been granted a disabled player exception due to Cade Cunningham‘s season-ending injury, reports James L. Edwards II of The Athletic (Twitter link). The former No. 1 overall pick underwent surgery in December to address a left tibial stress fracture.

A disabled player exception grants an over-the-cap team some extra spending power when it loses a player to an injury deemed more likely than not to sideline him through at least June 15.

As we explain in our glossary entry, the disabled player exception can be used to sign a free agent, to claim a player off waivers, or to acquire a player in a trade. The exception can only be used on a single player and can only accommodate a player on a one-year deal. A free agent signee can’t get a multiyear contract, and any trade or waiver target must be in the final year of his contract.

Although the disabled player exception gives a team extra cap flexibility, it doesn’t open up an extra spot on the 15-man roster. The club must have a roster spot available to use the DPE to add a player.

Cade Cunningham pondered his choices for a long time before electing to undergo season-ending surgery on his left shin, but he’s convinced that he made the right choice, writes James L. Edwards III of The Athletic. Cunningham accompanied the Pistons on their flight to Paris for Thursday’s game, marking his first road trip with his teammates since having the operation last month.

The top pick in the 2021 draft was hesitant to miss so much of his second NBA season, and he did a lot of research to make sure surgery was the best option. Detroit’s front office let Cunningham make the final decision, and he consulted with other players who have been in similar situations, such as Jrue Holiday, Rodney McGruder and Tim Hardaway Jr., before making up his mind.

“It’s tough, man,” Cunningham said. “I’m so young into my career, and, to me, I feel like I still haven’t shown people who I am. I started to get a rhythm, but then my shin kept killing me. It was hard for me to put the entire season to the side, sit down and take care of it. After talking with everyone, I realized it’s a long game, and I have a lot more basketball to play. I just want to be able to play my game and not think about my body and try to overcompensate on different things.”

DECEMBER 16: Cunningham underwent season-ending surgery on Friday, according to the Pistons, who said in a press release today that the procedure will “stabilize and promote complete healing of a left tibial stress fracture.” 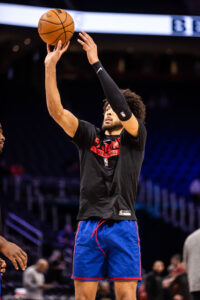 The former No. 1 overall pick is expected to return to full basketball activities in the 2023 offseason, per the team.

DECEMBER 12: Pistons second-year guard Cade Cunningham, the No. 1 pick in the 2021 draft, has opted for season-ending shin surgery, Adrian Wojnarowski of ESPN reports.

Cunningham appeared in just 12 games this season and hasn’t played since Nov. 9. At that time, the team described his injury as left shin soreness.

Cunningham sat out for over a month, hoping that rest and rehabilitation would solve the problem. He consulted with multiple doctors in recent weeks and ultimately decided – with the Pistons and his representatives at Excel Sports – to undergo the season-ending procedure. He’s expected to be fully recovered by next season’s training camp.

It’s a major setback for a team in the midst of a major rebuild. General manager Troy Weaver has accumulated six first-round picks over the last three seasons, with Cunningham being the crown jewel. The team was hoping Cunningham and this year’s No. 5 pick, point guard Jaden Ivey, could develop chemistry this season with the expectation of a playoff push next season. They could still develop into one of the league’s top backcourts but Cunningham’s injury will delay that possibility.

The franchise is bound for another high lottery pick and is a major contender in the Victor Wembanyama sweepstakes. The Pistons have a 7-22 record and figure to have one of the league’s worst records with their franchise player out of action.

Cunningham was averaging 19.9 points, 6.2 rebounds and six assists in 12 games this season. He got off to a slow start during his rookie season after suffering an ankle injury during training camp. He came on strong during the second half of the season and finished third in the Rookie of the Year voting behind Scottie Barnes and Evan Mobley.

The Pistons will now focus of the development of their other young players this season.

Ivey is off to a relatively strong start in his rookie campaign, averaging 15.3 points and 4.0 assists. Third-year guard Killian Hayes, who was part of Weaver’s first draft class, has shown some improvement while receiving steady playing time in Cunningham’s absence. He’s averaging 8.1 points, 5.1 assists and 1.1 steals, though it’s uncertain whether the front office views him as part of the long-term picture.

With Cunningham out, the team’s brass may be more inclined to trade veterans such as top scorer Bojan Bogdanovic and guard Alec Burks.

Pistons general manager Troy Weaver said that Cade Cunningham was resistant to having season-ending surgery to repair a stress fracture in his left shin, according to Mike Curtis of the Detroit News (subscription required). Cunningham hoped that a few weeks of rest would allow him to get back on the court, but he ultimately chose to undergo the procedure this week.

“No player wants to sit out,” the Pistons GM said. “He’s a highly-competitive young player and he wants to play and he wants to be a part of the group. Of course, this is a tough deal for him to have to sit down and get this taken care of.”

The Pistons’ rebuilding timeline won’t be affected by Cunningham’s injury, Weaver insists: “Injuries are a part of it, but it doesn’t change anything. It changes for Cade, but not for what we are trying to accomplish. We’re trying to continue to grow the program and compete every night. … We’re still going full blast ahead.”

The Pistons were relieved that Bojan Bogdanovic‘s injuries weren’t more severe, according to Mike Curtis of the Detroit News. Bogdanovic was injured late in Friday’s game against Phoenix when Torrey Craig stepped on his ankle.

Bogdanovic, who leads the Pistons in scoring, missed Sunday’s game against Cleveland due to right knee and ankle soreness.

“It was a torque action where he stepped on his ankle and it went to his knee,” Pistons coach Dwane Casey said. “… It’s not as bad as it seemed, but it’s still sore and still hurting. Bogey’s a tough kid, a tough guy. He’ll fight through it and come back from it.”

10:44am: Cunningham is feared to have a stress fracture in his left shin, according to James L. Edwards III and Shams Charania of The Athletic, who say the Pistons and Cunningham remain hopeful that the injury will get better with rest.

If the pain continues to linger, it’s possible surgery will be necessary, but Cunningham is trying to “turn over every stone” before deciding to take that route, per The Athletic’s duo.

Cunningham is currently considered to be out indefinitely, Edwards and Charania add.

9:59am: The Pistons and second-year guard Cade Cunningham have been trying to determine whether or not surgery will be required to address Cunningham’s injured left shin, according to veteran reporter Marc Stein (Twitter link).

Cunningham has missed Detroit’s last five games (all losses) due to what the team is referring to as “left shin soreness.” Based on Stein’s report, it sounds like it must be more than a simply a contusion if surgical treatment is under consideration.

Cunningham was considered one of this year’s top breakout candidates, and the Pistons signaled their intent to push for a play-in spot when they acquired forward Bojan Bogdanovic from Utah in September. However, the club is off to a 3-14 start and currently ranks dead last in the NBA standings. As Stein notes, if Cunningham has to go under the knife, he’d be out for an extended period, making it even more challenging for the Pistons to be competitive this season.

It’s unclear if there’s a timeline for the franchise and its 21-year-old centerpiece to come to a decision on how his injury will be treated. For now, he remains unavailable, with no set timeline for his return.

Cade Cunningham will miss the next four games due to soreness in his left shin, the Pistons announced in a press release. Cunningham’s condition will be reevaluated in a week.

The second-year guard won’t play in tonight’s game against Boston, Monday’s contest against Toronto, or the first two games of Detroit’s upcoming road trip against the Clippers and Lakers. If the pain subsides, he could be activated for a November 20 game at Sacramento.

The pain in his shin also forced Cunningham to sit out Friday’s loss to the Knicks as the Pistons fell to 3-10, putting them in a tie for the worst record in the Eastern Conference.

Cory Joseph took Cunningham’s place in the starting lineup against New York, but he got into early foul trouble and played just six total minutes. Killian Hayes and Alec Burks may also see more playing time while Cunningham is sidelined.

“The medical team is working with it and treating it,” Casey said. “They felt those days off would take away the pain, soreness.”

After finishing third in the Rookie of the Year voting last season, Cunningham’s numbers have improved across the board. Through 12 games, he is averaging 19.9 points, 6.2 rebounds and 6.0 assists per night.

Wizards guard Bradley Beal has cleared the NBA’s health and safety protocols, the team announced. However, Beal will still miss Saturday’s game against Utah due to “return to competition reconditioning,” with further updates to be provided as he continues to inch closer to a return.

Here are several more injury-related updates from around the NBA:

The Pistons have lost six of their last seven games but the last two outings have been encouraging. They snapped a five-game losing streak by defeating defending champion Golden State on Sunday and lost on the road to Milwaukee by two points on Monday.

Jaden Ivey, the fifth pick in the draft, has scored in double digits in every game he’s played, including a combined 34 points the last two nights. Backcourt partner Cade Cunningham notched a total of 50 points, 16 rebounds and 16 assists in those two games.

“It’s a confidence builder for a young group, for a kid like Ivey and we keep forgetting Cade’s in year two, for those guys to understand what it takes to beat great teams like we’ve played the last couple nights,” coach Dwane Casey said during Monday’s postgame press conference.