The Wizards have formally announced a series of changes to Scott Brooks‘ coaching staff, issuing a press release to confirm the moves.

Tony Brown, who has been an assistant on Brooks’ staff since 2016, has been promoted to associate head coach, making him the lead assistant in Washington. The team also hired Mike Longabardi, Corey Gaines, and Dean Oliver as assistants.

Ryan Richman, an assistant coach for Brooks last season, has been named the head coach of the Capital City Go-Go, Washington’s G League affiliate. Jarell Christian, the Go-Go’s head coach in 2018/19, has joined the Wizards’ staff as an assistant. Interestingly, the Go-Go’s press release refers to both moves as “promotions.”

Despite all the incoming hires, the Wizards are also bringing back several members of last year’s staff, including assistants Robert Pack and Mike Terpstra, and developmental coach Kristi Toliver.

“Coach Brooks and I worked closely to pinpoint what areas we needed to improve and identify the best candidates, both internally and externally, to make the appropriate changes,” new permanent Wizards GM Tommy Sheppard said in a statement. “We’re very confident that we have a strong staff in place that is in line with the vision we have for our rebuilding our culture and focusing on the overall development of our players.”

Since being hired by the Knicks earlier this month, new head coach David Fizdale has talked repeatedly about making it a priority to connect with his new star, Kristaps Porzingis. On Thursday, Porzingis finally reciprocated some of Fizdale’s love, tweeting that he had a “great conversation” on the phone with Fizdale, and is “excited” about the hiring.

As Ian Begley writes at ESPN.com, Porzingis’ tweet isn’t a whole lot to go on, but it looks like a positive sign for the relationship between the big man and the Knicks’ new head coach. Porzingis didn’t always have the rosiest relationship with former head coach Jeff Hornacek, and skipped his exit meeting with Knicks brass – including Steve Mills – in 2017, so it’s important to get him on board with the franchise’s direction as he becomes extension-eligible for the first time this offseason.

Shooting guard Bradley Beal believes he’s worthy of a max deal as he heads into restricted free agency this summer, Jorge Castillo of the Washington Post reports. Beal will sign an offer sheet from a suitor willing to pay that price if the Wizards don’t make a max offer when free agency begins in July, he told Castillo in a phone interview. “I feel like I’m a max player and that’s what I’m looking for,” he said. “If Washington can’t meet that requirement then I may be thinking elsewhere. I’m pretty sure that they probably won’t [let me go].” Beal declined a contract extension prior to the beginning of this past season and doesn’t believe his injury history will affect his bargaining power, Castillo adds. “The injury thing, that’s behind me,” Beal said. “I’m moving forward. I’m past it.”

In other news around the Eastern Conference:

Kings coaching candidate Henry Bibby believes he can reach DeMarcus Cousins, comparing the star center’s volatile temperament to that of Zach Randolph, another once-mercurial big man who shed his label as a malcontent while playing under a Grizzlies coaching staff that included Bibby, as Jason Jones of The Sacramento Bee details. Bibby, who is scheduled to interview for the job Monday, said he’d hire son Mike Bibby for his staff, telling Jones that they’d long ago repaired what had been a troubled relationship. Henry Bibby added that he’d run an offense reminiscent of the one his son directed as the point guard for the Kings in the early 2000s. “What I’m trying to get back is what Vlade [Divac] used to have up there, the old Sacramento Kings,” Bibby told Jones. “I want to get that back again, that excitement. They played as a team. They ran that corner offense, and that’s what I’d run. I’d put DeMarcus where Vlade was [on offense], and you play basketball with [Rajon] Rondo, [Ben] McLemore and guys like that.”

5:40pm: The move is official, the team announced.

Watson, 36, is not far removed from his playing career. He was in the league as recently as the 2013/14 season, when he appeared in 24 games with the Trail Blazers. He will make his head coaching debut on Tuesday against the Raptors.

Watson’s first coaching job was last season, when he was hired by the Spurs’ D-League affiliate, the Austin Spurs, as an assistant. He joined Hornacek’s staff prior to this season. Watson appeared in 878 games during his 13-year playing career with six different franchises, averaging 6.4 points and 4.4 assists.

The Suns added a veteran coach to help out Watson by hiring four-time NBA head coach Bob Hill as an assistant, Adrian Wojnarowski of The Vertical tweets.

(Dana Gauruder contributed to this report.) 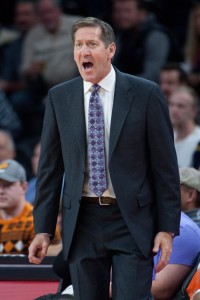 8:12am: The firing is official, the team announced, adding that it plans to name an interim coach by Tuesday (Twitter link).

7:46am: Phoenix will interview Gaines, Watson and Bjorkgren for the interim position, reports Paul Coro of The Arizona Republic (Twitter link).

7:29am: The Suns have fired coach Jeff Hornacek, league sources told Adrian Wojnarowski of The Vertical on Yahoo Sports. The team has yet to publicly acknowledge the move, but GM Ryan McDonough has already let Hornacek know his fate, Wojnarowski writes. Phoenix has lost 19 of its last 21 games and 14 in a row on the road, though injuries have played a role, with the team’s top three scorers absent for Sunday’s loss at Dallas, as Wojnarowski points out. His interim replacement is expected to be either one of two Suns assistants: Corey Gaines or Earl Watson, Wojnarowski also reports.

The move is no shock, as Hornacek’s job was reportedly under immediate threat in late December, when the team instead fired assistants Mike Longabardi and Jerry Sichting and shifted fellow assistants Watson and Nate Bjorkgren to more prominent roles. The future of the 52-year-old Hornacek was up in the air even as the season began, with a contractual decision on his team option for 2016/17 looming. Little has gone right since, as the Suns have compiled a 14-35 record in spite of realistic preseason hopes that they would make the playoffs for the first time since losing the Western Conference Finals in 2010. Phoenix stands nine games out of the final postseason spot in the West.

An offseason trade demand from Markieff Morris has seemingly hung over the team all season, even though he backtracked at the start of training camp. Trade rumors continue, and it’s reportedly a matter of when, not if, the Suns will trade the power forward who elicited a two-game suspension in December after he threw a towel in Hornacek’s direction during a December game.

Hornacek’s tenure began with much promise in 2013/14, his first season as an NBA head coach, when he finished second in Coach of the Year voting and the Suns went 48-34, narrowly missing the playoffs in a brutally competitive conference. The addition of Isaiah Thomas the following offseason backfired, and the Suns regressed to a 39-43 record last season, trading Thomas and Goran Dragic at the deadline. The Suns narrowly missed out on free agent prize LaMarcus Aldridge this past summer, instead setting off a negative chain reaction when they traded Marcus Morris and upset Markieff, his twin.

The Suns were 101-112 overall under Hornacek. Neither Gaines, Watson nor Bjorkgren has held an NBA head coaching job before. Gaines, 50, played parts of five seasons in the NBA and served as head coach and general manager of the WNBA’s Phoenix Mercury. He’s been with the Suns as a player development coach since 2010/11. Watson, 36, ended a 13-year playing career after the 2013/14 season, spending last season an assistant coach with the Spurs D-League affiliate before joining the Suns staff this past summer. Bjorkgren didn’t play in the NBA but has been the head coach for three different D-League teams, including the Suns affiliate. He, like Watson, became a Suns assistant just this past summer.

Is firing Hornacek the right move for the Suns, or did he deserve more of a chance? Leave a comment to tell us.