Deandre Ayton is only averaging 1.9 free throws per game and Suns coach Monty Williams is lobbying for his center to get more favorable whistles, Duane Rankin of the Arizona Republic writes.

“DA doesn’t get the benefit of some of the contact,” Williams said. “If a guy is driving to the basket and you hit him the way that he’s getting hit around the basket, backing people down or fighting for position, I think you probably get the free throw line a bit more, but it’s a totally different world for the guys who are posting up. You can pretty much beat him up down there.”

Ja Morant missed Sunday’s game against Washington with an ankle injury but it apparently will only be a one-game absence. The Grizzlies’ star guard is not on the injury report for Tuesday’s game against New Orleans, the team’s PR department tweets.

Meanwhile, Grizzlies big man Jaren Jackson Jr. could make his season debut on Tuesday, as the forward is listed as questionable. Jackson has been rehabbing from offseason right foot surgery. Morant’s backcourt partner, Desmond Bane, is doubtful due to toe soreness.

We have more injury updates regarding the Southwest Division:

With the future of the Jazz uncertain following the trade of Rudy Gobert and news that the team is open to moving its other 2022 All-Star (Donovan Mitchell), 2021 Sixth Man of the Year Jordan Clarkson is keeping an even keel, writes Sarah Todd of the Deseret News.

“My vibe is always good,” Clarkson said of his attitude while dealing with the Jazz’s tenuous outlook. “This is my ninth year going into the league. I know how the business of basketball works… This is all part of what it is. But my preparation never changes and I’m going to wake up every morning and be me and do what I do. Everything is good.”

There’s more out of the West:

Rockets rookie power forward Usman Garuba has great expectations for the future of fellow Houston first-year player Jalen Green, projecting Green’s scoring to ascend in the coming seasons, per Raul Barrigon of HoopsHype. The second pick in the 2021 draft, Green averaged 17.3 PPG on .426/.343/.797 shooting across 67 contests this year.

“He’ll be an All-Star for sure,” Green raved. “And I think he’s going to be the NBA’s leading scorer in a few years. We have to help him to achieve those goals. He’s by far the player that has surprised me the most this year. We all know how good was Anthony Edwards this season, right? Green will play like him next year, maybe even better.”

The 6’8″ Garuba, selected with the No. 23 pick by Houston in the 2021 draft, did not get a ton of run during his first year on a developing Rockets club. The 20-year-old averaged just 10.0 MPG across 24 games in 2021/22. He confirmed his interest in a return to the Summer League and to Spain during the 2022 offseason, with the blessing of the Houston front office.

“What I need now is to play games,” Garuba said. “After a season where I suffered some injuries, I started to play regularly by the end of March. Just when we played the last game I was like ‘Is that it? I want to play more!’ The Rockets know that if I’m healthy, I want to play for the Spanish team (in EuroBasket) – if they call me – and they’re OK with it.”

With the Wizards set to face the Mavericks on Friday night for the first time since the trade deadline, Tim Cato and Josh Robbins of The Athletic reassessed the deal that sent Kristaps Porzingis and a protected 2022 second-round pick to Washington in exchange for Spencer Dinwiddie and Davis Bertans.

Cato and Robbins agree that it was a win-win trade for the two teams. Porzingis’ time in Dallas had clearly run its course, but he has been productive with Washington, averaging 21.8 PPG, 8.3 RPG, 3.1 APG, and 1.6 BPG on .472/.305/.866 shooting in 13 games. He has been a willing passer and aggressive in the post, averaging 7.5 free throw attempts.

In addition to his production, Robbins writes that the Wizards are happy with Porzingis’ approach and toughness — the 7’3″ big man played through a couple of ankle sprains in recent games.

Dinwiddie has been able to spot-up for threes and drive-and-kick as a secondary or tertiary ball-handler next to Luka Doncic and Jalen Brunson. Bertans is still struggling to convert shots, but the team is holding out hope that might change over time.

The Sixers have confidence in coach Doc Rivers to lead the team to a title now that James Harden has been paired up with Joel Embiid, a source tells Marc Stein (Substack link). Philadelphia hasn’t won an NBA championship in 39 years and Rivers has a recent history of playoff disappointments, but team officials believe he can oversee the new partnership.

Shortly after the trade with the Nets was completed, Stein heard rumors that the Sixers might be considering Mike D’Antoni, who coached Harden for four years in Houston. D’Antoni is currently serving as a coaching advisor to the Pelicans after spending last season with Harden as an assistant in Brooklyn.

However, Stein’s source insists that Rivers’ job is safe, saying he gained admiration from ownership and the front office with the way he guided the team through the distractions caused by Ben Simmons‘ absence.

Stein offers more inside information from around the league:

The Mavericks decided to trade Kristaps Porzingis to the Wizards last week because they determined he couldn’t be an effective second star with Luka Doncic, Tim Cato of The Athletic states in a discussion of the deal. Porzingis was in his third season in Dallas, and all three had been disrupted by injuries, leading to concerns about whether he would ever be reliable to stay on the court. The Mavs are 13-9 in the games he has missed this season, so the front office felt it was safe to move on from his contract.

Cato is skeptical about Dallas’ return in the deal, although he says Spencer Dinwiddie will be a welcome addition for a team that has trouble driving to the basket and the Mavericks believe Davis Bertans is a better defender than his reputation would suggest. They plan to use him in larger lineups where his lack of rebounding will be less important.

Davis Bertans, who was traded to the Mavericks this week along with Spencer Dinwiddie, offered some insight into the dysfunctional situation he left behind with the Wizards, writes Jack Maloney of CBS Sports. During his introductory news conference Saturday in Dallas, Bertans described an atmosphere where each player seemed to have his own agenda.

“It’s tough to have team chemistry when every single day, the team is basically fighting with each other about ‘I want to get more minutes’ and ‘I want a bigger role.'” Bertans said. “That was probably the biggest part of struggles for most guys during the season. That kinda early on doesn’t show up because everybody’s trying to figure out what’s going on. Once it starts going downhill, it’s really hard to turn around and start going up again.”

Bertans’ comments seem to confirm a recent statement from Kentavious Caldwell-Pope that “egos and agendas” sank the Wizards’ season after a 10-3 start. Last weekend, Montrezl Harrell, who has since been traded to Charlotte, lamented the mood in the locker room, and he and Caldwell-Pope reportedly got into a physical altercation during halftime of a game this season.

Asked on Thursday night whether the Mavericks will go shopping on the buyout market, general manager Nico Harrison said he believes the team’s roster is “set,” as Brad Townsend of The Dallas Morning News tweets.

Dallas has long been viewed as a potential landing spot for buyout candidate Goran Dragic, but the team’s acquisition of Spencer Dinwiddie and Harrison’s post-deadline comments suggest a pursuit of the Slovenian may no longer be in the cards, tweets Tim MacMahon of ESPN.

According to Marc Stein (Twitter link), Dragic and the Spurs may take a little time to negotiate a buyout agreement. If and when the veteran point guard becomes available, he’ll likely have suitors who are able to offer him a more significant role than Dallas, Stein notes.

9:29pm: The trade is official, according to a Wizards press release. Dallas also confirmed the deal in a press release, announcing that they’ve waived Brown. 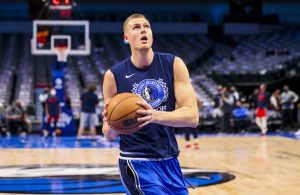 The second-rounder going to Washington is a protected 2022 pick, the teams announced. It’ll have to be the Mavs’ own second-rounder, since they hadn’t previously acquired any others.

“Kristaps is an All-Star player whose unique talents will fit well within our system and allow him to impact the game for us in multiple ways,” Wizards president of basketball operations Tommy Sheppard said in a statement. “He will get a fresh start with our team and provide us with the opportunity to play multiple lineups that feature size, versatility and shooting ability.”

1:38pm: The Mavericks and Wizards have agreed to a major trade, according to reports from Shams Charania of The Athletic and Marc Stein (Twitter links).

Big man Kristaps Porzingis is headed to Washington in the deal, per Stein, while Dallas will receive point guard Spencer Dinwiddie, according to Charania. Tim MacMahon of ESPN reports (via Twitter) that the Mavs are also acquiring sharpshooter Davis Bertans, while Adrian Wojnarowski of ESPN says (via Twitter) that the Wizards are getting a second-round pick.

According to Stein (via Twitter), the Mavs spent much of the day on Thursday trying to find a home for Porzingis, who was previously linked to the Raptors. Dallas gave up a significant package in 2019 to acquire Porzingis from the Knicks, but he has continued to battle health problems in the years since then and hasn’t developed into the star running mate for Luka Doncic that the Mavs envisioned. He is also owed nearly $70MM for the two years beyond this season.

This season, Porzingis has averaged 19.2 PPG and 7.7 RPG while playing improved defense, but his three-point rate dipped to a career-worst 28.3% and he has only been healthy for 34 of 55 games. Dallas has a 13-8 record in the games he has missed. 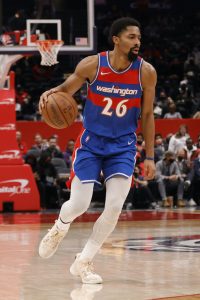 The Wizards, who are retooling their roster around Bradley Beal, will roll the dice on Porzingis, hoping he has more success in D.C. than he did in Dallas. They’ll give up Dinwiddie and Bertans, two players who struggled badly this season in the midst of pricey multiyear deals.

Dinwiddie, 28, signed a three-year contract with the Wizards in the offseason, but has shot just 37.6% from the floor in his first season back from ACL surgery. As Josh Robbins of The Athletic tweets, Dinwiddie never seemed comfortable in Washington’s offense without the ball in his hands, which happened a lot when he played alongside Beal.

Bertans, meanwhile, is in the second season of a five-year, $80MM contract, but has seen his three-point shooting fall off a cliff in 2021/22. A career 40.7% three-point shooter entering the season, the 29-year-old forward has made just 31.9% of his attempts from beyond the arc this year.

The Mavericks will be hoping that both players, who have had plenty of success in the past can bounce back in Dallas. Dinwiddie will give the team another ball-handler when Doncic and/or Jalen Brunson aren’t on the court, while Bertans will provide another floor-spacer to give Doncic more room to operate.

As Bobby Marks of ESPN notes (via Twitter), Dinwiddie will give the Mavs’ some insurance in case they’re unable to re-sign Brunson in unrestricted free agency this summer. However, sources tell MacMahon (Twitter link) that Dallas remains confident about its ability to retain Brunson beyond this season.