LaMelo Ball was extremely impressive during the Drew League pro-am in Los Angeles, writes Jeremy Woo of Sports Illustrated. The younger brother of Lonzo Ball will spend the upcoming season in Australia and has a chance to be one of the top picks in the 2020 draft.

After seeing him in action, Woo states that LaMelo has a chance to be the best player in the family. He’s already 6’6″ at age 18 and is a much better scorer than Lonzo was at the same age. Woo describes LaMelo as “an excellent passer” with an effective change-of-pace move and a “quicker, cleaner release” on his shot than his brother has.

Woo also got a first-hand look at Cade Cunningham, whom he calls “best high school prospect regardless of class.” The 6’7″ point guard appears to be headed to Kentucky, North Carolina or Oklahoma State and could be the first player drafted in 2021.

There’s more from around the basketball world:
Retweet 1 Share 0 Send via email0

Luc Mbah a Moute only played one season with the Rockets, but he admits it’s going to be an odd feeling when he faces his former teammates tonight, relays Mirjam Swanson of The Daily Bulletin. Mbah a Moute came to Houston as a free agent last summer at the urging of Chris Paul, then returned to the Clippers over the offseason after receiving a one-year, $4.3MM offer.

“It’s always, always [weird],” said Mbah a Moute, who has been with six organizations in his 10-year career. “Especially that team, we had a really good team and a chance to do something special, so it’s going to be weird, but I look forward to it.”

Mbah a Moute provided a strong defensive presence off the bench for the Rockets. He averaged 7.5 PPG and shot .364 from 3-point range, but a late-season shoulder injury limited his effectiveness in the playoffs.

The Jazz’ G League affiliate, the Salt Lake City Stars, selected five-year NBA veteran Willie Reed with the No. 1 overall selection in this year’s G League draft. Reed, 28, has played for the Nets, Heat, Clippers, and Pistons, holding career averages of 4.9 points and 3.8 rebounds per game in 152 career contests. Some other notable selections include:

Onuaku, 21, was just recently waived by the Trail Blazers. He was selected in the second round of the 2016 NBA Draft, and has extensive G League experience, playing in 83 total games for the Rockets’ G League affiliate, the Rio Grande Valley Vipers the past two seasons.

Warrick, 36, last played in the NBA during the 2012-13 season with the Charlotte Bobcats, where he appeared in 27 games and scored 7.0 PPG. In 526 career games, the Syracuse product averaged 9.4 points and 4.0 rebounds per game. Last season, the veteran played with Ironi Nahariya of the Israeli Premier League.

Blair, 29, last played in the NBA during the 2015-16 season with the Wizards, where he appeared in 29 games and averaged only 7.5 minutes per contest. In 424 career games, the big man averaged 6.8 points and 5.1 rebounds per game. Blair most recently played professionally for San Lorenzo de Almagro in Argentina.

The full results of all four rounds of this year’s G League draft can be viewed here.

Several NBA teams secured returning rights for players who were in camp with them but failed to make the 15-man roster. Raptors 905 acquired center Eric Moreland from the Canton Charge, Cleveland’s affiliate, for forward Kyle Wiltjer, according to a G League release. The Raptors waived Moreland a week ago. Raptors 905 pulled off a similar deal with the Texas Legends, the Mavericks’ affiliate, to acquire guard Kyle Collinsworth, who was waived at the same time as Moreland. Texas acquired the returning player rights to forwards C.J. Leslie and Kennedy Meeks, according to a G League release. The Delaware Blue Coats, the 76ers’ affiliate, gained the returning player rights of forward Cory Jefferson in a three-team swap with the Agua Caliente Clippers and the Legends, according to another G League post. The Sixers waived Jefferson on October 13th.

We have more from the G League:

The Los Angeles D-Fenders of the D-League traded for DeJuan Blair, according to Eric Pincus of Basketball Insiders. Adam Johnson of D-League Digest shed further light on the deal, reporting that the Texas Legends acquired a future draft pick in exchange for Blair. A seven-year veteran of the NBA, Blair signed to play with the Legends on January 17, averaging 10.6 points through six games with Texas.

Anthony Davis left today’s game versus the Pacers after injuring his right hip and left thumb. The X-rays he received on both areas came back negative, according to the team’s Twitter feed. Davis hurt his left hip last week against the Knicks, which forced him to miss the ensuing contest against the Nets. The Pelicans won’t play again until Wednesday, so the team will have a couple of days to evaluate Davis’ latest ailment. The big man has only missed three games this season, though he missed parts of six other contests because of various injuries.

DeJuan Blair To Play In China

Confirming international reports from earlier in the week, DeJuan Blair‘s agent, Happy Walters, confirmed that his client will head to China for the upcoming season. According to international basketball reporter David Pick (via Twitter), Blair has signed with Jiangsu Tongxi of the Chinese Basketball Association.

A former second-round pick, Blair was a solid backup for the Spurs during his first four NBA seasons, but has seen his production slip along with his playing time in recent years. After spending a year in Dallas, the veteran big man played for the Wizards the past two seasons.

In 2015/16, Blair appeared in 29 games, averaging just 2.1 PPG and 2.0 RPG while shooting a career-low 41.2% from the floor. The 27-year-old was sent to Phoenix in the deadline deal that saw Markieff Morris head to Washington, and the Suns subsequently waived him, ending his season early.

In China, Blair will be joining a team that also signed Jared Cunningham last month. Blair and Cunningham will be tasked with helping to reverse the fortunes of a club that finished with a 12-26 record in CBA play last season.

THURSDAY, 5:15pm: The Suns will waive newly acquired power forward DeJuan Blair, Paul Coro of The Arizona Republic reports. The news that Phoenix would waive Blair or Kris Humphries was first relayed by Jorge Castillo of The Washington Post. Blair was shipped to the Suns along with Humphries in exchange for Markieff Morris earlier today.

Blair is earning $2MM this season, the remainder of which Phoenix will be on the hook for. The power forward is under contract for 2016/17, but that salary is non-guaranteed, so the Suns won’t have any impact on their salary cap for next season as a result of this move. 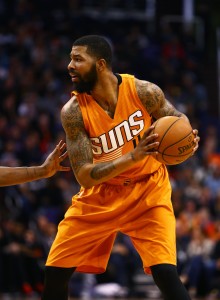 7:20pm: The Suns have traded Markieff Morris to the Wizards for Kris Humphries, DeJuan Blair and Washington’s top-nine protected 2016 first-round pick, the teams announced. Phoenix is reportedly set to waive Blair. It’s a swap that ends a months-long saga involving Morris, who demanded a trade over the summer and recanted that stance, at least publicly, before the season, saying as late as Wednesday night that he wanted to stay in Phoenix.

Washington wasn’t prominent among the several teams linked to Morris since the summer, a group that included the Pelicans, Rockets, Pistons and Raptors. Instead, the Wizards were among the teams linked to Ryan Anderson and other, mostly reserve big man options, before coming away with one of the season’s most talked-about trade candidates.

“Markieff is a versatile, young power forward who brings athleticism and physicality along with a good shooting touch,” Wizards GM Ernie Grunfeld said in the team’s statement. “He will be a very good addition to our team as we make our playoff push and gives us a proven starter at that position for the next several years.”

Morris, who’s facing felony aggravated assault charges for his role in a January incident, is under contract for three more seasons after this one at an average of $8MM a year. Humphries is making $4.4MM this season with a non-guaranteed $4.63MM salary for next year. Blair has $2MM coming his way this season, but next year’s $2MM salary is non-guaranteed, just as with Humphries. So, this move compromises Washington’s cap flexibility for this summer, when D.C. native Kevin Durant will be a free agent. The Wizards nonetheless still project to have enough room to offer the max to Durant, according to Eric Pincus of Basketball Insiders (on Twitter).

The $7.4MM on the books for Morris next season brings Washington’s guaranteed salary commitments to about $45MM, and that, plus a roughly $14MM cap hold for Bradley Beal and at least about $3.3MM in other cap holds, leaves room for Durant’s projected $24.9MM max beneath the projected $89MM cap. A higher cap of $95MM, which some forecast, would lift Durant’s projected max somewhat higher too, but not by as much, giving the Wizards even more breathing room.

The Wizards will hope for a return to form for Morris, the 13th overall pick from the 2011 draft whose numbers are off sharply this season. His 3-point shooting is a career-worst 28.9%. Humphries added a 3-point shot to his game this year and made 34.3%, but injuries have limited him to only 28 games this season, and his appearance against the Knicks last week was his first since January 3rd. Blair was out of the rotation for most of his year and a half with Washington, averaging only 6.9 minutes per game combined between this season and last.

Phoenix moves on from a tumultuous relationship that seemed to come to a head in the wake of the offseason trade that sent his brother to the Pistons. I chronicled the back-and-forth between Morris and the Suns when I examined his trade candidacy last month.

Today’s swap adds $1.56MM to Washington’s payroll, bringing the Wizards to only about $1MM shy of the tax line. It also allows the Suns to create a trade exception for that $1.56MM amount.

Shams Charania of The Vertical on Yahoo Sports first reported the deal. TNT’s David Aldridge relayed that a first-round pick would go to Phoenix (Twitter link) and Paul Coro of The Arizona Republic had news of the details of the pick (on Twitter). Marc J. Spears of The Vertical on Yahoo Sports reported that Humphries and Blair were Suns-bound, while Jorge Castillo of The Washington Post added that one of them would be waived (Twitter link). RealGM confirms that the pick going to Phoenix is Washington’s own.

Celtics president Danny Ainge said he will continue to have contract extension conversations with the agents for forwards Tyler Zeller and Jared Sullinger, but he added “there’s nothing imminent,” Adam Himmelsbach of the Boston Globe reports.

The two players are eligible for rookie scale extensions between now and November 2nd. Ainge reportedly began negotiating with both players’ camps in August.

Here is more out of the Eastern Conference: