Former Mavericks guard Jalen Brunson expected to stay with the franchise for a long time, he revealed on JJ Redick’s The Old Man & The Three podcast (Twitter link). Instead, Brunson wound up signing with the Knicks this month, inking a four-year, $104MM deal.

“I loved my time in Dallas. I thought I was going to be in Dallas for a long time,” Brunson said. “I started having a monster season. I went to them before they officially offered it to me, and by the end, it was kind of too late.”

As has been previously reported, Brunson was interested early in the 2021/22 season in the same four-year, $56MM extension Dorian Finney-Smith eventually signed, but by the time the Mavericks offered it after the trade deadline, Brunson had outperformed it.

“The business came knocking at the door, and so it was time to at least look [in free agency]. I had to do my due diligence and look to see what was out there.”

Brunson is coming off a season in which he averaged a career-high 16.3 points per game. He was a secondary creator alongside Luka Doncic, also averaging 4.8 assists and shooting an efficient 50%.

Rockets rookie power forward Usman Garuba has great expectations for the future of fellow Houston first-year player Jalen Green, projecting Green’s scoring to ascend in the coming seasons, per Raul Barrigon of HoopsHype. The second pick in the 2021 draft, Green averaged 17.3 PPG on .426/.343/.797 shooting across 67 contests this year.

“He’ll be an All-Star for sure,” Green raved. “And I think he’s going to be the NBA’s leading scorer in a few years. We have to help him to achieve those goals. He’s by far the player that has surprised me the most this year. We all know how good was Anthony Edwards this season, right? Green will play like him next year, maybe even better.”

The 6’8″ Garuba, selected with the No. 23 pick by Houston in the 2021 draft, did not get a ton of run during his first year on a developing Rockets club. The 20-year-old averaged just 10.0 MPG across 24 games in 2021/22. He confirmed his interest in a return to the Summer League and to Spain during the 2022 offseason, with the blessing of the Houston front office.

“What I need now is to play games,” Garuba said. “After a season where I suffered some injuries, I started to play regularly by the end of March. Just when we played the last game I was like ‘Is that it? I want to play more!’ The Rockets know that if I’m healthy, I want to play for the Spanish team (in EuroBasket) – if they call me – and they’re OK with it.”

The Mavericks bounced back in Friday night’s Game 3 with a 103-94 victory over the Suns, writes Tim MacMahon of ESPN. Jalen Brunson, who struggled in the first two games of the series, scoring a combined 22 points on just 9-of-28 shooting, led the way with a game-high 28 points on 10-of-21 shooting.

“I kind of found myself playing with a little bit more hop in my step, getting to spots quicker and making decisions faster,” Brunson said. “Decisions came from me just being aggressive. My teammates just kept giving me confidence to go make plays, and I just kept doing that. … I found a way to bounce back tonight, but I just can’t be satisfied with this.”

“The first or second possession, he was diving on the floor,” Dorian Finney-Smith said of Doncic. “When you see the best player do that, it kind of sets the mood.”

“I knew I had to do better,” said Doncic, per MacMahon. “I knew I could do better. I think I made a big jump on defense this year. The second half (of Game 2) was horrible by me, and I knew I had to get back to my team and play better defense.”

When Ben Simmons and agent Rich Paul met with Nets leadership – including GM Sean Marks – earlier this week, Simmons told the people in the room that he’s experiencing a “mental block,” which is creating stress that could be exacerbating his back problems, according to Shams Charania of The Athletic.

The setback Simmons experienced prior to his anticipated Nets debut in Game 4 of the team’s first-round series vs. Boston was initially described as a physical one — he was said to be suffering from renewed back pain. But Charania’s report suggests there are still mental obstacles to clear before Simmons returns to the court.

Reporting this week from Jake Fischer of Bleacher Report and Michael Scotto of HoopsHype backs up that idea. Fischer wrote that it’s “quite clear that the mental aspect of Simmons’ return to game action is the biggest hurdle” he has to overcome, while Scotto has heard from a source close to Simmons that the 25-year-old is “going through it right now mentally.”

According to Charania, Nets officials told Simmons in this week’s meeting that the franchise is willing to do whatever is necessary to support him, and Scotto hears that the team has indeed been “supportive at every turn,” making the three-time All-Star more comfortable than he was in Philadelphia. Simmons didn’t end up making it back this season, but Scotto’s source is “very confident” he’ll return to action next season.

After mostly sitting out last week’s trade deadline – with the exception of a very minor deal involving KZ Okpala – the Thunder are still about $23MM below the $101.2MM salary cap floor for 2021/22, John Hollinger writes for The Athletic.

As Hollinger explains, the Thunder’s situation is a “very hot topic in the agent world,” since teams are required to either spend to the salary floor or pay the difference to their players. Assuming Oklahoma City doesn’t try to get to the floor by signing free agents to deals that include oversized first-year salaries, the team could end up paying about $1.5MM to each of its own players at season’s end.

Hollinger believes this latter scenario is more likely than the Thunder spending big on free agents in the next couple months. Recent European imports who have received big late-season free agent contracts, such as Gabriel Deck and Luca Vildoza, haven’t exactly worked out, and it’s not OKC will feel the need to be a major player on the buyout market.

More importantly, even if the team is required to pay its own players at the end of the season to reach the salary floor, those payments won’t count toward the cap. In other words, the Thunder could still take upwards of $31MM in cap room into draft night, giving them the ability to make trades in June that other clubs wouldn’t be able to accommodate. 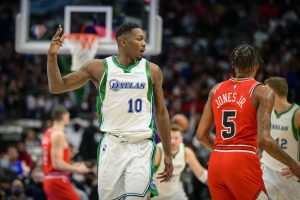 Wojnarowski suggests it’s worth $55.5MM, though we’ll have to wait for the official details to confirm if that entire amount is guaranteed. The deal will include a fourth-year player option and a trade kicker, Woj adds.

The new deal will tack four years onto Finney-Smith’s expiring contract and will be worth $52MM, according to Marc Stein (Twitter link).

Shams Charania of The Athletic (Twitter link) also reports that $52MM figure, though MacMahon says (via Twitter) it’ll be in the $55MM range, so perhaps there will be incentives that could affect the precise value of the deal.

Earning just $4MM this season, Finney-Smith has been a bargain for the Mavs, but he was on track for unrestricted free agency this summer. According to MacMahon (Twitter link), the team didn’t want to risk losing one of its most valuable role players and best locker-room guys in the offseason.

The first-year salary in a veteran contract extension can be worth up to 120% of the salary in the final year of the player’s previous contract or 120% of the NBA’s estimated average salary, whichever is greater. In Finney-Smith’s case, that meant he was eligible to make up to $55.56MM over four years on an extension.

Estimates on Finney-Smith’s next deal had varied in recent weeks, with one report stating he was unlikely to receive more than the mid-level exception (about $10MM per year), while another suggested he may seek more than $15MM annually. Ultimately, he and the Mavs split the difference, agreeing to a figure slightly below his in-season maximum in order to lock a new deal in early.

With Finney-Smith’s free agency no longer a concern, Dallas will be able to focus on working out a new deal with point guard Jalen Brunson. Like Finney-Smith, Brunson is currently extension-eligible, but he seems unlikely to settle for a four-year, $55.56MM deal, since he’s expected to draw interest from multiple teams, including the Pistons and Knicks, as a free agent this summer.

Asked on Thursday night whether the Mavericks will go shopping on the buyout market, general manager Nico Harrison said he believes the team’s roster is “set,” as Brad Townsend of The Dallas Morning News tweets.

Dallas has long been viewed as a potential landing spot for buyout candidate Goran Dragic, but the team’s acquisition of Spencer Dinwiddie and Harrison’s post-deadline comments suggest a pursuit of the Slovenian may no longer be in the cards, tweets Tim MacMahon of ESPN.

According to Marc Stein (Twitter link), Dragic and the Spurs may take a little time to negotiate a buyout agreement. If and when the veteran point guard becomes available, he’ll likely have suitors who are able to offer him a more significant role than Dallas, Stein notes.

The Mavericks have made Dwight Powell available, but they remain uninterested in moving Jalen Brunson or Dorian Finney-Smith, reports Matt Moore of ActionNetwork.com. If those two players are off the table, Dallas may have a hard time finding a deal that significantly upgrades its roster.

According to Moore, Tim Hardaway Jr., who is out indefinitely due to a foot injury, is the player the Mavericks have shopped most aggressively. Hardaway was having a down year prior to his injury and is on a sizable long-term contract ($53.7MM for three years after this season), so his value will be limited.

Still, Moore notes that Pacers head coach Rick Carlisle is a big fan of Hardaway, whom he coached in Dallas. Moore has also heard that the Wizards and Mavericks discussed a deal involving Hardaway and Spencer Dinwiddie, though a source tells Moore that the two sides didn’t make much progress.

Here are a few more trade rumors from around the NBA:

Veteran Rockets point guard D.J. Augustin, 34, hopes to remain in Houston through the NBA trade deadline, per Jonathan Feigen of the Houston Chronicle. Should the Rockets opt not to pick up his partially-guaranteed deal this summer, the rebuilding club’s oldest player could become a free agent. The 5’11” guard is averaging 5.4 PPG and 2.2 APG in just 15.0 MPG this season.

At times this season, head coach Stephen Silas has opted not to play Augustin at all, in favor of giving the team’s younger prospects more run. Augustin does concede that he would like a consistent role in the Rockets’ rotation, but accepts that that may not be what Houston requires.

“I would like minutes, period,” he said. “That’s not my role right now with this team.”

Nuggets forward JaMychal Green and guard Facundo Campazzo are considered available in trade talks, reports Jake Fischer of Bleacher Report. Mike Singer of The Denver Post also recently identified Green and Campazzo as two players the Nuggets would probably be willing to move as they seek a defensive-oriented small forward.

The Nuggets’ ability to trade Green could be complicated by his ability to veto any trade that involves him. A source tells Singer that the veteran forward wouldn’t accept a move to a non-contending team.

Here are a few more trade rumors, courtesy of Fischer: