The Kings have finalized their coaching staff for Mike Brown‘s first season in Sacramento, according to a press release from the team.

Robbie Lemons (senior director of coaching analytics and strategy), Charles Allen (head video coordinator/special assistant to the head coach), and Garrius Adams (assistant video coordinator) will fill out the staff, which Brown referred to as a “diverse and talented group.”

Roy Rana, Mike Longabardi, and Rico Hines are among the veteran assistants on former head coach Alvin Gentry‘s staff who won’t be returning to Sacramento for the 2022/23 season. Longabardi joined the Hawks, Hines joined the Raptors, and Rana got a job coaching a team in Japan.

Christie, 52, played 15 seasons in the NBA, including a five-year run with the Kings. He’s the lone holdover from Luke Walton‘s staff in 2021/22, Christie’s first season as an NBA assistant, and Stein reported that retaining Christie was a priority for Sacramento’s brass.

Triano, 63, is the former head coach of the Raptors and Suns. He also coached the Canadian national team from 1998-2004, and most recently served as an assistant in Charlotte under James Borrego, who was fired in April.

Loucks, 32, played college ball for Florida State prior to making several international stops. During the ’21/22 season he worked for Phoenix in basketball strategy and personnel evaluation, and he previously worked with Brown in Golden State and with the Nigerian national team.

Sacramento announced on May 18 that former Nuggets assistant Jordi Fernandez will be Brown’s associate head coach, so the Kings have now finalized deals with four coaches on Brown’s staff.

While many Lakers fans hope they’ve seen the last of Russell Westbrook in a Los Angeles uniform, the front office is proceeding as if Westbrook will remain a part of the team.

Head coaching candidates that the Lakers have interviewed have been asked to discuss how they would use the enigmatic point guard in their system, Sam Amick of The Athletic reports. It appears that maximizing Westbrook’s impact after his disastrous 2021/22 season is considered an important part of the job, Amick adds.

This could be an indication of Phil Jackson’s input on the Lakers’ search, since Jackson is known to have an affinity for Westbrook.

Serge Ibaka hasn’t received regular playing time as of late for the Clippers, Mirjam Swanson of the Orange County Register writes. Ivica Zubac and Isaiah Hartenstein have received the bulk of the minutes in the post since Ibaka returned to action after recovering from back surgery.

Ibaka has extra incentive to get a boost in playing time — he’ll be an unrestricted free agent after the season.

2:30pm: Christie will take over as the Kings’ acting coach while Gentry is unavailable, a source tells Sam Amick of The Athletic (Twitter link).

11:01am: Kings head coach Alvin Gentry, who took over last month when the team dismissed Luke Walton, has tested positive for COVID-19, according to ESPN’s Adrian Wojnarowski (all Twitter links). Gentry figures to miss a few games, with one of his assistants taking over as an interim coach to the interim coach.

According to Wojnarowski, the Kings canceled their morning shootaround on Wednesday and are conducting COVID-19 tests to see if any other players or coaches have contracted the virus.

Gentry tells Wojnarowski that he has been essentially asymptomatic, outside of having a scratchy throat. Assistants Mike Longabardi and Doug Christie are the most likely candidates to replace him on the sidelines for the short term, Woj adds.

Gentry has led the Kings to a 5-6 record since taking the reins from Walton in November. Sacramento lost all three games on its recent road trip, prompting Gentry to state after Monday’s loss in Toronto that the team needs to find a way to “right the ship.” The Kings begin a three-game home stand on Wednesday against the struggling Wizards, the Ja Morant-less Grizzlies, and the 10-16 Spurs, so there’s some bounce-back potential there.

Gentry is the second head coach to enter the NBA’s health and safety protocols in the last week, joining Rick Carlisle of the Pacers.

Alvin Gentry wanted to avoid the “interim” tag after taking over head coaching duties when the Kings fired Luke Walton on Sunday, according to Sam Amick of The Athletic.

Sources tell Amick that Gentry was unsuccessful because the front office believed it had another viable candidate in first-year assistant coach Doug Christie. Even though general manager Monte McNair, assistant GM Wes Wilcox and chief strategy officer Joe Dumars all supported Gentry, having Christie as an option gave the organization leverage in its negotiations with Gentry.

Gentry received a raise as part of his new duties, Amick adds, and he has a contract that runs through the end of next season. However, his future as the head coach in Sacramento will depend on how successful he is at turning the team around. Amick notes this is the fourth time in his career that Gentry has received this type of promotion, and he was able to earn long-term coaching stints with both the Pistons and Suns.

As the lead assistant, Gentry already had a huge influence on Sacramento’s offensive strategy, so other than possibly increasing its pace, the team won’t look much different with him in charge.

1:56pm: Alvin Gentry will become the interim coach of the Kings, per Sam Amick of The Athletic (Twitter link). He was previously serving as associate head coach under Walton.

Gentry’s last stint as a head coach was with the Pelicans from 2015-20, compiling a 175-225 record in five seasons before being fired. He has a total win-loss record of 510-595 across 17 partial seasons with the Heat, Pistons, Clippers, Suns and Pelicans. His most successful team was the 2009/10 Suns, who reached the Western Conference Finals and lost to the eventual champion Lakers in six games.

12:06pm: The Kings have fired head coach Luke Walton, according to Adrian Wojnarowski of ESPN. 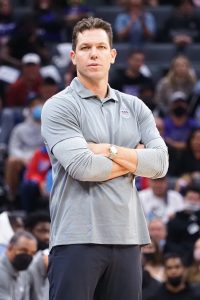 The Kings have struggled in the early portion of the season, losing seven of their past eight games and currently sit with a 6-11 record. They lost some seemingly winnable games during the slide, including games to the Pacers, Spurs, Thunder, and Raptors.

The team went 31-41 in each of the past two seasons under Walton, so he compiled a 68-93 overall record with the Kings. He’s under contract for one more year beyond this season and the team will be on the hook for the remainder of his salary.

Woj also relays that Alvin Gentry, the team’s associate head coach, is a strong candidate to serve as the interim coach. However, he hedged that statement by noting that a decision has yet to be made (Twitter link).

We noted earlier today that Kings fans have been regularly chanting “fire Luke Walton” at home games and there was a report last week that indicated the head coach was firmly on the hot seat. There has been increasing urgency for the Kings to snap their 15-year playoff drought. The front office views the current roster as one capable of making the postseason, hence why Walton was fired after a 6-11 start.

It’s tough to see the team making the playoffs outright as a top-six seed, especially having started five games under .500. There are definitely talented players among the group, but the fit is questionable. It will be interesting to see if this decision has any impact on trade talks, or if the Kings will stick with the roster they have.

Sacramento was consistently a bottom-tier defensive team under Walton; the club ranked 20th in defensive rating in 2019/20, 30th last season, and 23rd through 17 games this season. It ranked 27th, 30th, and 24th in total rebounds across the same time period. Obviously not all of that is on the coach, but it’s partly why the Kings have struggled to compete at the level they were hoping for.

A total of 56 free agents reached contract agreements with teams around the NBA on Monday, but not a single one of those players is signing with the Grizzlies. That’s by design though, according to Evan Barnes of The Memphis Commercial Appeal, who writes that Memphis’ plan was always to have a quiet free agent period and focus on negotiating a potential contract extension with Jaren Jackson Jr.

One of 24 players eligible for a rookie scale extension this offseason, Jackson won’t get a maximum-salary deal like Luka Doncic, Trae Young, and Shai Gilgeous-Alexander. But Grizzlies head of basketball operations Zach Kleiman has suggested that the former fourth overall pick remains very much in the franchise’s long-term plans.

“I think we’re going to be our best selves over time with Jaren,” Kleiman said after the draft, per Barnes. “Spacing the floor, attacking, creating, defensively taking advantage of the versatility he brings to the table.”

Here’s more from around the West as we wait for day two of free agency to start heating up: