8:36pm: Hawks head coach Nate McMillan said Hunter and Collins will undergo MRIs on Thursday, according to Brad Rowland of Locked On Hawks (Twitter link). McMillan also confirmed that Hunter aggravated the same injury he was dealing with heading into the game.

7:32pm: Hawks starting forwards De’Andre Hunter and John Collins exited Wednesday’s game against Orlando with injuries and were ruled out for the remainder of the contest, Atlanta announced (via Twitter).

Collins, the power forward, sustained a left ankle sprain, while Hunter, the small forward, is dealing with right thigh soreness. As Gabe Burns of The Atlanta Journal-Constitution tweets, the Hawks were up 20 points at halftime, so it’s possible that may have contributed to the decision to sit both players.

The Hawks announced prior to the game that Hunter was available but dealing with right hip flexor soreness, and considering the hip flexor is located at the top part of the thigh, it’s reasonable to speculate that there could be a correlation (Twitter link via Lauren L. Williams of The Atlanta Journal-Constitution). The team also announced that reserve wing Justin Holiday had entered the health and safety protocols and was out Wednesday.

Guard Gary Harris was injured during Wednesday’s game as well, experiencing right hamstring tightness that caused the Magic to rule him out for the remainder of the contest (Twitter link). Harris was making his sixth appearance in 2022/23 after offseason surgery to repair a torn meniscus caused him to miss Orlando’s first 15 games.

We’ll have to wait for more updates to determine whether Hunter, Collins or Harris might miss more time with their respective injuries.

The 11-10 Hawks had lost three in a row heading into Wednesday’s contest but are in a strong position to snap that skid, currently leading 108-89 with eight minutes remaining. The Magic will have dropped six straight if they wind up losing. Their current record is 5-16, the second-worst mark in the NBA.

Magic’s Banchero Out Another Week; Harris Could Make Debut Friday

Magic forward Paolo Banchero, the No. 1 overall pick of this year’s draft, will miss his fifth consecutive game Friday against Chicago with a sprained left ankle.

Banchero told Khobi Price of The Orlando Sentinel (subscriber link) prior to Wednesday’s loss to Minnesota that he’s making progress in his recovery, but he’s still experiencing soreness and expects to miss at least another week to with the injury.

As Price writes, Banchero sustained the injury late in a November 7 loss to Houston. The former Duke big man has looked every bit the part of a No. 1 pick, averaging 23.5 points, 8.3 rebounds and 3.6 assists through 11 games (34.6 minutes per night).

On a positive note, guard Gary Harris could make his 2022/23 season debut for the Magic on Friday, Price writes in another article for The Orlando Sentinel (subscription required). Harris has been sidelined since he tore his left meniscus in late August, which required surgery. He  has officially listed as probable against the Bulls.

The 28-year-old shooting guard signed a two-year, $26MM extension with Orlando at the end of June just before free agency opened. The second year is non-guaranteed.

After missing Wednesday’s contest with a right plantar fascia strain (Twitter link), forward/center Wendell Carter Jr. is also listed as probable vs. Chicago, Price notes (via Twitter). Head coach Jamahl Mosley said it’s something Carter has been dealing with for a while.

Magic guard Gary Harris feels like he’s close to playing again following arthroscopic surgery during the offseason to repair a torn meniscus, writes Khobi Price of The Orlando Sentinel. Harris has been participating in full-court games with coaches and taking part in pre-game shootarounds as he prepares to make his season debut.

“I’m moving around a little bit right now,” he said. “I’m really trying to get my timing back. Get back in basketball shape. I’m testing stuff out each day. I get more comfortable around the court.”

Harris who signed a two-year, $26MM extension with Orlando before the start of free agency, has been plagued by injuries throughout his career. But the meniscus tear was the first one that required him to undergo surgery.

“It’s just different,” Harris said. “Different movements. It’s something I have to get back comfortable and familiar with after my first one. Just seeing how my body responds.”

The Magic issued a press release this week announcing a long list of promotions and additions within their basketball operations department.

Among the most noteworthy of those front office changes was the promotion of Pete D’Alessandro – a former high-ranking executive in Sacramento and Denver – to the role of associate general manager. D’Alessandro had previously been an assistant general manager for Orlando.

David Bencs has been promoted to fill D’Alessandro’s old position as an assistant GM, while Adetunji Adedipe was named the Magic’s new vice president of player personnel. Kevin Tiller, meanwhile, has become the new GM of the Lakeland Magic, Orlando’s G League affiliate.

Here’s more on the Magic:

Superstar guard Stephen Curry has no plans of leaving the Warriors, but he did admit which team he’d be willing to play for if that time ever came: the Hornets. Curry made his comments when the Charlotte City Council presented him with the key to the city this week (video link).

“I’ve always said I wanted to finish my career at Golden State because of how much it means and the experiences and teammates and the journey we’ve been,” Curry said. “Everybody asks me, ‘You wanna play one year for the Hornets and come back?’

“I am not breaking any news right now, I’m not making any promises. All I would say is if there was a team that I did want to play for that was not named the Warriors, that would be it.”

Curry grew up in Charlotte, North Carolina, where his father, Dell Curry, played 10 seasons in the NBA. But it remains unlikely that he ever leaves the Warriors. Through his 13 seasons, he has been named an All-Star eight times, earned two Most Valuable Player awards and won four NBA championships with the franchise.

Here are some other notes from the Southeast:

Magic wing Gary Harris has undergone arthroscopic surgery on his injured left knee, the team announced in a press release. Harris, who recently tore his meniscus, underwent a meniscectomy, according to the Magic. 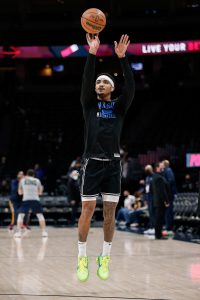 The recovery period for a torn meniscus can vary significantly depending on the severity of the injury and the form of treatment. When a player undergoes surgery to repair the tear, he typically misses several months — that’s how meniscus tears for Jaren Jackson Jr. and Collin Sexton have been treated within the last couple years, limiting Jackson to just 11 games in 2020/21 and Sexton to 11 appearances in ’21/22.

However, a meniscectomy involves removing either the full meniscus or a part of it, rather than repairing it. The procedure typically requires a shorter recovery period.

The Magic said in their announcement today that Harris’ return to the court will depend on how he responds to rehabilitation and treatment. It’s possible his absence will be measured in weeks rather than months, though Orlando has shown a tendency to take a conservative approach to its players’ recovery timetables.

Only the first year of Harris’ new contract is guaranteed, so he’ll be motivated to get healthy and have a good season. A strong showing in 2022/23 would either convince the Magic to retain him for ’23/24 or would set him up for another solid payday as a free agent next summer.

After three years of working for an NBA opportunity, Simisola Shittu may be getting his best chance with the Magic, writes Tony East of Forbes. A report earlier this month indicates that Shittu will be in training camp with Orlando, likely on an Exhibit 10 contract.

The 22-year-old was considered a top prospect when he enrolled at Vanderbilt, but he suffered a torn ACL that healed just in time for his lone collegiate season. He went undrafted in 2019 and spent two years in the G League before heading to Israel. He played for the Pacers in this year’s Las Vegas Summer League, earning himself a chance with the Magic.

“I’m resilient,” he said. “Certain cards don’t fall the right way or anything like that. But at the end of the day, I feel like I’ve just continued to grow from it and gotten better each year.”

Magic guard Gary Harris has suffered a torn meniscus in his left knee, according to ESPN’s Adrian Wojnarowski (Twitter link). While it’s unclear how and when he sustained the injury, Harris will undergo further evaluation to determine how much time he’ll miss.

The 27-year-old Harris was a key part of Orlando’s rotation last season. He averaged 11.1 points per game in 61 contests, starting in 30 of them. He also shot 43% from the floor and 38% from downtown.

Aside from his offensive production, the Magic likely value Harris for his locker room leadership. He’s currently the second-oldest player on a young roster, trailing only Terrence Ross (31).

Harris has dealt with multiple injuries throughout his career. Last season was the first time he played more than 60 games since the 2017/18 campaign, which helped him land a two-year, $26MM extension from Orlando. Still, the Magic finished just 22-60 on the year and are expected to continue their rebuilding phase.