There has been speculation that the Nets might consider signing Carmelo Anthony to help fill out their roster, an unidentified league executive tells Sean Deveney of Heavy. The signing could be a way to help placate Kevin Durant if Brooklyn isn’t able to trade him soon.

Anthony, 38, spent last season with the Lakers on a one-year, minimum-salary contract. He averaged 13.3 points and 4.2 rebounds in 69 games, but L.A. filled out its bench with younger players this offseason and there may not be room to bring Anthony back.

The Nets are also likely to sign another center, but the move may not come for a while.

“They need another big guy, but they’re not feeling a lot of pressure as far as filling that spot,” the executive said. There are veterans they can sign this month or even early next month — Dwight Howard would be the obvious one, maybe Hassan Whiteside. Cody Zeller is out there, too. They want to see what they have with Nic Claxton, but they want some insurance there, too. And they’re going to play (Ben) Simmons there quite a bit in small ball lineups.”

The Rockets will target a backup center when free agency opens at the end of the month, writes Jonathan Feigen of The Houston Chronicle. The team is short on reliable big men after agreeing to trade Christian Wood to the Mavericks, and although Houston will receive Boban Marjanovic in the deal, the front office plans to explore other options on the free agent market.

Feigen identifies Nic Claxton as one possibility, saying the Nets likely wouldn’t match a full mid-level exception offer (starting at $10MM+) because of luxury tax concerns. Claxton was a part-time starter this season and put up career-best numbers with 8.7 points and 5.6 rebounds per night.

There’s more on the Rockets:

Lakers coach Frank Vogel said Anthony Davis is progressing each day as he inches closer to a return to action, as Mike Trudell of Spectrum SportsNet tweets.

“Anthony has had a good week … He’s had a productive week,” Vogel said.

Davis continues to do spot shooting, which began on Monday. Davis originally suffered a right foot strain on February 16, so he’s a little more than four weeks into his four-to-six week recovery timetable.

Lakers reserves Carmelo Anthony and Wayne Ellington were both unable to play on Friday at Toronto due to non-COVID illnesses, Trudell relays (via Twitter).

Talen Horton-Tucker missed the game as well, per Blake Murphy of Sportsnet (Twitter link). Horton-Tucker has been battling a Grade 2 ankle sprain.

Here are more injury-related updates from around the NBA:

Pistons big man Kelly Olynyk, who returned this week after missing more than two months with a knee injury, has entered the NBA’s health and safety protocols, tweets James Edwards III of The Athletic.

Olynyk, who signed as a free agent over the summer, played in two games before being sidelined again, bringing his season total to 12. He’s averaging 12.6 points and 5.5 rebounds in 22.6 minutes per night.

Olynyk joins teammates Jerami Grant and Luka Garza in the protocols, as the Pistons and Grizzlies are the only teams with three players currently affected by COVID-19.

With Jazz reserve center Hassan Whiteside unavailable while recovering from a concussion, Utah struggled to find much success in its small-ball lineups when All-Star center Rudy Gobert went to the bench, writes Eric Walden of the Salt Lake City Tribune. Walden notes that lineups with 6’8″ reserve forward Rudy Gay playing the five were minus-19 across 19:52 of action.

“It’s different without having a traditional big in Hassan or Rudy [Gobert] back there, because we base our defense solely on forcing everybody to our big,” All-Star point guard Mike Conley said. “Everybody’s kind of activated into more of a help-the-helper situation, as opposed to trying to make it a two-on-two situation with the big and the guard like we’re accustomed to doing.” Gay signed a two-year, $12.1MM contract with the team this summer.

Jazz center Rudy Gobert and Pacers center Myles Turner engaged in a skirmish during Thursday’s game in Utah, briefly wrestling with one another after getting tangled up following a Gobert drive (video link).

As Andy Larsen of The Salt Lake Tribune details, the incident resulted in ejections for Gobert and Turner, as well as for Joe Ingles and Donovan Mitchell. Ingles was ejected for shoving referee Ed Malloy while trying to break up the fight; Mitchell was said to be “acting as an instigator and escalating the situation.” It’s unclear if any players will face suspensions as a result of the incident, but fines, at least, seem likely.

After the game, Mitchell and Gobert were focused more on the way the game was being officiated than concerns about forthcoming penalties. Gobert said referees are “allowing guys to do way too much s–t” this season and Mitchell agreed.

“It’s really at a point now, especially tonight, where the referees are allowing things to get out of hand,” Mitchell said, per Sarah Todd of The Deseret News. “Both teams, we’re competitors and we’ll play through contact and talk s–t and do whatever. But at some point it’s continuing to build and you can sense that.”

Here’s more out of Utah:

Hassan Whiteside‘s time with the Heat was often stormy, but he doesn’t hold any grudges against his former team, writes Anthony Chiang of The Miami Herald. Whiteside, who signed with the Jazz during the offseason, said he remains in contact with some of his ex-teammates.

Whiteside revived his career with Miami in 2014/15 after two years out of the league. He was the team’s starting center for five seasons, although he sometimes clashed with Spoelstra about playing time and his role on the team. He was traded to Portland in 2019 and is on his third team since that deal. In Utah, Whiteside has reunited with former teammate Dwyane Wade, who is a part owner of the Jazz.

“It’s a special feeling. Having D-Wade, seeing a familiar face like that,” Whiteside said. “He was a part of me even wanting to come to the Jazz. I don’t know what I would have been without D-Wade. D-Wade, I don’t think he knows how much he means to me.”

AUGUST 6: The Jazz have made it official with Whiteside, announcing his deal in a press release. 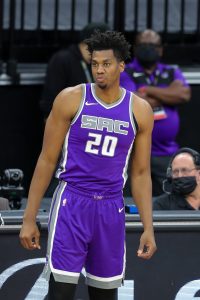 “Hassan is one of the more physically gifted players in the game today and has a vast amount of valuable professional basketball experience,” Jazz GM Justin Zanik said in a statement. “We’re excited to add someone with his skillset and feel he’s a great fit with our current roster.”

AUGUST 3: The Jazz have agreed to a deal with free agent center Hassan Whiteside, reports ESPN’s Adrian Wojnarowski (via Twitter).

Whiteside is coming off his least productive season in seven years, having averaged 8.1 PPG, 6.0 RPG, and 1.3 BPG in 36 games (15.2 MPG) for Sacramento, but he remains a solid shot-blocker and rebounder, especially as a backup center.

The 32-year-old seven-footer signed a one-year deal with the Kings last year but could never get fully on track with his new team. The Jazz will be hoping that in Quin Snyder‘s system, backing up All-NBA center Rudy Gobert, Whiteside will be able to turn things around.

The Jazz recently traded reserve center Derrick Favors to the Thunder in a cost-cutting move, and Whiteside gives them some level of schematic continuity coming off the bench.

The Jazz are believed to be limited to minimum-salary deals after committing their taxpayer mid-level exception to Rudy Gay, so Whiteside’s deal figures to be worth the veteran’s minimum.