Cavaliers head coach J.B. Bickerstaff has talked to president of basketball operations Koby Altman about possible additions to his coaching staff, according to Chris Fedor of Cleveland.com (subscriber-only link), who says Bickerstaff keeps a running list of potential targets that he adds to every year.

Sources tell Fedor that Bickerstaff would be looking for a well-rounded candidate with experience, and wouldn’t necessarily be seeking an offensive coordinator. Fedor identifies Steve Clifford, Paul Hewitt, Chad Forcier, Tyrone Corbin, and David Fizdale as some names to watch, though some of those coaches may not be inclined to leave their current positions for an assistant role with the Cavaliers.

Cavaliers head coach J.B. Bickerstaff was fined $15K on Monday for his public criticism of the league’s officiating, the NBA announced in a press release. Bickerstaff griped about the foul calls on Sunday following a 112-108 loss to Philadelphia in which James Harden and Joel Embiid combined to attempt 32 free throws.

“We deserved to win that game. That game was taken from us,” Bickerstaff said, per Chris Fedor of Cleveland.com. “We did a great job defensively, making their two best players have a difficult time from the field. But one thing you can’t defend is the free throw line. That’s absurd. That’s absurd. Our guys deserve way better than what they got tonight.”

Bulls All-Star Zach LaVine previously said that he won’t know in advance whether he’ll be able to play back-to-back games going forward. Chicago continues to monitor him daily, but coach Billy Donovan said that LaVine’s knee has been feeling much better since the All-Star break (Twitter links via Rob Schaefer of NBC Sports Chicago).

After playing against the Hawks on Thursday, LaVine didn’t appear on Chicago’s injury report on Friday and suited up for both ends of the back-to-back against the Bucks. He finished the game with 30 points, eight rebounds and six assists, but the Bulls dropped their fourth straight in a 118-112 loss. Chicago is now the No. 4 seed in the East with a 39-25 record.

Thunder guard Josh Giddey has been named January’s Rookie of the Month for the Western Conference, while Pistons guard Cade Cunningham earned the honors for the Eastern Conference, the NBA announced on Wednesday (Twitter link). The other nominees can be found here.

The Cavaliers‘ improved play this season has put them in position to be unhappy after a win, writes Chris Fedor of Cleveland.com. Victories have been rare in Cleveland over the past three seasons, but with the Cavs in fifth place in the East at 28-19, coach J.B. Bickerstaff is stressing the importance of a strong performance every night.

That’s why he was upset Saturday after watching his team struggle to put away the Thunder. Bickerstaff was displeased over a lack of effort and an offense that produced 23 turnovers and only 22 assists.

“It’s an understanding of the bigger picture of what we’re trying to get done and the seriousness of every game for us and what it means,” he said. “That’s part of our growth and maturation. There’s games like this where if you lose these games, you’re looking back in April and they matter.”

The Cavaliers awarded coach J.B. Bickerstaff with a lucrative Christmas present, extending him through the 2026/27 season. Continuity on the coaching staff will allow the team’s young core to grow, Kelsey Russo of The Athletic opines. It also ensures that the positive culture Bickerstaff has built will become a fixture.

“It’s meaningful to know that you’re with an organization and with a group of people that believe in you and believe in what we’re building and what we’re working towards,” the Cavaliers’ head coach said. “When you have that support, it just gives you more confidence to go out and do the job that you see fit.”

We have more from thee Central Division:

10:11am: Bickerstaff’s extension is now official, the Cavaliers confirmed in a press release. The team didn’t announce the terms of the deal, simply referring to it as a “multiyear” extension. 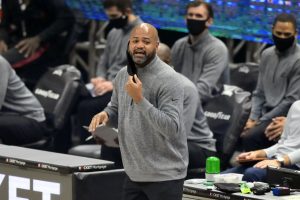 9:53am: The Cavaliers and head coach J.B. Bickerstaff have agreed to a long-term contract extension, according to ESPN’s Adrian Wojnarowski, who reports that the new deal will keep Bickerstaff under team control through the 2026/27 season.

That overall record since Bickerstaff took the reins is somewhat misleading. After going 22-50 last season, the Cavs are off to a 19-13 start in 2021/22, looking as dangerous as they have since LeBron James left the franchise in 2018.

The new-look Cavaliers, led by youngsters Darius Garland, Jarrett Allen, and Evan Mobley and veteran point guard Ricky Rubio have the Eastern Conference’s best defensive rating so far this season. Bickerstaff, who has previous head coaching experience in Houston and Memphis, is being rewarded for the team’s turnaround.

Pistons point guard Cade Cunningham is set to miss Detroit’s entire early-season road trip due to a lingering ankle injury, but could be ready to make his NBA debut on October 30 against the Magic, per Rod Beard of The Detroit News. Cunningham, 20, is apparently still dealing with some soreness.

“Last week, we made the decision to make sure we bring him back gradually, where he’d get some time with the G League team (the Motor City Cruise), practice with them, and get some reps with them,” head coach Dwane Casey said of the top draft pick out of Oklahoma State. “The medical people are holding back — and rightfully so… You don’t want to rush him back if it’s not 100%. That’s the one thing that they want to make sure of, that it was 100%, because there were certain movements he had that were still sore.”

Veteran point guard Brad Wanamaker signed a training camp deal with the Pacers this week and he’s out to prove he deserves a spot on the 15-man roster, David Woods of The Indianapolis Star writes.

“I didn’t come here just to come here,” Wanamaker said. “I came here to compete, show what I’m capable of and try to make the roster.”

Wanamaker has a shot to be the third point man behind Malcolm Brogdon and T.J. McConnell.