Following the elimination of his Puerto Rican team – Cangrejeros de Santurce – from the Baloncesto Superior Nacional (BSN) playoffs this week, veteran guard J.J. Barea said in a Spanish-language interview that he intends to retire as a basketball player, according to Jorge Figueroa Loza of El Nuevo Día (hat tip to Eurohoops). 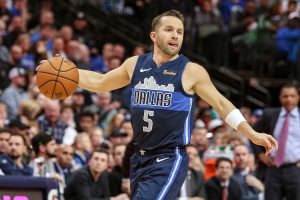 “I’m ready,” Barea said, according to a translation provided to Hoops Rumors. “Last year was tough mentally, and I wasn’t ready. This year I am, and I’m at peace with retiring.”

Barea last appeared in the NBA when he played 29 games in 2019/20 for the Mavericks. He subsequently spent a few months with Estudiantes in Spain at the start of 2021, then joined Cangrejeros de Santurce in his native Puerto Rico last May, re-signing with the team in February 2022.

Barea, who previously played for Cangrejeros de Santurce in 2006, expressed satisfaction that he got to finish his career with the Puerto Rican squad, even though the club was eliminated in the postseason quarterfinals in back-to-back years and a left leg injury prevented the 38-year-old from playing in the last game of the season.

Now that he has retired as a player, Barea said he plans to “take a break from basketball” to mentally recharge. However, he seems likely to end up sooner or later in a coaching role for one of his former teams.

He told El Nuevo Día that he’d liked to remain involved with Cangrejeros de Santurce, and also spoke last summer after working with Dallas’ Summer League team about his interest in a position with the Mavs.

Being involved with All-Star Weekend was a dream experience for several members of G League Ignite, writes Tania Ganguli of The New York Times. Jaden Hardy, Scoot Henderson, MarJon Beauchamp and Dyson Daniels were all selected to participate alongside first- and second-year NBA players in the Rising Stars games. Fanbo Zeng and Michael Foster Jr. were chosen for a shooting competition, but Zeng had to withdraw because of an injury.

“I was nervous before the game before I even got out there, but when I got out there it was kind of relieving,” said Beauchamp, who is projected to be a mid first-round selection in this year’s draft. Beauchamp added that he always watches the All-Star events, “so just seeing myself on the screen is pretty amazing.”

The Ignite team, which serves as an alternative to college for NBA prospects, is only in its second season but is proving to be successful. Two Ignite players, Jalen Green and Jonathan Kuminga, were lottery picks last year and the team continues to attract elite young talent, paying up to $500K per season. The chance to be part of the All-Star experience was a bonus that the NBA offered this year.

“It was just fun to be able to be out there on the court with those young stars really and just being able to go out there and just laugh and compete,” Hardy said.

Dennis Smith Jr., the Mavericks‘ lottery pick a year before the team selected Luka Doncic, quickly bonded with his new teammate upon Doncic’s arrival in 2018, forming an off-the-court friendship. However, Dallas’ front office and then-coach Rick Carlisle didn’t believe the two guards were an on-court fit and were already planning to “blow it up,” according to Tim MacMahon of ESPN, who says Carlisle had wanted to draft Donovan Mitchell in 2017 and had quickly soured on Smith.

In the months before Smith was sent to New York in the Kristaps Porzingis trade, Carlisle was hard on the former N.C. State standout — he accused DSJ of being jealous of Doncic and seemed determined to make him miserable, multiple former players and staffers told ESPN. The treatment was “appalling” to Doncic, who resented Carlisle’s apparent desire to pit him against his teammate and friend, writes MacMahon.

As MacMahon outlines, the Smith situation represented the beginning of years-long tension between Carlisle and Doncic.

For what it’s worth, Smith replied to MacMahon’s article on Twitter and said the details about his time in Dallas were “spot on,” adding, “Y’all don’t even know the half.”

Here are a few more of the most interesting details from the ESPN report, which is worth checking out in full:

12:49pm: Dudley has agreed to join the Mavericks’ coaching staff, tweets Shams Charania of The Athletic.

8:30am: The Mavericks are in advanced discussions with veteran forward Jared Dudley about hiring him as an assistant coach on Jason Kidd‘s staff, according to NBA reporter Marc Stein (Twitter link).

Dudley, 36, has appeared in over 900 NBA regular season games since entering the league in 2007. He began his career in Charlotte, then spent time with the Suns, Clippers, Bucks, Wizards, Suns, Nets, and Lakers over the course of 14 seasons.

However, Dudley has seen his playing time decline significantly in recent years. In 2020/21, he logged just 81 total minutes in 12 games for the Lakers, and a report last week indicated that L.A. wasn’t expected to re-sign him. Now, it seems as if he’s prepared to move onto the next stage of his career.

While Kidd and Dudley never played together, they have plenty of history. Dudley played for Milwaukee in 2014/15 when Kidd was the head coach, and the Hall-of-Fame point guard was an assistant with the Lakers for the past two years.

Kidd’s coaching staff is still taking shape, but it appears he’s making it a priority to add at least a couple assistants with playing experience. J.J. Barea and Tyson Chandler are among the other NBA vets who have been mentioned as possible candidates.

The Mavericks were runners-up to the Heat in the free agency competition for Kyle Lowry, according to Barry Jackson of The Miami Herald. A source tells Jackson that the Mavs were willing to pay what Lowry was seeking and he was intrigued by the possibility of playing in Dallas, but his first choice was to join Jimmy Butler in Miami. Lowry wound up getting $85MM over three years, and joined the Heat in a sign-and-trade.

The Pelicans were also interested in Lowry and were willing to offer $90MM or more for three seasons, Jackson adds. However, Jackson’s source says Lowry didn’t give strong consideration to New Orleans.

Jason Kidd, who has reached a deal to become Dallas’ new head coach, may not be the only former Mavericks point guard patrolling the team’s sidelines in 2021/22. According to Tim MacMahon of ESPN (Twitter link), J.J. Barea has had preliminary discussions about the possibility of joining Kidd’s coaching staff.

Barea has no formal coaching experience, having played in the NBA up until last year and in international leagues during the 2020/21 season. However, as MacMahon observes, the veteran guard has strong relationships with many members of the Mavericks’ organization – including Luka Doncic – and the team missed his presence this past season.

Another member of that 2011 Mavericks title team is also a candidate to join Kidd’s staff, according to Brad Townsend of The Dallas Morning News, who tweets that Jason Terry is in the mix for a role.

Mavericks swingman Tim Hardaway Jr. has had a terrific year for Dallas, but Brad Townsend of the Dallas Morning News wonders if the reserve wing will look for greater opportunity in unrestricted free agency this summer. Hardaway is in the final season of a four-year, $71MM deal he initially inked with the Knicks.

Hardaway has been primarily a bench contributor to the Mavericks this season, having been a reserve in 49 of the 70 games he has played. Townsend notes that Hardaway’s play has positioned him as a potential Sixth Man of the Year candidate for 2020/21. “If I go on the bench, I think this bench that we have is deep,” Hardaway said. “Whether I’m starting, whether I’m coming off the bench, it’s just me trying to be aggressive and be the best basketball player I can be for the team.”

There’s more out of Dallas:

Veteran guard J.J. Barea has returned to his native Puerto Rico, having signed with Cangrejeros de Santurce, as our JD Shaw relays (via Twitter). The return of Barea, who previously played for the club in 2006, coincided with an announcement that the team is now co-owned by Puerto Rican music star Bad Bunny.

After being waived by the Mavericks in December, Barea spent most of the 2020/21 season with Estudiantes in Spain, having just left the club earlier this month. The 36-year-old was previously said to be determined to make it back to the NBA, but either those plans changed or there were no opportunities available. Instead, he’ll head back to Puerto Rico, where his professional career first begin in 2001.

Due to family-related commitments, veteran guard J.J. Barea had to leave Spanish club Estudiantes before the team’s season formally ends, he announced on Instagram (hat tip to Sportando). Barea signed back in January to spent the season in Spain after being waived by Dallas in December.

Reports earlier this year indicated that Barea’s contract with Estudiantes included an NBA out and that he remained “determined” to make it back to the NBA. Teams technically have until Sunday to sign free agents, and Barea would be postseason-eligible if he returns, but there has been no indication so far that an NBA club intends to sign him.

Here are a few more odds and ends from around the league:

J.J. Barea’s Contract In Spain Has NBA Out

When J.J. Barea signed with Estudiantes in Spain this week, a report at the time indicated that he hadn’t given up on the possibility of playing in the NBA later this year. The terms of his new deal will allow for that possibility, according to ESPN’s Tim MacMahon, who tweets that Barea’s contract includes an NBA out.

The exact terms of the opt-out haven’t been specified. As such, it’s not clear whether Barea will be able to return stateside for an NBA opportunity at any time in the coming months or if there’s a specific window during which he’d be able to exercise that out. Either way, Spain’s Liga ACB is scheduled to end its regular season a little before the NBA does, so Barea should be able to return for the postseason if he receives a contract offer.

MacMahon notes that Barea “remains determined” to play in the NBA this season and will look to use his time in Spain’s top basketball league as a showcase against strong competition.

Given how significantly NBA depth charts have already been shaken up by injuries and COVID-19 in the first five weeks of the season, it seems likely that there will be teams in need of point guard depth who give Barea a look by the spring.