The Bucks have waived forward Johnny O’Bryant, the team announced today (via Twitter). Milwaukee now has 19 players on its preseason roster.

O’Bryant, 28, was selected 36th overall by Milwaukee in the 2014 draft and spent the first two seasons of his professional career with the Bucks. He later spent time with Denver and Charlotte, ultimately appearing in 147 NBA regular season games, averaging 3.5 PPG and 2.4 RPG in 11.5 minutes per contest.

O’Bryant has been out of the league since 2018, having spent the last several seasons playing for teams in Europe. He won an Israeli League championship with Maccabi Tel Aviv in 2019 and a Serbian Cup title with Crvena Zvezda in 2021. He also spent time with clubs in Russia and Turkey.

An earlier report stated that O’Bryant was competing for a spot on Milwaukee’s regular season roster. It appears that effort was unsuccessful, so it’s not clear what his next move will be. His deal with the team included Exhibit 10 language, so joining the Wisconsin Herd in the G League is one possible option — returning overseas is another.

11:29am: The Bucks are adding another player to their preseason roster, according to Shams Charania of The Athletic, who reports (via Twitter) that big man Johnny O’Bryant is rejoining the team on a training camp contract. He worked out for the club earlier in the offseason.

O’Bryant, 28, was selected 36th overall by Milwaukee in the 2014 draft and spent the first two seasons of his professional career with the Bucks. He later spent time with Denver and Charlotte, ultimately appearing in 147 NBA regular season games, averaging 3.5 PPG and 2.4 RPG in 11.5 minutes per contest.

O’Bryant has been out of the league since 2018, having spent the last several seasons playing for teams in Europe. He won an Israeli League championship with Maccabi Tel Aviv in 2019 and a Serbian Cup title with Crvena Zvezda in 2021. He also spent time with clubs in Russia and Turkey.

O’Bryant will get the opportunity to compete for a roster spot in Milwaukee, according to Charania. The team currently has 13 players on fully guaranteed contracts, so there could be a path to a spot on the regular season squad for the veteran. However, rookie Georgios Kalaitzakis has a partial guarantee, which probably gives him a leg up to be the 14th man, and the Bucks may not carry a 15th player at the start of the season due to tax concerns.

Blake Griffin admits being upset over internet rumors that he wasn’t giving 100% during his time with the Pistons last season, writes Andrew Hammond of The Detroit Free Press. Griffin, who joined the Nets after agreeing to a buyout with Detroit in February, addressed that topic during an appearance on J.J. Redick‘s podcast, “The Old Man and the Three.”

“It bothered me,” Griffin said. “Because the stat was, he hadn’t dunked in 400-something days … sure.”

Griffin pointed out that the number is misleading because the Pistons weren’t part of the NBA’s restart in Orlando in the summer of 2020 and he only played 20 more games for Detroit before the buyout. He laughed off the criticism, but Hammond believes he was irritated by the narrative that formed.

Six executives around the league recalled the worst interview answers they’ve received from draft prospects in a story with Michael Scotto of HoopsHype, also examining responses to character questions and insane comparisons from players.

“It’s just amazing how these guys don’t realize this is a job interview, and this isn’t a recruiting process,” one longtime executive said. “You’re not coming in here, and we’re going to tell you how good you are. That’s what trips a lot of them up.”

As Scotto examines, one executive asked a prospect during an interview if he did drugs. The player gave a surprisingly honest response to the question.

“He said he did ecstasy,” the executive said. “We asked him where he got the money for the drugs. He said, ‘They paid me to come to this school, so that’s where I got the money.’ Needless to say, he was red-flagged from our list.”

Teams naturally expect a level of honesty from prospects during pre-draft interviews. Unfortunately, some players have missed the mark on just how honest and descriptive their answers should be.

Former high school basketball prodigy and NBA veteran Sebastian Telfair was sentenced on Monday to three and a half years in prison in his New York City gun case, per The Associated Press. Telfair, 34, was convicted earlier this year of carrying a loaded handgun in his pickup truck.

This was not Telfair’s first brush with the law nor his first incident involving a loaded weapon. He and a friend were arrested in 2007 after a traffic stop during which police found a loaded handgun in the vehicle. He pleaded guilty to criminal possession of a weapon and was sentenced to three years’ probation.

While he never lived up to the hype from his prep career, Telfair did have a relatively successful NBA career. He played 564 games over 10 seasons and averaged 7.4 PPG and 3.5 APG.

There’s more NBA-related news to pass along this evening:

Johnny O’Bryant To Play In Israel

Former Bucks, Nuggets, and Hornets forward Johnny O’Bryant will continue his playing career overseas. According to an announcement from the team (hat tip to Sportando), O’Bryant has signed a one-year contract to join Israeli club Maccabi Tel Aviv.

“Johnny is a great addition for our team” Maccabi head coach Neven Spahija said in a statement. “He has experience in the NBA and he will a key role in the roster. I hope that together with him we’ll make another jump this season. He’s a hard worker and a great man.”

O’Bryant, a second-round pick in the 2014 NBA draft, spent two seasons with the Bucks before being waived. After a training-camp stint with the Wizards in 2016, the former LSU standout signed multiple 10-day contracts with the Nuggets and Hornets in 2017, eventually landing a multiyear deal with Charlotte.

The 6’9″ forward averaged 4.8 PPG and 2.6 RPG in 36 games (10.5 MPG) for the Hornets last season before he was included in the deadline deal that sent Knicks big man Willy Hernangomez to Charlotte. Having been acquired by New York in the trade, O’Bryant was subsequently waived.

This will be O’Bryant’s first stint overseas.

Former Lakers and Hawks forward Ryan Kelly has signed a contract to play for SunRockeres Shibuya of Japan next season, according to a Sportando report. Kelly spent last season with Real Betis in Spain and averaged 13.3 PPG and 4.5 RPG.

In other basketball news domestically and overseas:

FEBRUARY 8: The Knicks have officially waived O’Bryant, the team announced today (via Twitter).

FEBRUARY 7: The Knicks don’t intend to keep the player they acquired from the Hornets in the Willy Hernangomez trade, according to GM Scott Perry, who told reporters today that forward Johnny O’Bryant will be waived (Twitter link via Adam Zagoria of SNY.tv).

O’Bryant, 24, appeared in 36 games for Charlotte this season, averaging 4.8 PPG and 2.6 RPG in 10.5 minutes per contest. Before joining the Hornets as a free agent last March, the former LSU standout had also spent time with the Bucks and Nuggets over the course of his four-year NBA career.

Although Hernangomez has a modest $1.4MM cap hit, he’s earning more than the minimum, so the Hornets couldn’t have used the minimum salary exception to acquire him. With no cap space or trade exceptions available, Charlotte had to send out O’Bryant for salary-matching purposes. The Hornets will be ineligible to re-sign the young forward if and when he clears waivers.

As for the Knicks, the decision to cut O’Bryant signals that the Hernangomez was all about landing those two future second-round picks. New York will keep O’Bryant’s $1.52MM cap hit on the books, assuming he goes unclaimed on waivers, and will open up a spot on their 15-man roster once the transaction becomes official.

The Hornets are committed to a core that hasn’t been able to get the franchise over the hump and likely won’t be able to do so as key components of the rotation age out of their primes.

Much of the organization’s most recent woes can be attributed to injuries and health-related struggles but week-by-week that plucky, purple-shirt-guy-inspired squad that pushed the Heat to seven games in the first-round of the 2016 postseason seems like a distant memory.

Making matters worse for Hornets fans is that there isn’t exactly help in sight. The club projects to break camp close to $20MM over the salary cap and the contracts set to come off their books don’t represent much relief. 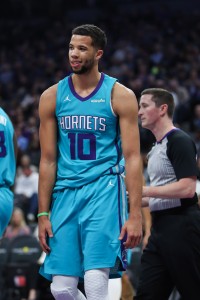 Michael Carter-Williams, PG, 26 (Down) – Signed to a one-year, $2.7MM deal in 2017
Desperate for a reliable backup point guard, the Hornets tried their luck on a former Rookie of the Year. Still just 26 years old, Carter-Williams was an intriguing option to be had for the minimum but bringing him back after a (thus far) career-worst shooting year is a different story. In theory Carter-Williams can fill the stat sheet if given an opportunity, but it’s hard to imagine he’s moved the needle enough at this point in the season to convince the front office to bring him back.

Johnny O’Bryant, PF, 24 (Up) – Signed to a two-year, $1.7MM deal in 2017
The Hornets, in need of healthy bodies to round out their rotation, have plugged O’Bryant into a bigger role of late and the forward has done a respectable job of producing in the time that he’s been given. If Charlotte continues to struggle in 2018, expect the organization to feature their younger players more often. That’s a perfect recipe for O’Bryant to make his case as one of the few in-house growth opportunities the franchise has available.

Wizards point guard John Wall hasn’t taken the court since November 22, having received platelet-rich plasma and viscosupplementation injections in his left knee a few days after that. While Wall’s return isn’t imminent, it’s getting close, according to Candace Buckner of The Washington Post. A source tells Buckner that Wall could get back in the lineup by the middle of next week.

The Wizards’ initial timeline for Wall projected a two-week recovery, which would have put him on track to return this weekend. However, as that same source tells Buckner, the club’s All-Star point guard needs a little more time to get healthy.

Here’s more from around the Southeast division: