Following the Game 6 loss to Dallas that ended their season on Thursday night, the Jazz face an offseason of potential change. Asked after the game about what the future looks like, center Rudy Gobert and guard Jordan Clarkson both expressed a desire to remain in Utah, but acknowledged that decision could be out of their control, per Eric Walden of The Salt Lake Tribune (Twitter links).

While forward Royce O’Neale asserted that “this group wants to stay together,” Gobert expressed uncertainty when he was asked whether the current roster has reached its ceiling (Twitter links via Walden).

“I don’t know,” Gobert said. “We have a lot of talent. This year we faced more adversity. I feel like we could be so much better. … You try to ask yourself why we can’t be consistent.”

As for star guard Donovan Mitchell, he said yes when he was asked after the game whether he wants to stick with the Jazz, writes Andy Larsen of The Salt Lake Tribune. When he was later asked to address speculation about the possibility of him eventually asking for a trade, Mitchell was less equivocal, but gave no indication that such a request is on his mind in the short term.

“My mindset is to win,” he said. “Right now, I’m not really looking at that. I answered (the first) question, and you could take that. But for me, I just want to win, yo. Like, this hurts. And like I said, I’ll think about it in a week and go from there. But right now, I’m not thinking at all about that.”

Domantas Sabonis said he’d like to give his input during the Kings’ coaching search, according to Jason Anderson of the Sacramento Bee. Sacramento opted not to retain Alvin Gentry as the team’s head coach.

“I would like to be part of it and talk to everyone,” Sabonis said. “Give them my input, what I think, what I’ve seen, what could work, what could help.”

Sabonis did not play after March 20 due to a knee injury he termed “a severe bone bruise,” James Ham of ESPN 1320 tweets. Sabonis says he has fully recovered from the injury.

We have more on the Kings:

Nuggets forward Aaron Gordon has been an excellent fit in Denver over the last year, writes Matt Isa of Basketball News. The 6’8″ power forward, 26, is thriving during his first full season with the Nuggets after arriving from Orlando in a deadline trade during the 2020/21 season. Across 62 contests with the Nuggets, Gordon is averaging 14.5 PPG, 5.7 RPG and 2.5 APG. He is also connecting on 51% of his field goal attempts and 73.7% of his free-throw looks.

At 40-28, the ailing Nuggets presently occupy the sixth seed in the East, 1.5 games ahead of the seventh-seeded Timberwolves. Though Gordon never emerged as a bona fide star in Orlando, due in part to a lack of three-point shooting or ball-handling, he has found a home as a key role player for Denver. Gordon has been unlocked as a finisher alongside All-NBA center Nikola Jokic in the team’s frontcourt, opines Isa.

Following his return to the Jazz from a left calf strain, All-Star center Rudy Gobert suggested that the mood around the team seems improved, according to Jazz.com. Prior to Utah’s dominant 135-101 Rockets win on Monday, Gobert had missed the team’s previous nine games.

“Our energy is different,” Gobert said. “I feel like something happened within our team. … That slump really sparked something. I feel like we’re a team that’s trying to accomplish something.”

The Jazz have won six straight games since losing 11 of 13 in January, and appear to be focused collectively on improving their hustle and defensive intensity. Their offensive efficiency has also improved of late.

Mike Conley is listed as questionable for Saturday’s Game 3 of the Jazz’s second-round series against the Clippers, Tony Jones of The Athletic tweets. Conley suffered a right hamstring strain in the series finale against the Grizzlies on June 2nd. The Jazz have used a three-guard rotation of Donovan Mitchell, Joe Ingles and Jordan Clarkson in his absence while winning the first two games of the series.

When Ricky Rubio was acquired by the Timberwolves during the 2020 offseason, it was billed as a homecoming for a veteran point guard who began his NBA career in Minnesota. However, speaking to Jon Krawczynski of The Athletic, Rubio admitted that the unusual circumstances surrounding the 2020/21 season prevented him from really reconnecting with Wolves fans.

“It didn’t feel like I came back to Minnesota,” Rubio said. “That’s one of the things that hurts the most, being at Target Center and not being able to see real fans and feel the love they have had for me. It’s something that I missed.”

While Rubio should get the opportunity to be around fans in Minnesota next season, he’s entering a contract year and could be a candidate to be traded again this offseason if the Wolves want to shake up their roster. For his part, the Spaniard told Krawczynski that he’d love to remain with the team — as long as it keeps taking positive steps toward contention.

“I don’t want to be on a team where there is no direction, there is no hope we can really take the next step,” he said. “I believe we can take the next step and really be a solid playoff team. That’s why when I got traded to Minnesota I was excited. I thought this was the year. We wasted a year, but there is no more years to waste. If not, the rebuilding process is gonna start over again and I don’t think that’s a fun part to be a part of.”

Jazz guard Jordan Clarkson has won the NBA’s Sixth Man of the Year award, according to a league press release. 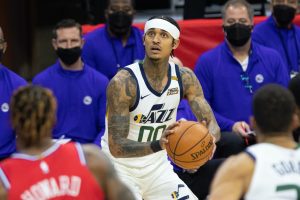 This is the first time Clarkson has won the award. He’s also the first Jazz player to be given the honor.

During a TNT broadcast ahead of tonight’s Wizards-Pacers play-in matchup, the finalists for six big end-of-season 2020/21 awards were announced. Here is the full list, as voted on by reporters.

NBA Defensive Player of the Year:

NBA Rookie of the Year:

NBA Sixth Man of the Year:

NBA Coach of the Year:

Some of these current contenders are familiar with the hardware they’re up for again. Curry is a two-time MVP, having won the award previously in 2015 and 2016. Gobert and Green have both previously won Defensive Player of the Year awards — Green in 2017 and Gobert in 2018 and 2019. Thibodeau was voted Coach of the Year a decade ago while with the Bulls.

The winners for the awards will be announced during the 2020/21 NBA playoffs.

Asked this week during an appearance on The Star Tribune’s Daily Delivery podcast about the trade that sent Andrew Wiggins and a lightly-protected first-round pick to Golden State in exchange for D’Angelo Russell at the 2020 trade deadline, Timberwolves president of basketball operations Gersson Rosas expressed no regrets, writes Michael Rand of The Star Tribune.

Even if Rosas – with the Timberwolves in position to give up a possible top-five pick to the Warriors – was having second thoughts about the trade, it’s not as if he’d be inclined to admit as much during a podcast appearance. But Rand said he felt as if the Wolves’ president was being honest and forthright in his assessment of the deal.

“As of now, I think our resurgence has happened with D’Angelo’s return, so that’s paying dividends now,” Rosas said. “We put the protection in the pick that we felt like was critical to keeping the pick. At some point you’re going to give the pick up whether it’s this year or next year. We’re firm believers. We did it for a purpose. We’re seeing the return on that deal now.”

Trail Blazers star Damian Lillard, who recently missed three games due to right hamstring tendiopathy, hasn’t looked like his usual self in the three games since his return, all Portland losses, writes Jason Quick of The Athletic. Lillard has made just 25-of-72 shot attempts in those games, good for 34.7% from the floor.

As Quick details, Lillard said on Sunday that this is the “worst year physically” he has had in his nine-year playing career, but the All-Star guard said he doesn’t intend to sit out any more games as the Trail Blazers fight for a favorable playoff position. They’ve slipped to seventh, one game back of the sixth-seeded Mavs.

While the Blazers want to avoid being relegated to in a play-in tournament to secure their postseason berth – like they were a year ago – Quick wonders if it might make sense to rest Lillard for a few games before the season ends to make sure he’s in top form. As Quick observes, Portland is 3-2 this season without its leading scorer and has the backcourt depth to get by without him for a few games if a break would benefit Lillard.