Raptors’ Anunoby Expected To Miss At Least One Week

After missing Sunday’s game in Orlando due to left hip soreness, Raptors forward OG Anunoby is expected to remain on the shelf for another week before being reevaluated, tweets Eric Koreen of The Athletic.

According to Koreen, imaging on Anunoby’s hip injury didn’t show anything “troubling,” so it sounds like it shouldn’t be a long-term problem. Still, the timing isn’t great for the injury-plagued Raptors, who are already missing two other rotation players in their frontcourt.

Veteran forward Otto Porter Jr., who is dealing with a dislocated toe, visited with a specialist and it was determined that surgery isn’t necessary at this point, per Josh Lewenberg of TSN.ca (Twitter link). However, head coach Nick Nurse expects Porter to be sidelined for another month, Lewenberg adds.

Meanwhile, forward/center Precious Achiuwa has done some light on-court work in practice as he recovers from an ankle injury and is said to be making progress. But Toronto still doesn’t anticipate having him back in action until sometime in January, tweets Lewenberg.

On the plus side, after missing the last four games due to a right ankle sprain, Raptors forward Juancho Hernangomez practiced on Tuesday and should be activated for Wednesday’s game vs. Sacramento, tweets Michael Grange of Sportsnet.ca. With Anunoby, Porter, and Achiuwa all unavailable, Hernangomez figures to reclaim a spot in the club’s regular rotation.

Raptors big man Precious Achiuwa has been sidelined since November 9 after sustaining partial ligament tears in his right ankle and will remain on the shelf for the foreseeable future. Head coach Nick Nurse told reporters on Monday that it will be another two or three weeks before the team even has a clearer sense of a timeline for Achiuwa’s return, tweets Josh Lewenberg of TSN.ca.

One silver lining of Achiuwa’s injury is that it has given two other Raptors bigs an opportunity to prove their mettle as regular contributors.

Veteran forward/center Thaddeus Young has averaged 10.1 PPG, 6.4 RPG, 3.1 APG, and 1.6 SPG in eight games (26.7 MPG) since Achiuwa went down, while forward Juancho Hernangomez has averaged 6.6 PPG and 6.5 RPG in the same eight games (24.2 MPG). Neither player was a rotation mainstay during the early part of the season.

Raptors guard Fred VanVleet has the ability to become an unrestricted free agent next summer if he turns down his player option for the 2023/24 season. At Monday’s Media Day, he and team president of basketball operations Masai Ujiri were noncommittal about whether a contract extension will get done in the coming weeks, but both sides expressed enthusiasm about continuing the relationship, as Josh Lewenberg of TSN.ca relays (Twitter links).

“I’ll just say I love being a Raptor,” VanVleet said. “… There’s nothing I could ever complain about being on this team. You guys will know when it’s time to know, but I’m happy with where I am and I think it’s a mutual love.”

Ujiri stated that the team is in a “good place” with VanVleet after some initial extension conversations.

Here are a few more notes out of Toronto:

Matisse Thybulle‘s rookie season ended amid the COVID-19 pandemic and last offseason was dedicated to the Olympics, so this is the first summer he’s been able to fully focus on improving his skills, writes Keith Pompey of The Philadelphia Inquirer. The Sixers guard took advantage of the opportunity, spending time training with Damian Lillard and DeMar DeRozan, and he’s eager to show off the improvements he has made.

“It’s just a different feeling you feel when you can see how much more of yourself when you are giving to your craft,” he said, “and to the team and surrendering to the work and living to whatever the outcome can be.”

Thybulle was a lightning rod for criticism last year because of his limitations on offense and his refusal to get vaccinated, which left him unable to participate in playoff games in Toronto during the team’s first-round series. He was reportedly included in trade offers this summer as the Sixers tried to acquire Eric Gordon from the Rockets, but he’s come to accept that as part of life in the NBA.

“At this point, I would always want to stay in Philly,” he said. “And if it’s up to me, that’s always going to be my choice. But considering that I’ve realized the reality of how far out of my control it is, if I do get traded or something does end up happening, I can look at myself in the mirror at the end of the day.”

Victor Wembanyama is projected to be the top pick in the 2023 draft, but he’s more concerned about landing with the right team than being taken No. 1 overall, writes Antonis Stroggylakis of Eurohoops. Wembanyama, who plays for Metropolitans 92 in France, discussed his prospects during Media Day for his team’s new season, which starts this weekend.

“Sports-wise, the most interesting thing is always to find an organization that will take care of the project and the player,” Wembanyama said, as reported by the French outlet BasketSession. “So it’s better to be second, third, or 20th in the Draft if you have a better career afterward. But I don’t know if it’s pride, I have a part in me that says that there must be no one (drafted) in front of me.”

The 18-year-old center stands 7’4″, but he only weighs a little over 200 pounds, so durability is one of the few questions surrounding him as he prepares for his NBA career. Scouts are nearly unanimous in raving about his talent, and he has been a star in international competitions for the past three years.

“What matters to me this season is above all to consolidate a place as a possible No. 1 pick in the draft,” Wembanyama added. “That’s my goal, rather than trying to put on 15 kilos and take risks. I want to strengthen myself, but above all to move towards a favorable situation for the NBA.”

Here are more odds and ends from around the basketball globe:

After defeating France 88-76 in the championship game, Spain has officially won EuroBasket 2022, as announced on social media (Twitter link). This is the fourth time Spain has won the tournament.

Spain was led by Raptors forward Juancho Hernangomez, who finished with 27 points on 9-of-11 shooting. His seven three-pointers were the second-highest mark in a EuroBasket final, trailing only Aleksander Djordjevic in 1995, according to EuroHoops. He also won the game’s MVP award.

“Spain played better from start to finish, they had a clear gameplan and we didn’t execute ours well enough, we never really had control of the game,” France guard Evan Fournier said, per EuroHoops.

Hernangomez’s brother, Willy Hernangomez, finished with 14 points and eight rebounds for Spain, while Lorenzo Brown recorded 14 points and 11 assists. France was led by Fournier’s 23 points and only led once during the contest — when Rudy Gobert made a free throw to make it 1-0.

Juancho Hernangomez‘s one-year contract with the Raptors is fully guaranteed, Hoops Rumors has learned. That full guarantee should put the veteran forward in a good position to earn a spot on the team’s 15-man regular season roster. Hernangomez’s deal is worth the veteran’s minimum, so he’ll earn a $2,298,385 salary while Toronto takes on a cap hit of $1,836,090.

Here are a few more notes on new contracts from around the NBA:

JULY 28: The Raptors have officially signed Hernangomez, the team announced today in a press release. 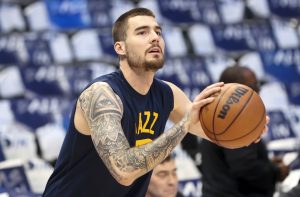 JULY 26: Free agent forward Juancho Hernangomez is finalizing a one-year agreement with the Raptors, according to ESPN’s Adrian Wojnarowski (via Twitter).

Hernangomez has been on the open market since being waived by the Jazz on June 30. Utah released him before his $7.3MM salary for the 2022/23 season became guaranteed. While terms of the veteran’s new deal with Toronto aren’t yet known, it’s a safe bet it’ll be worth less than that — I’d expect a minimum-salary contract.

Hernangomez, 26, has flashed the ability to contribute as a stretch four over the course of his six NBA seasons, but didn’t stay in one place for long during the 2021/22 league year. He was traded from Minnesota to Memphis last August, then to Boston in September, to San Antonio in January, and to Utah in February.

The Raptors currently have 18 players under contract, with second-rounder Christian Koloko and Hernangomez likely to fill out the team’s 20-man offseason roster.

It’s possible that Hernangomez – like D.J. Wilson, Dalano Banton, Armoni Brooks, and Justin Champagnie – will get a partially guaranteed contract and will have to earn for a spot on the 15-man regular season roster.