Naz Reid‘s role entering 2022/23 was uncertain, but the fourth-year center has once again proven to be a valuable bench piece for the Timberwolves. The 23-year-old is set to hit unrestricted free agency this summer, and at least three teams — the Clippers, Nuggets and Nets — have reportedly inquired about him on the trade market.

Head coach Chris Finch says Reid’s game has drawn praise around the NBA, according to Chris Hine of The Star Tribune.

“He’s got a lot of skill offensively. Underrated rim protector with his shot blocking,” Finch said. “He’s a heck of a story, having been an undrafted guy, remade his body, developed confidence, excellent system fit. Really a modern center now, a modern big.

“As for the specifics or any of the chatter, I don’t know, but I can tell you he has won a lot of fans around the league and a lot of other coaches and people I’ve talked to really like him.”

Reid says he’s focused on basketball and hasn’t been bothered by the trade rumors, Hine adds.

“Whatever happens is going to happen for the better,” Reid said. “I just try to play basketball, focus my mind on basketball and not so much what’s going on outside of basketball. I mean, hopefully everything goes full circle and comes the right way.”

The Timberwolves’ acquisition of Rudy Gobert could eventually go down as the most lopsided trade in NBA history with the Jazz as the beneficiary, Andy Larsen of Salt Lake Tribune opines.

Jazz rookie center Walker Kessler has played as well or better than Gobert has this season, in Larsen’s view. Utah also received Jarred Vanderbilt and Malik Beasley, who could potentially be flipped for first-round picks, plus the Timberwolves’ first-rounder this year as well as first-rounders in 2025, 2027 and 2029 and a pick swap in 2026.

After discussing several possible Cavaliers trade targets on Jake Fischer’s podcast last week, Chris Fedor of Cleveland.com expanded on the club’s hunt for a wing in a subscriber-only story on Tuesday, taking a closer look at why Mavericks swingman Tim Hardaway Jr. appeals to Cleveland, why the club is reluctant to part with former lottery pick Isaac Okoro, and much more.

Here are a few highlights from Fedor’s story:

The Timberwolves need much more from center Rudy Gobert, who hasn’t been the player they thought they were trading for, according Jon Krawczynski of The Athletic.

As Krawczynski writes, the Wolves lost a winnable game on Monday when Miami was down its two best players in forward Jimmy Butler and center Bam Adebayo. Gobert was outplayed by undrafted two-way Heat rookie Orlando Robinson, which is inexcusable for a player of his stature.

Gobert’s numbers are down across the board, and he doesn’t appear to be as mobile or changing shots at the rim like he did while winning three Defensive Player of the Year awards with the Jazz. Krawczynski points out that perhaps the most concerning statistic is that Gobert’s blocked shots have plummeted down to 1.2 per game — the lowest since his rookie year in 2023/14, when he averaged fewer than 10 minutes per contest.

There’s still time to turn things around, and injuries to key rotation players haven’t helped. But to this point, the blockbuster trade is looking like a disaster for the Wolves, per Krawczynski.

For what it’s worth, Krawczynski said (via Twitter) that Gobert played “great” in Wednesday’s one-point loss to the Pelicans, which dropped the Wolves’ record to 16-19.

With Karl-Anthony Towns and Rudy Gobert unavailable on Friday night, Timberwolves center Naz Reid got his first start of the season in Oklahoma City and delivered in a big way. The big man’s 28 points were easily a season high, and he also chipped in nine rebounds, three assists, and three steals. The Wolves outscored the Thunder by 21 points with Reid on the floor in a game they won by just two points.

The performance was a reminder of why the Wolves have been trying to lock up Reid to a contract extension for several months, according to Darren Wolfson of 5 Eyewitness News (Twitter links), who says the 23-year-old’s best play might be to wait for unrestricted free agency.

As we noted when news of Reid’s extension negotiations with the team first broke, Minnesota could offer up to about $58MM over four years, and I’m skeptical he’ll do better than that as a free agent. But perhaps it makes sense for him to see what else is available on the open market, especially if the Wolves’ offers have been modest.

Although Reid is in a contract year, Wolfson doesn’t expect Minnesota to seriously consider trading him before the February deadline, arguing that it would be hard to get fair value for him and noting that the Wolves still have “lofty” goals for this season that Reid can help them achieve (Twitter links).

Jaren Jackson Jr. is close to making his season debut for the Grizzlies, according to Damichael Cole of the Memphis Commercial Appeal.

Jackson was listed as doubtful to play against Washington on Sunday, then was declared out. He was listed as out for all previous games this season as he rehabbed from foot surgery. Jackson recently started playing in 5-on-5 situations during practice.

With Karl-Anthony Towns sidelined for the start of the Timberwolves‘ training camp due to a non-COVID illness, center Rudy Gobert didn’t get a chance to work with his new frontcourt partner in his first formal practice with the team on Tuesday. But Gobert said he felt “great” energy on Tuesday and spoke specifically about developing chemistry with new pick-and-roll partner D’Angelo Russell.

“He can see it all,” Gobert said of Russell, according to Chris Hine of The Star Tribune. “There’s a few times when I didn’t know that he saw me, and he still saw me. It’s really impressive and it’s really exciting.”

As for his partnership with Towns, Gobert said the two big men have been in contact since he was traded to Minnesota in July and have talked about how they’ll be able to maximize each other’s talent.

“On both ends on the floor and even off the floor, just be a great friend, be a great support for him and then on the court, just let that relationship carry over,” Gobert said. “Help him be the best Karl he can be and I know, just by being himself, he’s going to help me be the best Rudy I can be.”

After a competitive playoff performance and a major offseason trade that brought in Rudy Gobert, the Timberwolves appear to be legitimate contenders in the Western Conference. Minnesota won 46 games and reached the postseason for the first time in four years, but coach Chris Finch plans to emphasize to his team that the next step won’t come easily, writes Jon Krawczynski of The Athletic.

Minnesota sent five players and a hefty package of draft assets to Utah to acquire Gobert, but the front office views him as a difference maker and doesn’t believe it overpaid, Krawczynski adds. Now it’s up to Finch and the rest of the coaching staff to figure out the best way to use Gobert alongside fellow big man Karl-Anthony Towns.

“I’m trying not to overthink that right now,” Finch said. “I don’t want to solve a problem before we have a problem. But we have to have some ideas ready to go.”

Booker’s deal includes a 10% trade kicker, but is fully guaranteed for all four years, with no player option in 2027/28.

Towns’ new contract, conversely, doesn’t feature a trade kicker, but has a fourth-year player option, giving Towns the ability to opt out and reach free agency in 2027.

Here are several more contract details from around the NBA:

JULY 8: The Timberwolves have officially signed Anderson, according to the transactions log at NBA.com. 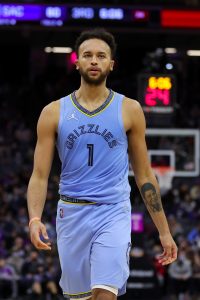 The terms of the contract suggest Minnesota will be using part of its non-taxpayer mid-level exception to sign Anderson. Both years will be guaranteed, tweets Darren Wolfson of 5 Eyewitness News.

After enjoying a career year in 2020/21 with 12.4 PPG and a .360 3PT%, Anderson failed to match those numbers in ’21/22, but he remains a solid defensive wing who rebounds well for his size and can act as a secondary play-maker.

According to Dane Moore of Bring Me The News (Twitter link), the Wolves “really wanted” to add a player who could create his own shot and put pressure on the rim. They believe Anderson fits that bill.