Landry Shamet (right Achilles soreness) will miss a third consecutive game on Friday when the Suns visit Toronto, but it sounds like he’s closer to returning than some of his injured teammates. Shamet is aiming to make it back before Phoenix’s road trip wraps up on Wednesday, writes Duane Rankin of The Arizona Republic.

“Whenever they give me the green light,” Shamet said. “… There’s a reason they get paid to do what they do, the training staff. … I feel good to go right now, but I trust them to let me know when I’m ready to go.”

The Suns are also missing Devin Booker (groin strain), Cameron Johnson (meniscus tear), Cameron Payne (foot strain), and Jae Crowder (not with team), so getting Shamet back would give the rotation a lift.

Zion Williamson‘s continued evolution into a superstar and his health are foremost among the factors that will determine the Pelicans‘ long-term ceiling, but the Collective Bargaining Agreement negotiations currently taking place between the NBA and the players’ union will also have a major impact on the team’s future, according to Brian Windhorst of ESPN.

As Windhorst writes, New Orleans’ roster – one of the NBA’s deepest – is starting to get more expensive and the club is one of two NBA franchises never to have paid the luxury tax, so any major changes to the tax system, including the possible implementation of an “upper spending limit,” would be of particular interest to the Pelicans.

Nuggets forward Michael Porter Jr. (left heel contusion) will miss his fourth consecutive game on Wednesday, but Denver will get some reinforcements vs. Houston with Bones Hyland (non-COVID illness) set to make his return following a three-game absence, per Harrison Wind or DNVR Sports (Twitter links).

Hyland last played on November 22 and was hampered by his illness on that night, logging just nine minutes. The Nuggets guard said today that he “couldn’t breathe on the floor” during that game, but is “feeling great” now, according to Mike Singer of The Denver Post.

CJ McCollum has entered the NBA’s health and safety protocols and is out for Friday’s game against the Grizzlies, tweets Shams Charania of The Athletic.

With McCollum sidelined in Wednesday’s victory over the Spurs, second-year guard Jose Alvarado started in his place, with Devonte’ Graham and Dyson Daniels receiving more playing time off the bench. That should continue until McCollum is cleared to return.

Here’s more from the Southwest Division:

Pelicans guard Kira Lewis, who is making his way back from a torn ACL that sidelined him for much of last season and the start of this season, is inching closer to a return, having progressed to full five-on-five work, tweets ESPN’s Andrew Lopez.

While five-on-five scrimmages are generally one of the final steps in a player’s rehab process before he returns to action, Lewis may need some time to get back up to game speed and improve his conditioning after being sidelined for nearly a full year. According to Lopez, the next step for the former first-round pick is to spend some time with the Birmingham Squadron, New Orleans’ G League affiliate.

Pelicans forward Larry Nance Jr. appears to have avoided a major injury after leaving Monday’s loss to Indiana in the third quarter due to a knee problem. As Andrew Lopez of ESPN writes, Nance’s left knee hyperextended while he was attempting to grab a rebound and there was some initial fear that he had torn a ligament. However, further testing seemed to indicate there’s no significant damage.

“It’s just one of those things that you do, and as someone who has torn their ACL before (while in college at Wyoming), it’s scary. It hurts. I just wanted to make sure I got it checked out. It’s sore, but we’ve avoided anything big-time.”

Nance is considered day-to-day and hasn’t been ruled out for the Pelicans’ game on Wednesday in Chicago.

“We’re going to ice it, do some treatment,” he said after Monday’s game. “And tonight, we told (head coach) Willie (Green) that if he needed me I was available to go back in. We’re gonna do some treatment and see how it responds tomorrow. But positive news.”

Here are some details on a few more new contracts from around the NBA:

OCTOBER 3: Nance has officially signed the extension, according to a team press release. 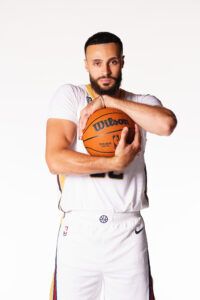 OCTOBER 1: The Pelicans and forward Larry Nance Jr. have reached an agreement on a two-year, $21.6MM extension, Adrian Wojnarowski of ESPN tweets.

There are no team or player options included in the new extension, Will Guillory of The Athletic tweets.

Nance, 29, has bounced around the league a little bit but has always been coveted for his versatility. He launched his career with the Lakers and played three-and-a-half seasons with Cleveland. He began last season on Portland’s roster but was part of the blockbuster deal that brought CJ McCollum to New Orleans.

He projects as Zion Williamson‘s backup this season and now, apparently, for the next two seasons as well.

Rockets point guard Kevin Porter Jr. appears to have earned a long-term look with the franchise. Houston and Porter have had initial discussions about the future of the extension-eligible 22-year-old, prompting Kelly Iko and Danny Leroux of The Athletic take a deep dive into what a new deal might look like for the fourth-year guard.

Leroux projects an annual number in the range of $10-15MM for Porter. Should the Rockets opt to not extend Porter and instead let him reach restricted free agency in the summer of 2023, Leroux notes that the market for the 6’4″ guard’s services could be dampened. Currently, just seven NBA clubs, including the Rockets, project to have cap space available to sign Porter for more than the mid-level exception.

It sounds like the Pelicans might be interested in extending the contracts of a couple of mid-season additions. Speaking on his latest Hoop Collective podcast (hat tip to RealGM), ESPN’s Brian Windhorst said he’s heard that New Orleans is interested in coming to agreements with CJ McCollum and Larry Nance Jr., who were both acquired from Portland in February prior to the trade deadline.

“I believe it is next month when they can start talking about that,” said ESPN’s Andrew Lopez. “I know it’s before the season…”

“Maybe they haven’t ‘talked’, but I heard they ‘talked’, don’t tell anybody,” Windhorst replied in a hushed voice.

“I think the Pelicans are also interested in extending Larry Nance’s contract,” Windhorst added. “We’ll see if that gets done.”

McCollum, who turns 31 in September, is under contract for the next two seasons at a combined $69.13MM, while Nance, who turns 30 in January, has one year left on his deal at $9.67MM.