Former NBA forward Mario Hezonja has no interest in returning to the league, Johnny Askounis of Eurohoops.net relays. Speaking to Russia’s Tatar-inform, Hezonja said, “I didn’t get the respect I deserved. Also, in my opinion, the NBA is more a show than the game itself.”

Hezonja, who is playing for UNICS Kazan this season, spent five seasons in the NBA, most recently on a 53-game stint with Portland in 2019/20.

Heat sharpshooter Duncan Robinson has told associates that his preference is to remain with the Heat, a source tells Tim Reynolds of The Associated Press (Twitter link). Robinson is a restricted free agent and Miami wants to retain him, so he wouldn’t have had much leverage if he wanted to go to a new team, but the fact that he wants to return is good news for the Heat. They’ll be able to keep his small cap hold on their books while they address other free agent business before circling back to finalize a new deal with Robinson.

Here are a few more updates related to free agency:

Four qualifying tournaments to determine the final four teams in the men’s basketball pool at the Tokyo Olympics are set to tip off on Tuesday. In advance of the Olympic qualifiers, the 24 teams involved have officially set their 12-man rosters, according to a press release from FIBA.

More than two dozen current NBA players are participating in the tournament, and 11 of the 24 teams competing for Olympic spots have at least one current NBA players on their respective rosters. Of those clubs, Team Canada has the biggest contingent of NBA players — eight of the 12 players on Nick Nurse‘s squad finished the season on an NBA roster. Turkey is next with four NBA players.

The four qualifying tournaments will take place in Serbia, Lithuania, Croatia, and Canada. Only the winner of each six-team group will advance to Tokyo. Those four winners will join Japan, Nigeria, Argentina, Iran, France, Spain, Australia, and the U.S. in the 12-team Olympic tournament.

The teams that move onto the Olympics may tweak their rosters for Tokyo, depending on the availability of certain players. For instance, if Greece were to win its qualifying tournament, perhaps Bucks star Giannis Antetokounmpo – who remains active in the playoffs for now – would make an effort to join the team in Tokyo next month.

Here are the NBA players on the OQT rosters:

To view the full rosters, be sure to visit FIBA’s official site and click through to each team from there.

Team USA’s backcourt has been fortified by two All-Stars who pledged on Friday to play in the Tokyo Olympics.

Wizards All-Star guard Bradley Beal, the league’s second-leading scorer this season, has made a commitment, Shams Charania of The Athletic tweets. Suns shooting guard Devin Booker, who finished 14th in scoring and will be playing in the upcoming Western Conference Finals, has also decided to participate, Adrian Wojnarowski of ESPN tweets.

We have more news regarding the Olympics:

Team USA won two games in convincing fashion over the weekend, defeating the Bahamas and Mexico in the FIBA AmeriCup qualifying tournament, according to an Associated Press story. The team, which advances to the September 2022 tourney, featured familiar names such as Joe Johnson, Brandon Bass and Isaiah Thomas, who was hoping to use the event to boost his chances for an NBA comeback.

Thomas, who hasn’t played competitively since being traded to the Clippers and waived last February, scored 19 points in Friday’s game and nine on Saturday.

“The world knows I’ve got what it takes. So, it’s just about showing that I’m healthy,” he said. “My skill didn’t go anywhere, it was just about getting a hundred percent healthy, which I am right now.”

1:14pm: The Grizzlies have officially waived Hezonja, the team confirmed in a press release. Additionally, Memphis announced that it has signed free agent guard Ahmad Caver to fill the newly-opened roster spot.

Terms of Caver’s deal weren’t disclosed, but it’s likely an Exhibit 10 contract designed to get him a $50K bonus if he plays for the Memphis Hustle in the G League again this season, as he did last year.

The Grizzlies were carrying 17 players with guaranteed contracts into training camp, leaving Hezonja and Marko Guduric as the likely odd men out for the regular season. Neither player was in camp with the club.

Hezonja hasn’t developed into a reliable and productive rotation player since being selected with the fifth overall pick in the 2015 draft, but being cut by the Grizzlies doesn’t necessarily mean he won’t play in the NBA at all this season. According to Charania, multiple teams are expected to express interest in the Croatian once he clears waivers and training camp ends.

Hezonja, Guduric Won’t Be In Camp With Grizzlies

Veteran forward Mario Hezonja and guard Marko Guduric won’t be in training camp with the Grizzlies, tweets Chris Herrington of The Daily Memphian.

Memphis is currently carrying 17 players on guaranteed contracts and must cut that number down to 15 before the regular season begins later this month. Herrington, who previously identified Hezonja and Guduric as the probable odd men out, says this is further confirmation that they’re the favorites to be waived if the Grizzlies don’t make a trade or two to trim the roster in the next couple weeks.

As Herrington notes (via Twitter), assuming the Grizzlies release both Hezonja and Guduric, they won’t have to stretch either player’s guaranteed salary across three seasons in order to stay out of luxury-tax territory. However, the team could still decide to stretch one or both cap hits to create a little extra flexibility below the tax threshold.

The Rockets still expect to begin the season with former MVPs James Harden and Russell Westbrook on their roster, despite a handful of November trade rumors, Shams Charania of The Athletic said during an appearance on Complex’s Load Management podcast.

Although there’s no momentum toward a trade involving either player, Charania dropped a couple interesting tidbits during his podcast discussion about the Rockets stars, mentioning that the Warriors “made a call” about Harden and that the Cavaliers talked to Houston about Westbrook. Based on Charania’s comments, it doesn’t sound like any traction was gained in either case.

10:21pm: The trade is now official, according to press release from the Celtics and Grizzlies. 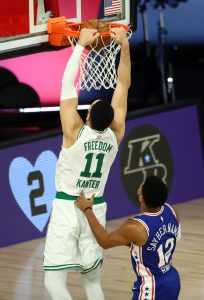 The deal will send Kanter to Portland, Hezonja and the rights to Bane to Memphis, and two future second-round picks to Boston. The Grizzlies will also send cash to Portland in the move.

One of the two second-rounders headed from Memphis to Boston is the Grizzlies’ own 2025 pick. The other will be the more favorable of the following:

2:46pm: The Trail Blazers are reuniting with veteran center Enes Kanter, having reached a deal to acquire him from the Celtics, reports Adrian Wojnarowski of ESPN (Twitter link).

As Wojnarowski explains, the deal will be folded into the draft-night agreement between the Celtics and Grizzlies that saw Memphis land the No. 30 pick and select TCU’s Desmond Bane. The Grizzlies will receive Mario Hezonja from Portland in the swap, while the Celtics will get a future draft consideration from Memphis.

Kanter, 28, enjoyed a brief, productive stint in Portland to finish the 2018/19 season, averaging 11.4 PPG and 9.7 RPG in 16 playoff games that year as the team made it to the Western Conference Finals. The two sides were unable to come to an agreement in free agency a year ago, resulting in Kanter signing with the Celtics. A year later, he’s back with the Blazers.

The move will give Portland a veteran backup for starting center Jusuf Nurkic and is probably a strong signal that free agent big man Hassan Whiteside isn’t coming back.

The Celtics, meanwhile, having already traded away Vincent Poirier this week, have created a little extra cap and roster flexibility in advance of free agency, though they’ll need to add a frontcourt player or two to make up for losing a pair of centers.

Hezonja and Kanter both exercised player options for 2020/21 earlier this week, so they’re on expiring contracts. Hezonja will earn $1.98MM, while Kanter will make just over $5MM. The Grizzlies will take on Hezonja using one of their trade exceptions and Portland will do the same for Kanter.

Trail Blazers swingman Mario Hezonja will pick up his player option, opting in for the 2020/21 season, reports Michael Scotto of HoopsHype (Twitter link). As a result, Hezonja will forgo free agency until 2021 and will lock in a $1,977,011 guaranteed salary with Portland for the upcoming season.

Although he was the fifth overall pick in the 2015 draft, Hezonja has failed to develop into a reliable rotation player in Orlando, New York, or Portland since entering the league. It’s not even a certainty he would have received minimum-salary offers if he had opted for free agency this fall, so his decision to exercise his option comes as no surprise — we’ll see if he sticks with the Blazers or gets included in a trade before the 2021 deadline.

Accounting for Hezonja’s modest salary doesn’t impact the Blazers’ cap outlook in any real way. Portland projects to be an over-the-cap team this offseason.

Rodney Hood, who is coming off an Achilles tear, is the other Blazer who holds a player option for 2020/21. The expectation is that he’ll pick up his $6MM option.