Zion Williamson will be eligible for a rookie scale extension next summer, which makes the next 12 months critical for the Pelicans, writes Christian Clark of NOLA.com. Although he has been hampered by injuries during his first two NBA seasons, Williamson has been brilliant when he’s been on the court, averaging 25.7 points, 7.2 rebounds and 3.7 assists in 85 combined games. He provides a foundation for New Orleans to build around, but the Pelicans will need him to accept a long-term deal.

No player on a rookie scale contract has turned down a maximum-salary extension during the past decade, but Clark notes that Williamson’s circumstances are unusual. He’s already an All-Star at age 20 and he came into the NBA with a reported $75MM deal with Jordan Brand. He may not mind giving up a little bit of money to get to a larger market or a contending team. New Orleans is a combined 61-83 since adding Williamson and has missed the playoffs both years.

“My stepfather taught me different,” Williamson said at his exit interview. “Doing the same thing over and over and expecting a different result is kind of insane. So I’m not going to sit here and say we’re close. The reality of it is it was very disappointing not to be a part of the play-in tournament and stuff. We just have to come in and be better. That’s just me being real.”

MARCH 26: The trade is now official, according to announcement from thes Mavericks (Twitter link) and Pelicans. 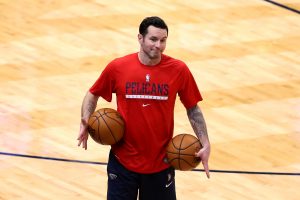 MARCH 25: The Pelicans won’t be trading point guard Lonzo Ball at today’s deadline, according to ESPN’s Adrian Wojnarowski (Twitter link). However, New Orleans has agreed to a deal that will send J.J. Redick to the Mavericks, reports Shams Charania of The Athletic (Twitter link).

The Pelicans will receive James Johnson, Wesley Iwundu, and a 2021 second-round pick in exchange for Redick and Nicolo Melli, a source tells Andrew Lopez of ESPN (Twitter links). New Orleans also received cash from the Mavericks in the deal, tweets Marc Stein of The New York Times.

Charania initially reported that the Redick deal would be a three-team trade that also sent Trey Lyles from the Spurs to Dallas, but has since clarified that it will just be a direct trade between the Pelicans and Mavs.

Redick, who was averaging 8.7 PPG in 31 appearances off the bench, had expressed a desire to be dealt to a team in the Northeast, where his family resides. He’ll have to wait until the offseason to make that happen but he’ll provide the Mavericks with another 3-point threat off the bench. He’ll be an unrestricted free agent.

Melli reportedly wanted out after seeing his playing time decline in his second NBA season. He’s only appeared in 22 games this season. He can be a restricted free agent if Dallas decides to extend a $4.87MM qualifying offer. The Mavs will keep Melli at least through the end of this season, Brad Townsend of the Dallas Morning News tweets.

Johnson has an expiring $16MM contract. He’s averaging 5.7 PPG and 3.0 RPG in 29 games this season and gives the Pelicans another frontcourt option. Iwundu has seen action in 23 games this season but has only averaged 2.1 PPG in 12.5 MPG during those outings. He has another year left on his contract but his 2021/22 salary is just $1.82MM.

As for Ball, the Bulls, Knicks, Clippers, Nuggets and Sixers had all been linked to the former No. 2 pick to varying degrees in recent weeks, but New Orleans didn’t find a package attractive enough to deal its current floor leader.

The Pelicans will have to decide after the season whether to extend Ball a $14.36MM qualifying offer and make him a restricted free agent, or let him enter the market unrestricted. Assuming they extend that QO, as is expected, they’ll then have to weigh how aggressive they’re willing to be when it comes to a long-term contract offer.

Pelicans forward Nicolò Melli has seen his playing time cut in his second NBA season and he may be looking for a way out of New Orleans, according to a report from Sportando. The story first appeared in the Italian publication La Gazzetta dello Sport, which states that Melli is waiting for an opportunity with a new team.

The 30-year-old has gotten into just 21 games this season under new coach Stan Van Gundy and is averaging 2.0 PPG in about 11 minutes per night. As a rookie last year with coach Alvin Gentry, Melli averaged 6.6 PPG and 17.4 minutes of playing time in 60 games.

Melli was a star in the EuroLeague for several years before coming to the NBA. He is making $3.88MM this season and will be eligible for a $4.87MM qualifying offer this summer.

Pelicans big man Jaxson Hayes has regained his rotation spot and he’s determined to hold onto it, Christian Clark of the New Orleans Times-Picayune writes. In his past five games, Hayes is averaging 11.4 PPG, 3.8 RPG and 1.4 BPG in 17.5 MPG. The 2019 lottery pick, who had his third-year rookie-scale option picked up by New Orleans in December, has displaced Willy Hernangomez as the second-unit backup center.

“The main thing I took away was I never want to be in that position again,” Hayes said of his February benching. “It’s not like it was a bad thing. I just always want to be on the court.”

Pelicans general manager Trajan Langdon reportedly informed the Kings on Wednesday that he will not be involved in their search for a new head of basketball operations.

With Langdon pulling his name out of the Kings’ search, that leaves Sachin Gupta, Adam Simon, Calvin Booth, Monte McNair, and Wes Wilcox as potential replacements for Vlade Divac. Jason Jones of The Athletic looks at each candidate’s resume, exploring why they would make sense for Sacramento.

As Jones points out, the Kings head into the offseason with four picks in the 2020 NBA draft, including the 12th overall selection, but do not have a lot of cap space. Therefore, whoever Sacramento chooses will have a tall task ahead of them to break the team’s 14-year playoff drought.

Here’s more from across the Western Conference:

The NBA continues to be in wait-and-see mode with the coronavirus pandemic forcing the league to halt operations. Pelicans VP of basketball operations David Griffin joined the club’s local broadcast team to talk about the suspended season as well as share some insight about the on-court product in New Orleans, as the team relays on its website.

Griffin said he hopes that the league resumes soon but wouldn’t speculate on a definite timeline, as it’s impossible to accurately predict when the virus will be contained.

“With everything changing so quickly, everything is in a state of flux that I think it would be premature for the NBA to say what it ultimately looks like,” Griffin said. “I do know unequivocally that the league is very mindful of the idea of getting back to playing.

“The idea of canceling a season is not all on their minds, and we’re modeling every possible thing we can for how we can deliver a product to the fans. Quite frankly, we’re all going to need a diversion in the future. (But) until we can get to a point where we think we’ve got containment of (the coronavirus), we’re going to continue to stay locked down. Hopefully we’ll get to a point where we can come back sooner rather than later.”

During the 30-minute segment, Griffin also discussed the Pelicans’ roster, including the fit of Zion Williamson and Lonzo Ball.

“A big part of it is the chemistry you see with Lonzo and Zion. They have a special connection,” Griffin said, while adding that Nicolo Melli has also proven to be a good on-court mate to Williamson.

“I think Nicolo Melli getting more minutes, and him starting to become a key part of the rotation has been essential as well,” the executive added. “Those three guys work incredibly well as a unit. Zion gives us another player who can create vertical thrust in the offense, and Lonzo can pick defenses apart with his passing.”

“I think the secret’s out on the Grizzlies at this point,” Kleiman said. “Just watching them night in and night out, these guys really like playing with each other, and from our perspective, that’s great to see.”

All the changes to the Warriors roster will make training camp “critical,” coach Steve Kerr told Anthony Slater of The Athletic. While in recent years the Warriors have only made tweaks to their scheme, this training camp will involve sorting out the rotation and finding the team’s strengths.

“This year, it’s totally different,” Kerr said. “Nobody really knows each other that well. We’re really going to have to examine our team in camp, the exhibition season, early in the season. Figure out the best way to play on both ends.”

Kerr sees the need to take more control of the offense.

“When you lose continuity, it’s more important to have sets and calls that you can rely on,” he said. “Random stuff gets more difficult if you don’t know each other well.”

The Pelicans will look much different this season after trading away Anthony Davis over the summer. However, the vibe in New Orleans appears to be on the upswing with executive vice president of basketball operations David Griffin leading the franchise.

“I feel like the whole vibe, the whole attitude in the facility and with the staff has just been different,” Jrue Holiday said (via Andrew Lopez of ESPN.com). “It definitely feels like people are ready and excited. It’s been like that ever since Griff has come into place.”