The NBA has announced suspensions (via Twitter) for three players involved in an altercation during Friday night’s game between the Magic and Timberwolves.

Orlando center Mohamed Bamba was suspended for four games and Minnesota guard Austin Rivers received three games for their roles in the fight. Magic guard Jalen Suggs received a one-game suspension for escalating the incident, and Wolves forward Jaden McDaniels was fined $20K for running into the fray and pushing Bamba in the back.

All four players were given technical fouls and were ejected from the game. Minnesota’s Taurean Prince was also ejected, but he wasn’t disciplined by the league.

Bamba appeared to start the fight with a comment to Rivers after his missed three-pointer late in the third quarter. Rivers took exception and challenged Bamba on Orlando’s bench. Both players threw punches, although it looked like none of them connected. Suggs tackled Rivers, and McDaniels and Prince also got involved.

The NBA’s press release states that Bamba tried to “continue to engage with Rivers in a hostile manner in the corridor outside the locker rooms where he also aggressively shoved a security representative,” which explains why he got the longest suspension. 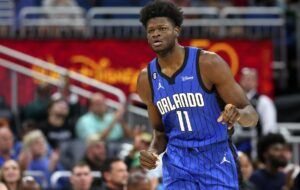 It appears as though Bamba may have initiated the incident by saying something to Rivers after he missed a three-pointer, as Markelle Fultz looked absolutely shocked by whatever was said (Twitter video link via Rob Perez).

Clearly Rivers didn’t appreciate the comment, as he returned to Orlando’s bench (Bamba wasn’t in the game at the time), and then a fight broke out between Bamba and Rivers, with punches thrown, though none appeared to connect (Twitter video link via Bally Sports North).

Suggs then ran into the fray and tackled Rivers, with chaos ensuing. Prince and McDaniels were both shoving and trying to get involved, so apparently they were ejected for escalating the altercation.

According to Pierre Noujaim of Fox 9 Minneapolis (Twitter link), Bamba and Rivers tried to continue the fight in the arena hallway after being ejected, and had to be restrained, presumably by security.

All five players are likely to face suspensions and/or fines, with Bamba and Rivers almost certain to receive the most significant penalties.

Bamba is typically a backup center, but he started the game for the Magic, with Suggs a reserve guard. Losing them to suspensions would affect the team’s rotation, but not as substantially as it would the Wolves, as McDaniels is a starter and Prince and Rivers are two of Minnesota’s primary reserves.

Magic forward Paolo Banchero and Kings forward Keegan Murray have been named the NBA’s rookies of the month, the league announced (via Twitter). It’s the second straight rookie of the month honor for both players. 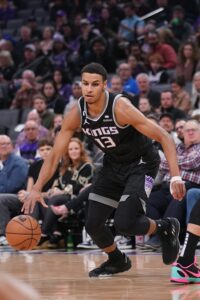 According to the NBA (Twitter link), the other nominees in the West were Tari Eason, Jabari Smith Jr., Walker Kessler, Jeremy Sochan and Williams, while Jaden Ivey and Mathurin were nominated in the East.

The Sixers are hoping to land a reliable backup center before next week’s trade deadline, sources tell Kyle Neubeck of The Philly Voice. Montrezl Harrell and Paul Reed have been filling that role, but Harrell hasn’t been strong defensively and the coaching staff doesn’t fully trust Reed, according to Neubeck.

Neubeck states that the front office is willing to add another big man even if it can’t get rid of Harrell or Reed in the same deal. He mentions former Sixer Andre Drummond, whom the Bulls are reportedly open to trading, as an example of the type of traditional center the team wants to acquire.

Several teams have contacted the Timberwolves about Naz Reid, but Neubeck doesn’t expect him to be an option for Philadelphia. He also says the decision could wait for the buyout market, although it could be tough to find a long-term solution who’s content to be a backup for Embiid.

The NBA officially unveiled the 28-player pool for this year’s Rising Stars event on Tuesday, making the announcement via the NBA App. The following players made the cut:

As was the case last season, the Rising Stars event will consist of four teams and three games. The seven G League players will comprise one team, coached by longtime NBA guard Jason Terry. The other 21 players will be drafted to three squads coached by former NBA stars Pau Gasol, Joakim Noah, and Deron Williams.

All three contests will take place on Friday, February 17 as part of All-Star weekend in Salt Lake City. The NBA’s full press release with more information on the event can be found right here.

Bulls center Andre Drummond is a good candidate to be on the move prior to the February 9 trade deadline, according to Marc Stein, who notes in his latest Substack story that the veteran big man hasn’t been a regular part of Chicago’s rotation as of late.

Drummond wasn’t playing big minutes early in the season either, but has seen his playing time decline further since then, having received a handful of DNP-CDs in January. He has played more than nine minutes in only two games since the calendar flipped to 2023. For the season, the 29-year-old averaging 6.1 PPG and 6.6 RPG in 13.0 minutes per game in 36 appearances — all of those numbers are career lows.

Drummond isn’t on a minimum-salary contract, but his modest $3.2MM cap hit makes him an attainable trade chip for just about any NBA team. He does have a $3.36MM player option for 2023/24, so a club acquiring him would have to be comfortable with the possibility that he’ll exercise that option.

VanVleet’s agency change is coming at a pivotal time in his career. The seventh-year guard is headed for unrestricted free agency this summer if he and the Raptors don’t work out an extension before then — and if he turns down his player option for the 2023/24 season, which is viewed as a near-lock.

According to Stein, multiple teams around the NBA hope that the Raptors will start to become more receptive to trade inquires on VanVleet as the February 9 deadline approaches. The Magic have been mentioned more and more often in league circles as a “prime” VanVleet suitor this summer in free agency, Stein adds, though it’s unclear if Orlando would attempt to trade for him at the deadline.

There’s a huge market for Fred VanVleet if the Raptors decide to trade him, according to Eric Pincus of Bleacher Report.

The 28-year-old guard will be a free agent this summer if he turns down a $22.8MM player option, which Pincus says many league insiders expect to happen. VanVleet can negotiate an extension with Toronto through June 30, but the Raptors could try to move him before the deadline if they aren’t confident about reaching a new deal.

Pincus hears that the Heat, Lakers, Clippers, Timberwolves, Mavericks, Suns and Wizards would be among the most interested teams if VanVleet is made available. He also throws in the Magic, who are seeking an experienced lead guard to play alongside their young core.

The Raptors will want a premium price if they decide to part with VanVleet, Pincus adds, with some combination of young talent, draft assets and players on team-friendly contracts.

Pincus looks at a few other guards who could be changing teams before the deadline: