Jason Kidd, who has reached a deal to become Dallas’ new head coach, may not be the only former Mavericks point guard patrolling the team’s sidelines in 2021/22. According to Tim MacMahon of ESPN (Twitter link), J.J. Barea has had preliminary discussions about the possibility of joining Kidd’s coaching staff.

Barea has no formal coaching experience, having played in the NBA up until last year and in international leagues during the 2020/21 season. However, as MacMahon observes, the veteran guard has strong relationships with many members of the Mavericks’ organization – including Luka Doncic – and the team missed his presence this past season.

Another member of that 2011 Mavericks title team is also a candidate to join Kidd’s staff, according to Brad Townsend of The Dallas Morning News, who tweets that Jason Terry is in the mix for a role.

9:35am: Minnesota has officially announced Finch as its new head coach. 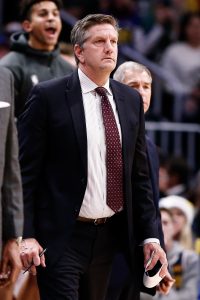 “I would like to thank Glen Taylor and Gersson Rosas for this incredible opportunity to be the head coach of the Minnesota Timberwolves,” Finch said. “I look forward to working hand and hand with Gersson to build and lead a team that Timberwolves fans will be proud of. We have excellent pieces in place and I can’t wait to get to work.”

“We would like to thank Ryan for his time and commitment to the Timberwolves organization and wish him the best in the future,” Wolves president of basketball operations Gersson Rosas said in a statement. “These are difficult decisions to make, however this change is in the best interest of the organization’s short and long-term goals.”

According to Shams Charania of The Athletic and Wojnarowski, Minnesota already has a replacement lined up for Saunders, having reached a deal to hire Raptors assistant Chris Finch. The two sides are finalizing a multiyear contract that will make him the Wolves’ permanent head coach rather than an interim replacement.

Saunders, who took the reins on Minnesota’s sidelines following Tom Thibodeau‘s exit from the franchise in 2018/19, compiled a 43-94 (.314) record across parts of three seasons with the team. Those Wolves clubs were plagued by injuries, with franchise center Karl-Anthony Towns missing 54 of Saunders’ 137 games with the team, but underperformed even when healthy, finishing 14th in the West a year ago and ranking last in the conference so far this year.

Finch, meanwhile, has interviewed for multiple head coaching jobs in recent years, but will be getting an opportunity to run his own NBA team for the first time. He did have a stint as a G League head coach with the Rio Grande Valley Vipers from 2009-11 and won an NBAGL title with the club before becoming an assistant for the Rockets from 2011-16. Rosas was part of Houston’s front office during that time, giving him a familiarity with Finch.

Since leaving the Rockets, Finch has been an associate head coach for the Nuggets (2016-17), Pelicans (2017-20), and Raptors (2020-21). He has a reputation of improving teams’ offenses, as Blake Murphy of The Athletic observes.

According to Wojnarowski, Finch is expected to officially begin the job on Tuesday when the Wolves play the Bucks in Milwaukee, and is expected to keep the team’s coaching staff intact for the time being. That staff includes associate head coach David Vanterpool and assistants Bryan Gates and Pablo Prigioni, Woj notes.

Hiring another team’s assistant coach after making an in-season coaching change is fairly unusual for an NBA team, according to Wojnarowski, who says it hasn’t happened since Memphis hired Lionel Hollins away from Milwaukee in 2009. Murphy suggests (via Twitter) that Toronto is probably more likely to promote a coach from the Raptors 905 once the G League season ends than to bring in someone from outside the organization to replace Finch on Nick Nurse‘s staff.

Reusse opines that former Timberwolves coach Tom Thibodeau‘s instincts were correct in making his 2017 trade with the Bulls to acquire Butler — but that the team erred in signing 2014 No. 1 pick Andrew Wiggins to a his full five-year, $148MM maximum contract extension. When it became clear that this meant Butler would not be able to get the kind of maximum extension he desired, he forced his way out of Minnesota.

There’s more out of the Gopher State:

Adding a new starter to the Nuggets lineup via a trade is an unlikely scenario, according to Nick Kosmider of The Athletic. Continuity has been one of Denver’s strength and a big trade would force the team to make the pieces fit at a time when other contenders are finding their footing, Kosmider continues. Playing Michael Porter Jr. remains a priority for the organization, Kosmider adds, and in a way he can be considered that major new addition.

Prigioni spent four years as an NBA player, including a brief stop in Houston in 2015 while new Minnesota president Gersson Rosas was an executive there. Prigioni will focus mainly on the Wolves’ offense, according to Wojnarowski.

The 42-year-old was a long-time star in Argentina and Europe become coming to the NBA. After retiring in 2016, he became head coach of Baskonia in Spain and joined Brooklyn’s staff prior as a player development coach to the start of this season.

Kenny Atkinson’s obsessive focus on individual player development led to his contract extension, Michael Scotto of The Athletic reports. ESPN reported on Monday that the Nets head coach would receive an extension, which Scotto confirms. Brooklyn is in playoff contention after winning 20 and 28 games the last two seasons.

“He has done arguably as good of a job as any coach in the league when you look at his improvement each year,” swingman Joe Harris said. “Obviously, I’m again biased just because I’m around him day in and day out and I see his approach and his competitiveness, his toughness, what he’s preached to us has trickled down to each one of the guys. He embodies what we are as an organization. We’re obviously not getting to this point without a leader like that.”

A pair of former NBA players have joined the Nets’ organization, the team announced today in a press release. Pablo Prigioni has been hired as an assistant coach on Kenny Atkinson‘s staff, while Tiago Splitter had been named a pro scout with additional duties related to on-court player development.

Prigioni, whose hiring was first reported by Brian Lewis of The New York Post, also received interest from the Knicks, with whom he spent two and a half seasons as a player. However, he ultimately chose to join the city’s other NBA team.

The longtime point guard transitioned to coaching after retiring as a player — he was named the head coach of Spanish team Baskonia last summer, but stepped down after just eight games, reportedly due to family issues. In Brooklyn, Prigioni will have an opportunity to work with promising young guards like D’Angelo Russell, Spencer Dinwiddie, Isaiah Whitehead, and Caris LeVert.

As for Splitter, he announced his retirement as a player due to health issues earlier this year, and had expressed an interest in coaching in the past. While the former Spurs center won’t technically be a member of Atkinson’s staff in Brooklyn, it sounds like he’ll get the opportunity to work with some Nets players in addition to his scouting duties.

The Knicks are considering a reunion with old friend Pablo Prigioni, but as a developmental coach rather than as a player, two industry sources tell Marc Berman of The New York Post. Prigioni, who played for the Knicks from 2012 to 2015, has retired as a player and was named the coach of Spanish team Baskonia last summer, but had to step down after just eight games due to family issues, a source tells Berman.

Now, Prigioni is back in New York, with a source telling Berman that the former NBA point guard is spending the week with the Nets to learn about Brooklyn’s basketball operation. While it’s unclear whether the Nets are also interested in hiring Prigioni, the 40-year-old is “exploring” whether he wants to become a personnel man, says Berman.

As we wait to see whether Prigioni returns stateside to take a job with one of the NBA’s New York teams, let’s round up a few more notes on those two clubs…

It’s been two years since Timberwolves icon Flip Saunders, then the franchise’s president of basketball operations, passed away from Hodgkin’s lymphoma. The man’s impact on the organization is still felt to this day, Jon Krawczynski of The Athletic writes.

Saunders played a vital role in the club’s recent return to relevance both from a business and personnel perspective. The celebrated executive’s touch can be seen at all levels of the organization from the new practice facility that Saunders helped design to the transactions he made in the wake of David Kahn‘s time at the helm from 2009 to 2013.

Saunders remains the only head coach in franchise history to lead the team to the playoffs, having done so eight times from 1997-2004 during his first run with the franchise. Since 2006, the team has cracked a .400 win percentage only once.

“I made a promise to Flip Saunders that we would win and end the playoff drought,” current franchise cornerstone Karl-Anthony Towns said on the media day of his rookie season shortly before Saunders passed. “And I intend to keep that promise.”

There’s more from around the league:

Neither Pablo Prigioni nor C.J. Wilcox currently has an NBA contract, with Prigioni transitioning to coaching and Wilcox having agreed to a two-way deal with the Trail Blazers. However, before Wilcox reached an agreement with Portland, it appeared he may reunite with Prigioni, who was his teammate with the Clippers during the 2015/16 season.

As international basketball reporter David Pick details (via Twitter), Prigioni – now the head coach of Baskonia in Spain – had been recruiting his former Clippers teammate in the hopes of signing him to a $500K contract. Wilcox will earn less than that on his new two-way deal, so remaining stateside and getting the opportunity to see a little NBA action was likely a key factor in his decision.

Here’s more on the Clips and their Pacific rivals: