Cavaliers guard Ricky Rubio, who suffered a torn left ACL last December, is hopeful he can return to action this December, but won’t put a timetable on it, Chris Fedor of the Cleveland Plain Dealer writes.

“I wanted to be ready for training camp but I knew it was impossible,” Rubio said. “Talking with my trainers and medical staff, they say 10-12 months but it’s a long range. It changes every week. At the end of the day, putting a date on it, for me personally, I need it. But I think it’s not good to put a date when I’m going to be back.”

Rubio returned to Cleveland on a three-year, $18.4MM contract.

The Cavaliers‘ trade for Donovan Mitchell came together quickly last week after the Knicks decided to give an extension to RJ Barrett, Chris Fedor of Cleveland.com says in a HoopsHype discussion with Michael Scotto. The Cavs and Jazz held unproductive talks regarding Mitchell in July at the Las Vegas Summer League, but president of basketball operations Koby Altman reached out again after news leaked of Barrett’s extension, asking if Utah would accept a package that didn’t include Darius Garland, Jarrett Allen or Evan Mobley.

The resulting deal gives Cleveland four potential All-Stars who are under contract for the next three seasons, along with $2.5MM in remaining cap room to fill out the roster. Fedor notes that the Cavaliers have a history of keeping a roster spot open for flexibility, so the next move may not happen right away. He suggests Cleveland may try to package Caris LeVert or Cedi Osman along with second-round picks in an effort to trade for a reliable small forward.

Scotto points out that Collin Sexton was a big winner in the trade because he had to be re-signed before he could be sent to Utah. Scotto hears that Sexton’s new four-year, $72MM contract is far beyond what Cleveland would have offered to keep him. The Cavs had been unwilling to exceed the luxury tax threshold to re-sign Sexton or to attach assets in an Osman trade to clear more room below the tax to increase their offer to Sexton.

There’s more on the Cavaliers from Fedor and Scotto:

As part of the trade sending Malcolm Brogdon to Boston, new Pacers Nik Stauskas, Juwan Morgan, and Malik Fitts all received significant partial guarantees on their minimum-salary contracts for 2022/23.

The Cavaliers will use a portion of their mid-level exception to sign Ricky Rubio, Chris Fedor of the Cleveland Plain Dealer tweets. Rubio has agreed to a three-year, $18.4MM contract to return to Cleveland.

Rubio, who suffered a torn ACL in late December, finished the season with the Pacers. The Cavs’ front office explored the possibility of a sign-and-trade with the Pacers but couldn’t come to an agreement, Fedor explains.

Here are a few more contract-related notes from around the league:

The Cavaliers were decisive and intentional in the areas they wanted to address in free agency, writes Chris Fedor of Cleveland.com (subscriber link). As Fedor previously outlined, bringing back Ricky Rubio was always the top priority in early free agency, but because Rubio is expected to miss at least the first few months of next season while recovering from a torn ACL, the Cavs needed to bring in a second backup point guard to fill in for a while, which is why they agreed to a deal with Raul Neto.

Rubio has been rehabbing in Spain, but sources tell Fedor that the point guard is expected to travel to Cleveland shortly after his signing becomes official so his progress can be checked by team doctors. Adding two backups point guards instead of one creates a roster crunch for the Cavaliers, as after reaching a deal with backup center Robin Lopez, the team will have 15 players under contract with Collin Sexton still a restricted free agent.

Cleveland expects Rubio’s on-court impact could be limited in the first year of his deal, per Fedor, which is why the Cavs brought him back on a three-year contract, with the third year being partially guaranteed. A sign-and-trade with Indiana to free up a roster spot and money remains an option, according to Fedor, who points to Dylan Windler and Cedi Osman as players who could be on the move — if the Pacers are interested.

As for Sexton, sources tell Fedor that the Cavs are determined to stay below the luxury tax line — they’re currently about $15MM below — and view Sexton as worthy of a deal that would pay him in the low-to-mid teens annually. However, despite positive developments in recent negotiations, sources tell Fedor that Sexton wants “starting guard money with an annual salary that starts with a 2, not a 1.”

“He has no market,” an opposing executive told Cleveland.com.

Fedor says the negotiations might take a while, and Sexton accepting his $7.2MM qualifying offer in an attempt to rebuild his value and reach unrestricted free agency in 2023 is a real possibility. Sources also tell Fedor that Darius Garland‘s five-year max extension with the Cavaliers is a straight five-year deal with no player option in the fifth season.

The Cavaliers‘ agreement with Ricky Rubio remains flexible and could eventually become a sign-and-trade with the Pacers, sources tell Chris Fedor of Cleveland.com. Rubio, who suffered a torn left ACL last December, isn’t expected to be able to play for the first two or three months of the season, so the Cavs want to explore other point guard options.

If they do a sign-and-trade with Rubio, they’d be able to use their $10.4MM mid-level exception to address that area, and Fedor suggests that another signing could be reported sometime this weekend.

Bringing back Rubio was “Plan A” for the team, Fedor adds, after he helped fuel a surprising rise to contention last season. Serving as a veteran component in a young backcourt, Rubio averaged 13.1 points, 4.1 rebounds and 6.6 assists in 34 games before the injury. Cleveland was 20-14 with Rubio last season, but only 24-24 when he didn’t play.

JULY 8: The Cavaliers have officially signed Rubio, the team announced in a press release. As we previously relayed, the team used its mid-level exception to complete the deal after a sign-and-trade didn’t materialize. 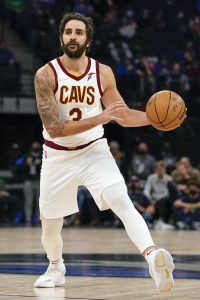 Based on the financial details reported by Haynes, it appears Cleveland will use a portion of its mid-level exception to sign Rubio. Adrian Wojnarowski of ESPN (Twitter link) was the first to report the two sides were nearing a deal.

Cleveland acquired Rubio from Minnesota in a 2021 offseason trade and he played a key role in the Cavs’ first-half success this past season. Despite serving primarily as a reserve, the 31-year-old averaged a career-high 13.1 PPG to go along with 6.6 APG and 4.1 RPG in 34 games (28.5 MPG).

However, Rubio’s season came to an early end when he tore his left ACL in December. The Cavs subsequently used his expiring contract as a salary-matching piece in their trade for Caris LeVert, resulting in Rubio finishing the season with the Pacers.

There had been reports throughout the offseason indicating that there was mutual interest in a reunion between the Spaniard and the Cavs — that reunion has now come to fruition.

ACL tears can sideline NBA players for a full calendar year or more, and even when they return to the court, it often takes them some time to get back to full speed, so expectations for Rubio in 2022/23 – especially in the first half – should be tempered.

Given that Cleveland agreed to a three-year deal though, it seems as if the team is counting on him to be around for the long haul and will be patient as he recovers from his knee injury and gets his feet back under him.

Once Rubio is healthy, he figures to once again slot into the backup point guard role behind All-Star guard Darius Garland.

Jaden Ivey‘s family has a long connection to Detroit, and the Pistons are showing their appreciation to their newly drafted point guard, writes Rod Beard of The Detroit News. The organization presented Ivey with replicas of jerseys worn by his mother, father and grandfather — made more than three weeks ago “just in case” the Pistons were able to select him — and much like draft night, Ivey was overcome by tears.

“You could see my emotions a little bit,” he said. “Just my family, what they’ve been through their whole lives and what they’ve worked for, they helped me get to this stage, just to see all the jerseys it just made me emotional.”

Ivey will be part of the foundation of the team’s rebuilding project, forming a dynamic backcourt with Cade Cunningham, last year’s overall No. 1 pick. The city is already embracing Ivey as he continues the family’s sports legacy in Detroit.

“I’m gonna say this,” coach Dwane Casey said, “the history and story of Jaden is unbelievable. It’s like a fairy tale. Even from me, and I’ve been in (the league) a long time. To understand his grandfather played here, his dad went to high school here, his mom played in the WNBA here, successful college coach right now, it’s beyond belief. And like (general manager) Troy (Weaver) said, the good Lord wanted him here.”

The Cavaliers view Jalen Williams as a peripheral prospect with the No. 14 pick, but he’ll get a chance to change their minds at a workout Monday, writes Chris Fedor of Cleveland.com. Williams said that session will be his last one before Thursday’s draft and only his third for a lottery team, with the Spurs and Thunder being the others. Williams has reportedly been moving up draft boards and believes his lack of exposure at Santa Clara caused some teams to overlook him.

“Teams haven’t seen me a lot just due to the fact that we were a west coast team playing late at night,” he said. “Just showcasing that I’m a lot bigger than what it looks like on TV and I’m more athletic. Honestly, just playing my game, going in there and competing with other dudes that are doing the same thing as me. Just show a good, positive attitude throughout the whole workout. Everyone here can hoop so try to do the little things to stand out.”

The Cavs might have a greater interest in Williams if they trade down, which is under consideration, according to Michael Scotto of HoopsHype. Scotto hears from league sources that Cleveland would be willing to move backward in this year’s draft in exchange for a future first-round pick.

The Sixers are exploring potential trades involving the No. 23 pick in the 2022 draft and Danny Green‘s expiring $10MM contract, Kevin O’Connor of The Ringer reports within his latest mock draft.

Because they owe their unprotected 2023 first-round pick to Brooklyn, the Sixers can’t trade their 2022 first-rounder until after it has been used. However, they could reach a tentative trade agreement on or before draft night and make that pick on another team’s behalf, officially completing the deal after the draft.

Using Green’s expiring contract as a salary-matching piece would also be a little tricky, since it’s currently non-guaranteed, meaning it would count as $0 for outgoing purposes. The Sixers could guarantee some or all of Green’s $10MM salary to make it more useful in a trade. But the more money they guarantee, the less appealing it will be as an asset to a potential trade partner, since Green is expected to miss most or all of next season after tearing his ACL.