Prior to the Lakers‘ game against Indiana on Wednesday night, head coach Frank Vogel addressed recent rumors about his tenuous job security, suggesting he’s unfazed by reports that state he’s on the hot seat and is being evaluated on a game-to-game basis.

“I don’t feel like I’m under siege,” Vogel said, according to ESPN’s Dave McMenamin. “It’s not hard to do my job; I’m very focused on the task at hand. I’ve always been that way.”

Although Vogel downplayed concerns about his status, his decisions down the stretch in the Lakers’ loss to the Pacers seemed to reflect some added urgency. As McMenamin writes in a separate story, Vogel removed nine-time All-Star Russell Westbrook from the lineup during crunch time after Westbrook continued to struggle with his shot and failed to execute on defense. Vogel said after the game he was “playing the guys that I thought were going to win the game.”

According to McMenamin, the Lakers’ coaching staff has been debating for weeks whether to remove Westbrook during late-game situations, but had hesitated due to concerns about how it would affect the guard’s psyche. The staff finally pulled Westbrook in the fourth quarter on Wednesday after receiving assurances from management that it supported the hard-line stance, sources tell ESPN.

Westbrook left the arena after the game without speaking to reporters, but it’s probably safe to assume he wasn’t thrilled to be on the bench for the final 3:52 of the loss. “Would you think that would bother Russ not being in a late game?” teammate LeBron James asked rhetorically when reporters pressed him on the subject.

The Lakers have cleared Anthony Davis to begin on-court, full-contact workouts, according to Dan Woike and Broderick Turner of The Los Angeles Times. Davis, who hasn’t played since December 17 due to a sprained left knee, underwent a reevaluation on Monday and team doctors determined that recent testing showed no damage to the knee.

Although Los Angeles hasn’t provided a specific timeline for Davis’ return, people with knowledge of the situation tell Woike and Turner that the big man could be back during the club’s upcoming six-game road trip. That trip will begin on Friday in Orlando and runs through Sunday, January 30.

JANUARY 17: Johnson is officially back with the Lakers on a new 10-day contract, the team confirmed today (via Twitter).

Johnson has received significant playing time over the course of his two 10-day deals, carving out a role on the team. In nine games, he’s averaged 5.4 points and 2.3 rebounds in 20.3 minutes per contest, shooting 46% from the floor. He’s started in five of those games.

Prior to signing with the Lakers, Johnson was playing with the team’s G League affiliate. The 25-year-old holds past experience with the Pistons, Pelicans and Raptors.

Los Angeles has lost three straight games and currently ranks seventh in the West at 21-22. This will be Johnson’s second standard 10-day contract (his first was a hardship), meaning the Lakers will have to sign him for the rest of the season or let him go once it expires.

JANUARY 5: Forward Stanley Johnson is likely to sign a 10-day deal with the Lakers on Thursday, sources tell Dave McMenamin of ESPN (via Twitter). Johnson’s 10-day hardship deal with the Lakers expired on Monday, and he made a strong impression on the club with his on-ball defense and toughness, says McMenamin.

The 25-year-old Johnson averaged 6.8 PPG, 2.8 RPG, and 1.4 APG in five games (three starts) with Los Angeles. As ESPN’s Bobby Marks tweets, there’s no difference in salary between signing Johnson to a couple of 10-day deals and then signing him to a contract that covers the rest of the season at the end of January vs. signing him to a rest-of-season deal on Thursday, so the move is all about maintaining roster flexibility ahead of the trade deadline on February 10.

Johnson, a Los Angeles native, signed with the Bulls on a 10-day hardship deal last month but never suited up for the team after entering the league’s health and safety protocols. He spent training camp and preseason with Chicago, but was released prior to the season. He had been playing with the Lakers’ G League squad, South Bay, prior to being called up to the NBA. In six games with South Bay this season (30.5 MPG), Johnson put up 15.3 PPG, 6.7 RPG, and 2.2 SPG with a .405/.286/.750 shooting line.

There had been mutual interest between Johnson and the Lakers to reach a contract agreement, especially after the team traded Rajon Rondo to the Cavaliers to clear a roster spot. The No. 8 overall pick in the 2015 draft, Johnson has played for the Pistons, Pelicans, Raptors and Lakers since entering the NBA. He has proven capable of providing energy and defensive versatility, but his offensive game has always been limited. In 376 career regular season games, he has averaged 6.2 PPG on .376/.297/.764 shooting in 19.8 minutes per contest.

There’s mutual interest between the Lakers and Stanley Johnson to reach a contract agreement, Dave McMenamin of ESPN tweets.

Johnson has averaged 6.8 PPG on 45.8% shooting, 2.8 RPG and 1.2 SPG in five games, including three starts. He has also made a strong impact with his defense.

LeBron James started his second game of the season at center Friday night, and that could be the lineup tweak that helps the Lakers survive until Anthony Davis returns, writes Kyle Goon of The Orange County Register. James continued his recent hot streak with 43 points and 14 rebounds, and the added spacing created plenty of opportunities for his teammates.

“This could be something that makes the game easier for him,” coach Frank Vogel said. “He’s not wrestling so much and there’s more space for him to be a roller, there’s just a lot of positives to that. Can’t really get away with it with certain matchups on the other end and obviously when AD comes back he’s going to play a load at the five and then we can play this smaller lineup as well.”

The small-ball approach is familiar for point guard Russell Westbrook, who was with the Rockets when they adopted a center-less lineup two seasons ago. Vogel doesn’t want to make that type of commitment, saying the decision on when to use LeBron in the middle will depend on matchups.

“You play Houston, Christian Wood at center, that’s a clear, ‘Yeah, let’s put Bron at center.’ That’s an easy one,” Vogel explained. “Next game, Steven Adams, biggest, strongest guy in the league; let’s play Dwight (Howard) at center. That’s an easy one. These next few games in the middle, there’s gonna be a lot of in-between types of decisions that we have to make on a game-by-game basis.”

The Cavaliers are set to acquire Rajon Rondo from the Lakers in exchange for Denzel Valentine, which will mark the first trade of the 2021/22 regular season. Valentine, who’s on a partially guaranteed contract, is expected to be waived by Los Angeles.

According to Adrian Wojnarowski of ESPN (via Twitter), Rondo is enthusiastic about the opportunity to play more minutes with the young Cavs and was happy to learn of the trade after the Lakers informed him that it was a possibility.

Here are some more details on the transaction, which has yet to be officially completed:

Russell Westbrook is being criticized for a poor shooting night Saturday against the Nets, but LeBron James came to the defense of his teammate after the Lakers suffered their fifth straight loss, writes Dave McMenamin of ESPN. Westbrook turned in another triple-double, but he shot just 4-of-20 from the field, committed five fouls and three turnovers, and missed a shot at the rim in the closing seconds of the game.

“He gave us extra possessions, he gave us a lot of looks around the basket, which I know that he can’t stand (failing to convert) as well,” James said. “But as far as the effort piece, if a guy plays hard, if a guy leaves it all out on the floor, I got no problem with that. It’s a make-or-miss league.”

L.A. sent three rotation players and a draft pick to the Wizards over the summer to acquire Westbrook, who they hoped would form a dangerous Big Three with James and Anthony Davis. However, the results have been mixed at best as the Lakers are 16-18 and Westbrook is averaging just 19.6 points per game, shooting 45.1% from the field and 30.4% from three-point range and committing 4.6 turnovers per night. There have been rumors that the front office has already discussed trading him, but his contract, which includes a $47.1MM player option for next season, makes that difficult.

“A big part of it is he just wants it so bad,” acting head coach David Fizdale said. “I mean, you can just see it in him, everybody does. He wants it so bad. And I know that’s just hard for him when it doesn’t work out. And I know he cares like crazy.”

4:45 PM: The 10-day contracts for Collison and Johnson are now official, per Kyle Goon of The Southern California News Group (via Twitter).

12:28 PM: The Lakers intend to sign guard Darren Collison and forward Stanley Johnson to 10-day contracts via hardship exceptions, according to ESPN’s Adrian Wojnarowski, who reports (via Twitter) that the team hopes both players can be available for Saturday’s Christmas Day contest vs. Brooklyn. 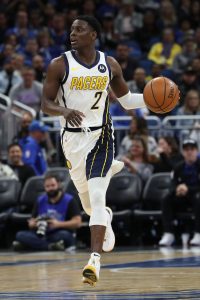 There were reports that Collison might return with the Lakers or Clippers during the ’19/20 season, but nothing came of those rumors and he later said they were overblown. However, the 34-year-old reportedly worked out for the Lakers and Warriors this summer, signaling that he remained open to the idea of a comeback. Now, for at least 10 days, it’s happening.

Johnson, 25, signed a 10-day hardship deal with the Bulls earlier this month, but entered the health and safety protocols before appearing in a game with the team. Assuming he tested positive for COVID-19, it appears he’s now fully recovered.

The No. 8 overall pick in the 2015 draft, Johnson has played for the Pistons, Pelicans, and Raptors since entering the NBA. He has proven capable of providing energy and defensive versatility off the bench, but his offensive game has always been limited. In 371 career regular season games, he has averaged 6.2 PPG on .375/.298/.761 shooting in 19.7 minutes per contest.

Collison and Johnson will be the Lakers’ third and fourth hardship signings, joining Isaiah Thomas and Jemerrio Jones. The team currently has five players in the NBA’s health and safety protocols.

The Bulls‘ COVID-19 outbreak continues with Ayo Dosunmu and Stanley Johnson both being placed in the NBA’s health and safety protocols, writes Rob Schaefer of NBC Sports Chicago.

They are the sixth and seventh Chicago players to enter the protocols, along with Coby White, Javonte Green, DeMar DeRozan, Matt Thomas and Derrick Jones Jr.

Johnson just joined the team on Thursday, signing a 10-day deal under the hardship exception. The Bulls added a second hardship player, Alfonzo McKinnie, on Friday. Dosunmu, a rookie guard, has started the last two games due to the depleted lineup.

The Bulls still have 11 active players, so there doesn’t appear to be any danger of tonight’s game in Miami being postponed. The NBA hasn’t called off any games so far this season after COVID-19 caused chaos with the schedule last year, particularly in the early part of the season.

Schaefer adds that Alex Caruso, who has missed the past three games with a strained right hamstring, has been listed as available for tonight.