Appearing on JJ Redick’s Old Man and The Three podcast, Pacers point guard Tyrese Haliburton provided an update on his recovery from the elbow and knee injuries he sustained earlier this month. The team announced on January 12 that Haliburton would be reevaluated in two weeks, and he’s hoping that he won’t be out much longer than that.

“Starting to get stronger every day, feeling better every day,” he said (hat tip to Tony East of SI.com). “Got my second opinion, so things are going well. Hopefully in the next 11, 12 days, I feel better and can get back to start February. That’s the goal.”

A strong candidate to earn his first All-Star nod, Haliburton had been averaging 20.2 points and 10.2 assists per game for the surprisingly competitive Pacers, with shooting averages of 48.0% from the floor and 39.9% on threes, before he went down.

Indiana had a 23-18 record entering the game in which Haliburton got injured, but lost that night and have dropped four more contests since then to fall to .500 (23-23). While they won’t rush back their star player, the slumping Pacers would certainly be happy if he’s able to make it back sooner rather than later.

The Warriors tried out a new starting and closing lineup on Thursday in a Finals rematch again Boston, subbing in Jordan Poole for Kevon Looney. The five-man unit of Poole, Stephen Curry, Klay Thompson, Draymond Green, and Andrew Wiggins was less stout defensively, but was more dynamic on offense — it’s a look head coach Steve Kerr suggested he plans to stick with for now, per Anthony Slater of The Athletic.

“Just wanted to open up the floor,” Kerr said. “Give us a little different look. Maybe get a spark. We’re past the halfway point and we’re .500. Like, let’s try something different. … It’s a lineup we know can be explosive. Against Boston, in particular, you have to open up the floor. I think I’ll keep doing it.”

Following Thursday’s loss, the defending champions are now 22-23, a game below .500. It makes sense that Kerr would be looking to generate a spark with a lineup shake-up, and his players are on board with giving the new starting group a shot.

“There’s strength and weaknesses to it,” Curry said after Thursday’s game. “But we got great shots with it tonight. Came out with a lot of juice. We gotta be better at rebounding. If we give up size, we gotta be more physical, prepared to rebound. But it gives us great space and gets us great shots, and you gotta like the way we can play fast and put pressure on defenses.”

Last week, with the Clippers in the midst of a six-game losing streak that dropped their overall record to 21-21, veteran swingman Norman Powell spoke to his teammates to reiterate his confidence in the group and to remind them what they’re capable of, writes Andrew Greif of The Los Angeles Times. Powell, along with Kawhi Leonard, was a member of the Raptors team that won a championship in 2019 and believes this year’s Clippers have a similar ceiling.

“I talked to the team. I told them: ‘This team is deeper than the Raptors team I was on. It’s all about identity and who we are and how we’re going to play,'” Powell said. “I feel like every team goes through it. If you look back at championship teams and top teams, there’s always a point in the season where you get here. And we’ve been here a couple times for whatever reason it is, and it’s just gutting up and taking it and coming out of it.”

The 2018/19 Raptors were far more consistent than this year’s Clippers have been, but Powell pointed to a stretch in January 2019 when Toronto lost three of four games (the third at home to Milwaukee on national TV) as a turning point for that club. There’s hope that the Clippers’ recent slide can galvanize this team in the same way and compel them to play with more urgency in the second half.

“The identity of who we are every single night that we’re on the floor is the biggest thing that we have to figure out, and that doesn’t matter who’s suiting up that night,” Powell said. “It’s just, we’re going to be a hard-nosed, tough-playing defense. We’re going to be an offense that moves the ball, attacks you, puts pressure on the rim and generates open shots. And that’s not — PG (Paul George) doesn’t have to play for that, Kawhi doesn’t have to play for that. That’s just an identity and style of basketball we have to start really locking into now.”

The Clippers snapped their losing streak and got back over .500 with a victory over Dallas on Tuesday.

The Clippers headed into Tuesday’s game against Dallas on a six-game losing streak. However, coach Tyronn Lue drew some positives from the way the team competed in a four-point loss to Atlanta on Sunday, Janis Carr of the Orange County Register writes. “We had a conscious effort of playing the right way and so I could live with the results,” Lue said. “We have to keep working. Nobody’s going to feel sorry for us. But I’m encouraged.”

The Warriors‘ lineup will get a major upgrade on Tuesday night, according to Kendra Andrews of ESPN, who reports (via Twitter) that Stephen Curry will return and start as Golden State hosts the Suns.

Curry suffered a left shoulder subluxation in the Warriors’ loss to Indiana on December 14 and has missed the last 11 games as a result of the injury. President of basketball operations Bob Myers said last week that the club was hoping Curry would be able to return this Friday — the former MVP will be back on the court even earlier than that.

Golden State has had an up-and-down run since Curry went down. The team lost three of its first four games without him, including a pair of blowouts, then reeled off a five-game winning streak before losing its last two contests at home to Detroit and Orlando. The Warriors will take a 20-20 record into Tuesday’s home game vs. Phoenix before departing for a five-game road trip.

Curry is the third Warrior to return from an injury absence in the past week. Andrew Wiggins was back on Saturday after missing 15 games due to an adductor strain and illness, while Andre Iguodala made his season debut in the same game after being sidelined for most of the first half with a hip issue.

Stephen Curry‘s return could be imminent. Curry participated in Monday’s practice and scrimmages, according to ESPN’s Kendra Andrews, and he’s listed as questionable to play against Phoenix on Tuesday. Curry hasn’t played since Dec. 14 due to a shoulder injury.

The Warriors have been forced to rely more than they expected on two-way players Anthony Lamb and Ty Jerome, and both are starting to get close to their game limits for the season, writes Dalton Johnson of NBC Sports Bay Area.

NBA rules state that two-way players can’t be on the active roster for more than 50 games and they’re not eligible for the playoffs. With the season not quite at the halfway point, Lamb has already appeared in 31 games, while Jerome has played 25 and had two more in which he was active but didn’t get on the court.

“We have to navigate that,” coach Steve Kerr admitted. “There will be some games where those guys will not suit up.”

Lamb, who is on his third team in three years, signed with the Warriors in October shortly before the start of the regular season. He has earned a consistent role off the bench, averaging 6.6 PPG in 19.3 minutes per game. Jerome also came to Golden State in October, after being traded and waived during the offseason, and is putting up 7.5 PPG in 18 minutes per night.

“It says a lot about the culture,” Andre Iguodala said, “just with them looking for guys like that who will make the most of their time here and even extend their time because of their work ethics.”

Warriors president of basketball operations Bob Myers is optimistic that reigning Finals MVP Stephen Curry can return to action sometime next week, possibly next Friday in San Antonio, according to ESPN’s Kendra Andrews. 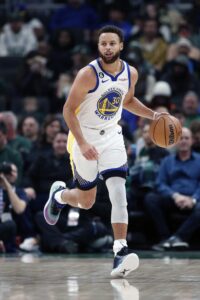 “He’s working out on the court, and the two-week mark to reevaluate him this weekend,” Myers said on Bay Area radio station 95.7. “There have been no setbacks, so (next Friday) would be a hope. That’s what we would be shooting for, something in that range when he could be back. He’s been, not contact, but out there doing all this stuff. He looks like the same guy. He’s got a sleeve on his shoulder and arm.”

The Warriors announced earlier today that Curry would be reevaluated on Saturday. He sustained a left shoulder subluxation on December 14 while trying to strip the ball away from Pacers big man Jalen Smith. Next Friday, January 13, would be just over four weeks since he was initially injured.

Head coach Steve Kerr confirmed that next Friday is a realistic timetable for Curry’s return, tweets Anthony Slater of The Athletic.

When Curry first went down, there was some fear that Golden State’s season might spiral out of control. The team lost three of its first four contests without the star guard, including a couple of blowouts.

However, the Warriors have righted the ship, reeling off five straight home wins to move to 20-18, the No. 9 seed in the West. The Warriors finish off their lengthy home stand against Detroit (Wednesday), Orlando (Saturday) and Phoenix (next Tuesday) prior to the January 13 contest in San Antonio.

The Warriors provided updates (via Twitter) on several injured players on Wednesday evening. Star guard Stephen Curry will have his left shoulder reevaluated on Saturday, which is in line with what the team previously announced.

Starting forward Andrew Wiggins has begun practicing and is ramping up his conditioning after missing the past 14 games due to a strained right adductor and then an illness. He will be reevaluated later this week, per the team.

The Warriors also announced that JaMychal Green (right lower leg infection), Jonathan Kuminga (right foot sprain) and James Wiseman (left ankle sprain) will all be out at least one more week — that’s when they’ll be reevaluated.