Svi Mykhailiuk is taking advantage of the opportunity that the Pistons‘ early-season injuries have provided, writes Keith Langlois of NBA.com. Mykhailiuk was touted as an elite shooter coming out of Kansas last year, but he didn’t see much playing time as a rookie. He averaged 10.8 minutes in 39 games with the Lakers, then only appeared in three games after a midseason trade to Detroit.

That has changed in the early part of this season, as Mykhailiuk is seeing 17.4 minutes per night and even made his first career start. He is showing signs of his offensive potential, averaging 5.7 PPG and shooting a sizzling .448 from 3-point range.

“He’s in the gym every single day working on his game,” teammate Langston Galloway said. “In there early before everybody gets there. It’s been great to see. He’s working on coming off pick and rolls and knocking down shots. That’s what we need from him. Hope to see that the rest of the year.”

There’s more this morning from Detroit:

Pistons second-year small forward Sviatoslav Mykhailiuk is showing more effort on the defensive end and he’s getting more playing time as a result, Keith Langlois of the team’s website details. He scored a season-high 12 points in 22 minutes on Monday against Orlando and also cooled down Terrence Ross in the second half.

“We know who Svi is offensively, but his major challenge has been the defensive end,” Pistons head coach Dwane Casey said. “He still made a lot of mistakes (Monday), but he made up for it with hard play, compete, just being into Ross. … He was being physical, trying to get into Ross. Two weeks ago, he wouldn’t have been touching him. That’s a big first step for him.”

The Pistons hold a $1,663,861 team option on Mykhailiuk’s contract next season.

The addition of Tony Snell in a trade with the Bucks cleared the way for the rest of the Pistons‘ offseason moves, writes Keith Langlois of NBA.com. Milwaukee made Snell available in June to free up money to re-sign other players. Detroit, which was in the market for a small forward after moving Reggie Bullock and Stanley Johnson at the trade deadline, was happy to accept, getting the final first-round pick of this year’s draft as well in exchange for Jon Leuer.

Snell, who has played three seasons each with the Bulls and Bucks, comes to Detroit in the prime of his career. He’s a 3-and-D wing player who has taken 57% of his career shots from behind the arc. He’s in line for a starting role after averaging 6.0 PPG in 74 games last season.

Getting Snell in a trade enabled the Pistons to use their cap-exception money to address other areas. They added depth at point guard by signing Derrick Rose and Tim Frazier, then upgraded their frontcourt with the addition of veteran power forward Markieff Morris.

The Nets enjoyed their most successful free agent period ever this week, agreeing to deals with Kyrie Irving, Kevin Durant and DeAndre Jordan. The moves figure to make Brooklyn one of the Eastern Conference’s premier teams next season, one year after the Nets’ made the postseason.

Even with the likelihood that Durant misses most – if not all – of next season, Brooklyn figures to be in the hunt for a top seed. Current Net Spencer Dinwiddie, a crucial part of the franchise’s increased success as of late, reportedly played a major role in recruiting those aforementioned All-Stars.

For the first time, Dinwiddie addressed Brooklyn’s moves, giving a coy response to the nature of recruitment among NBA players today.

“The thing about the NBA, everything you read is plausible,” Dinwiddie said to The Athletic’s Michael Scotto. “And with that being said, obviously, it could’ve happened, it may not have happened.”

With the spotlight now shining on the Nets, Dinwiddie noted that the team expects to be in contention for not just a playoff spot but for a title in the coming seasons.

“Anytime you add two probably top-10 players in the world, multi-time All-Stars, you’re obviously going to get better,” Dinwiddie said. “It’s on the rest of us to kind of help facilitate that transition, and hopefully we can be a very good team next year.”

Here are Wednesday’s assignments and recalls from around the NBA G League:

Here are today’s G League assignments and recalls from around the NBA:

When they explored the market for Reggie Bullock prior to last week’s trade deadline, the Pistons had options beyond the Lakers’ offer of a second-round pick and Sviatoslav Mykhailiuk, writes Keith Langlois of Pistons.com. According to president of basketball operations Ed Stefanski, the Pistons could have instead had two second-round picks in exchange for Bullock, but liked Mykhailiuk enough to take him in place one of those picks.

“Instead of getting two seconds, we got Svi and a second,” Stefanski said. “We know he’s a prospect. We know he can flat-out shoot the basketball and we’re excited about seeing if we can develop him. The idea of putting a name to a player and getting a second-round pick was intriguing to us as opposed to bringing in two second-round picks.”

As Langlois relays, one of the Pistons’ goals has been to acquire controllable – and cheap – players on rookie contracts, since the team’s cap is otherwise loaded with pricey veteran deals. The club achieved that goal at the deadline by landing Mykhailiuk and Thon Maker, who is one more year left on his rookie contract after this season.

FEBRUARY 6: The Lakers and Pistons have each issued a press release confirming that the Bullock trade is now official. 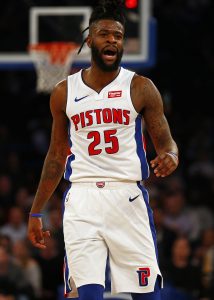 FEBRUARY 5: The Lakers have agreed in principle to acquire Reggie Bullock from the Pistons in exchange for Sviatoslav Mykhailiuk and a second-round pick, Frank Isola and Shams Charania of The Athletic report (Twitter links).

Detroit will receive Los Angeles’ 2021 second-round pick, tweets James Edwards III of The Athletic. The deal is expected to be finalized on Wednesday.

We relayed over the weekend that Los Angeles was one of several teams to call Detroit about the swingman. Bullock, 27, has a $2.5MM expiring contract, so he does not impact the Lakers’ cap situation for free agency this summer.

By trading Bullock, the Pistons will create a $2.5MM trade exception, per ESPN’s Bobby Marks. The Lakers will inherit Bullock’s Bird Rights (with a cap hold of $4.75MM) entering free agency his summer.

In his sixth NBA season, Bullock is averaging a career-best 12.0 PPG through 43 games and gives the Lakers some much-needed outside shooting help. He is shooting the ball at a 38.4% clip from three-point range this season, which is slightly below his career average of 39.6%.

As for the Lakers, they are parting with one of their second-round picks (47th overall) from last year’s draft. The Ukraine native has appeared in 39 games this season, averaging a mere 3.2 PPG. Per Marks, the Pistons will have until July 5 to guarantee Mykhailiuk’s $1.4MM salary for the 2019/20 season. His third season is a team option worth $1.6MM.

Assuming the trade is completed, the Pistons will move $1.5MM below the luxury tax for the season.

Lonzo Ball isn’t showing any effects of the knee injury that sidelined him for most of the summer, writes Ohm Youngmisuk of ESPN. Bell had surgery in July to fix a torn left meniscus, but he has been operating at full speed in training camp, impressing new teammate LeBron James.

“I didn’t know he was gonna be full go so fast,” James said. “He’s been going through live drills the last 2½ days. His bounce is there. His speed is there.”

Ball tried to address his knee problem with platelet-rich plasma injections early in the offseason before deciding surgery was necessary. His summer was filled with weight training and film sessions, and he wasn’t cleared for a full-contact practice until Thursday. Coach Luke Walton said he was “shocked” by Ball’s progress, but still plans to be careful with the second-year point guard.

“We’re gonna be patient,” Walton said. “No need to rush it right now. We’ll put minutes restrictions on him as he starts coming back in the preseason. And everything will be, ‘How do you feel?’ the next day, ‘How do you feel?’ that night. As long we keep checking those off and he’s fine, the minutes restrictions will go up and up until we decide to get rid of it altogether.”