Knicks center Mitchell Robinson has entered the concussion protocol after being hit in the face against the Rockets Saturday night, writes Marc Berman of The New York Post. He is out indefinitely.

Robinson, 23, was hit in the nose by an elbow from Jae’Sean Tate in the third quarter of the contest and did not return to the game, Berman relays.

Last season Robinson suffered a broken hand that sidelined him for 15 games. Four games after he returned, he had an awkward landing and broke his foot, which required surgery.

Robinson has still been dealing with lingering effects from the foot surgery this season, as he’s struggled with conditioning and multiple ankle sprains, Berman says. The big man also had a hip flexor injury less than two weeks ago.

Robinson will be an unrestricted free agent this summer. It’s tricky to gauge his market value due to his injury history and offensive limitations. Through 15 games, he’s averaging 7.1 points, 7.6 rebounds, and 1.7 blocks in 25.7 minutes per contest.

According to Berman, backup center Taj Gibson is also sidelined with a strained groin, while Nerlens Noel, who’s been dealing with knee issues, still isn’t 100%. Rookie Jericho Sims figures to see some playing time with the frontcourt so undermanned, while second-year forward Obi Toppin could see an increase in minutes.

Entering Monday’s game, Celtics center Enes Kanter has appeared in just two games this season, logging less than total 10 minutes in his latest stint in Boston. Kanter, who has been an outspoken critic of the Chinese government, published a social media post on Sunday implying that there may be a connection between his limited role on the court and his political stances off of it.

Speaking to reporters on Monday, Celtics head coach Ime Udoka dismissed the idea that Kanter has been out of the rotation due to his comments in the press and on social media.

“My thing is strictly basketball,” Udoka said, per Chris Forsberg of NBC Sports Boston (Twitter link). “We’re switching a lot and doing some things that probably are not as natural for him and that’s limited his time to some extent … Nothing basketball-related will be based on [social media].”

Kanter ended up seeing a little action on Monday in Cleveland, scoring five points in eight minutes as Boston defeated the Cavs by a score of 98-92.

The signing of Evan Fournier has added another dimension to the Knicks‘ offense, writes Zach Braziller of The New York Post. Fournier made a statement with 32 points in his first game with his new team, and although he hasn’t duplicated that, he has put up consistent numbers, averaging 14.9 PPG and shooting 37.5% from three-point range.

Fournier was barely mentioned as a target for New York when free agency began, Braziller notes, as the team was rumored to have more interest in Lonzo Ball and DeMar DeRozan. They both wound up in Chicago, so the Knicks lured Fournier away from Boston on a four-year, $73MM deal.

“I just like his playmaking, I like the shooting,” coach Tom Thibodeau said. “One of the things when you go back, we had to close the gap in the 3-point shooting. That was a big thing for us. Two years ago, we were so far behind in that. I think that he and Kemba (Walker) have added the right shot profile to what we’re trying to get accomplished. We still have room to grow in that area. Understanding how we get to those shots is important.”

Now that Knicks center Nerlens Noel has joined starter Mitchell Robinson on the sidelines due to a knee injury, New York is struggling with some serious depth problems at the five spot, per Marc Berman of the New York Post.

Robinson is dealing with a hip flexor injury and fatigue. In addition to knee and hamstring soreness, Noel is also battling a sore back. Deep-bench reserves Taj Gibson and rookie Jericho Sims have been pressed into service much more than had been expected prior to the 2021/22 season. Head coach Tom Thibodeau has also experimented with small-ball lineups featuring nominal power forward Obi Toppin at center.

There’s more out of the Big Apple:

Though he sat for his seventh straight game to start the season Monday night in a 113-104 loss against the Raptors, reserve Knicks center Nerlens Noel appears poised for a return, and not a moment too soon, as third-string center Taj Gibson sprained his ankle during the game’s first half, writes Greg Joyce of the New York Post. Rookie big man Jericho Sims served as Gibson’s replacement during the second half.

The Knicks re-signed Noel to the tune of a three-year, $28MM contract this summer. Noel has been struggling with a knee/hamstring injury since the preseason. During the 2020/21 season, his first with the Knicks, the former lottery pick averaged 5.1 PPG, 6.4 RPG and 2.2 BPG, while starting in 41 of his 64 total games.

Gibson has played a key role in New York’s 5-1 start to the season, providing frontcourt depth in Noel’s absence. Noel started in 41 of 64 games last season and helped the Knicks reach the playoffs for the first time since 2013.

“Right now I’m just trying to do what’s best for the team,” Gibson said. “When Nerls comes back, I’m gonna support him. That’s my young boy and I’m extremely happy because I know the work he puts in on a daily basis, and our big-man group, we work together. I’m happy to see everybody get some reps because I’m old enough.

“Whatever Thibs need me to do, the coaching staff, I just enjoy playing the game and being on this team.”

Nets owner Joe Tsai is hopeful that James Harden will finish his career in Brooklyn, according to Brian Lewis of the New York Post. Harden has yet to sign an extension but Tsai believes Harden is in it for the long-term. “The way I look at it is he’s already said I want to play and finish my career in Brooklyn: He’s actually said that. And our job is to make sure that he continues to feel that way,” Tsai said. “Obviously, if we win a championship and also have the chance to win multiple championships down the road, that’s going to be even more convincing, more compelling.“

We have more from the New York City teams:

Taj Gibson talked to several teams in free agency and some offered more money than the Knicks, but he preferred to stay in New York with coach Tom Thibodeau, writes Owen O’Brien of Newsday. Gibson re-signed for $10.1MM over two years with a team option on the second season.

“It was real frustrating, but it was a good frustrating,” Gibson said of the free agency experience. “But at the same time, I knew I made the right decision. Money doesn’t move me, I just wanted to be a Knick.”

Keeping Gibson was part of a busy offseason for New York, which added Kemba Walker and Evan Fournier in addition to re-signing several key parts of last season’s 41-31 team. Gibson said the Knicks look “really stacked” and he’s looking forward to resuming his role as one of their veteran leaders.

“They know I’m always willing and ready to play, but right now I’m just happy to be the vet on the team,” he said. “The guy that comes in and works out hard every day — but always capable — and I’m having a good time being with these young guys every day and just trying to build a culture.”

The Knicks have formally announced many of their offseason free agent signings in recent days, with new deals for Evan Fournier, Alec Burks, Derrick Rose, and Taj Gibson all becoming official.

We’re still waiting on the team to finalize its four-year extension for Julius Randle, along with some minor signings like Dwayne Bacon. But the flurry of transactions this week means that we now have details on several of the Knicks’ new contracts. Let’s dive in and round them up… 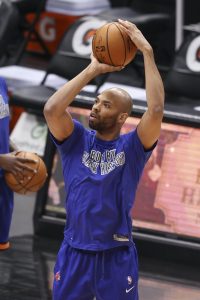 AUGUST 17: The Knicks and veteran big man Taj Gibson have reached an agreement to adjust the terms of the deal they initially agreed upon two weeks ago, reports ESPN’s Adrian Wojnarowski (Twitter link).

Gibson, who had been set to sign a one-year, minimum-salary deal, will actually receive a two-year deal worth $10.1MM, agent Mark Bartelstein tells Wojnarowski.

The Knicks have been slowly completing their offseason signings, starting with Nerlens Noel, Kemba Walker, and – most recently – Evan Fournier. New deals for Derrick Rose, Alec Burks, and Gibson have yet to be announced as New York determines the best way to maximize its cap space.

We’ll have to wait for more details on the adjustment to Gibson’s deal, but it sounds as if the Knicks determined they were in position to accommodate a slightly more lucrative salary for the 36-year-old. It’s a win-win for Gibson, who gets rewarded for his locker-room leadership over the last two seasons, and for the Knicks, who will now have a more tradable contract on the books without sacrificing any real cap flexibility.

The Knicks will use their room exception to complete the signing, as Bobby Marks of ESPN confirms (via Twitter). That exception allows for a two-year deal worth $10,065,500. New York had Early Bird rights on Gibson, but renounced him earlier in free agency in order to maximize cap room.

Gibson appeared in 45 games for the Knicks during the 2020/21 season, averaging 5.4 PPG and 5.6 RPG in 20.8 minutes per contest. He figures to provide depth up front behind centers Mitchell Robinson and Noel next season.