The Lakers have “some interest” in Jazz veterans Bojan Bogdanovic, Mike Conley and Jordan Clarkson, but are still trying to maintain their cap room for 2023, according to Jeff Zillgitt of USA Today Sports (Twitter links). The Lakers currently project to have about $30MM in cap room next summer.

Bogdanovic is on a $19.55MM expiring contract, and several teams are reportedly pursuing the 33-year-old forward, a talented scorer and shooter who has converted at least 38.7% of his three-point tries in each of the last five seasons.

In order to match salaries, Russell Westbrook‘s $47.1MM expiring deal would have to be sent to Utah, because the Lakers don’t have any tradable mid-sized contracts. If they don’t want to take on money beyond next season, a package of Bogdanovic, Malik Beasley and Nickeil Alexander-Walker theoretically works for salary-matching purposes, and all are on expiring or pseudo-expiring deals (there’s a ’23/24 team option for Beasley at $16.52MM).

However, it’s unclear if the Lakers would be interested in that scenario, considering the Jazz might ask for both of the Lakers’ available first-round picks (2027 and 2029). Utah is in the middle of a roster teardown, with a particular emphasis on accumulating unprotected first-rounders.

In other Lakers-related news, Jovan Buha of The Athletic reassesses the team’s depth chart and rotation after acquiring Patrick Beverley from Utah in exchange for Talen Horton-Tucker and Stanley Johnson. Sources tell Buha that Thomas Bryant and Austin Reaves have been “standout performers” in offseason workouts, and Buha currently has both players slotted in the starting lineup at center and shooting guard, respectively.

Carmelo Anthony may return to the Lakers for another season, but a decision isn’t expected quickly, according to Sean Deveney of Heavy. Like many NBA veterans, Anthony’s status is on hold while teams wait to see what happens with this summer’s trade rumors.

“They have a lot to sort out obviously,” an unidentified general manager said of the Lakers. “But as more things get set, they’ll probably get back around to bringing him in. It’s just, at this point, you don’t know what might happen with (Russell) Westbrook and whether you might need to take on players, so you see that around the league a lot — teams have 10, 11, 12 players signed and there’s no hurry to fill in the last spots until you see how the other stuff plays out.”

A return to the Knicks has been mentioned as a possibility for Anthony, and Deveney sees the Nets as a potential landing spot as well. Kevin Durant and Kyrie Irving reportedly wanted Brooklyn to sign Anthony when they joined the team in 2019, and adding him to the roster might be a way to mollify them if they’re both still with the Nets when training camp opens. The GM also mentions the Warriors, who would give Anthony his best chance to win a ring before he retires.

The Warriors only have 11 players on standard contracts so far, leaving at least three openings on their projected regular season roster. According to Anthony Slater of The Athletic, it’s possible one of those spots will be filled by Andre Iguodala.

Second-round pick Ryan Rollins also appears likely to claim one of the 15-man roster spots. He has a stress fracture in his foot, but Slater says there’s a belief he should be ready to go by training camp and he’ll likely receive a standard contract rather than a two-way deal.

Quinndary Weatherspoon, who received a two-way qualifying offer from the Warriors, is another player to watch, according to Slater, though he says the team’s preference would be to keep Weatherspoon on a two-way contract rather than a standard deal.

The Celtics had an open offer out to Thomas Bryant to fill the backup center spot in the rotation, team sources tell Jared Weiss of The Athletic, but Bryant opted to join the Lakers on a one-year, minimum-salary deal because he has a chance to become the starting center. Other teams that were interested in Bryant’s services included the Raptors, Bucks and Jazz, according to Chris Haynes of Yahoo Sports, who reported that Bryant was signing with Los Angeles.

Weiss writes that Bryant was taking a wait-and-see approach to how the Kevin Durant situation might play out in case another opportunity arose, but he decided to accept the Lakers’ offer before it disappeared. As Weiss relays, with Bryant off the board and the free agent center options either aging or relatively unproven, it remains to be seen which player Celtics president of basketball operations Brad Stevens might find to fill the backup role.

Here are a few more notes from Weiss about Boston’s plans for the rest of the roster:

4:02pm: The Lakers have officially signed Bryant, according to NBA.com’s transactions log. The big man told reporters today that he’s fully recovered from the ACL tear he suffered in early 2021. 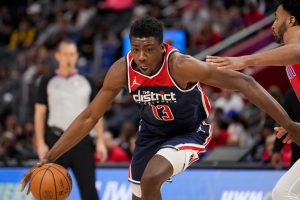 6:01am: The Lakers have reached an agreement with free agent center Thomas Bryant and will sign him to a one-year contract, reports Chris Haynes of Yahoo Sports.

Haynes doesn’t provide any specifics on the financial terms, but given that Los Angeles has committed to using its taxpayer mid-level exception on Lonnie Walker and is ineligible to acquire a player via sign-and-trade without shedding significant salary, it’s safe to assume it will be a minimum-salary deal.

Bryant, who will turn 25 later this month, began his NBA career with the Lakers, having been acquired from Utah in a draft-night deal in 2017. The 42nd overall pick appeared in just 15 games as a rookie with L.A. and was waived in the summer of 2018.

The Wizards claimed Bryant off waivers and the big man spent the next four seasons in D.C., though his time there was marred by injuries. After a promising 2019/20 season in which he averaged 13.2 PPG, 7.2 RPG, and 1.1 BPG in 46 games (36 starts), Bryant suffered a torn ACL early in the ’20/21 campaign. That injury resulted in him playing just 37 games over the last two seasons.

The former Indiana Hoosier could be an intriguing bounce-back candidate entering the 2022/23 season. According to Haynes, he’ll be given the opportunity to earn a spot in the starting lineup with his new team in Los Angeles.

Rudy Gobert‘s impending trade to Minnesota, in which Utah will receive multiple unprotected first-round picks, and a separate trade sending Royce O’Neale to Brooklyn for another first-round pick, could be seen as an indication that the Jazz might be rebuilding.

In an appearance on NBA Today, ESPN’s Brian Windhorst said (video link from Talkin’ NBA) the league is preparing for Jazz star Donovan Mitchell to request a trade, noting that O’Neale was one of Mitchell’s closest friends on the team.

“If you’re Donovan Mitchell and you see two trades like this that are designed to save more than $100MM and get first-round draft picks, that doesn’t inspire confidence,” Windhorst said. “And talking to league executives who saw some of this coming, they think it would be abnormal for Donovan to not want out at this point.

When the Gobert news broke, both ESPN’s Adrian Wojnarowski and Tony Jones of The Athletic said the Jazz planned to retool the roster around Mitchell rather than move him.

However, Andy Larsen of The Salt Lake Tribune hears (Twitter links) that it’s not a lock that the Jazz will keep Mitchell, saying there’s been some “push back” on those reports. The Jazz plan to keep their options open for all possibilities, according to Larsen, who notes that Mitchell could be a fallback option for the Heat if they’re unable to land Kevin Durant.

Here are a few more rumors from the Western Conference:

Although the Hornets fired him as head coach following the 2017/18 season, Steve Clifford still had a good relationship with general manager Mitch Kupchak and owner Michael Jordan, writes Steve Reed of The Associated Press. Those ties resulted in Clifford getting his old job back after Warriors assistant Kenny Atkinson pulled out of an agreement to coach the team.

“You want to evolve and get better at what you do,” Clifford said Tuesday at his introductory press conference. “I have coached a lot more games than I had when I was here the first time and worked with another team. You learn a lot from that.”

Clifford was brought in to fix a defense that ranked 22nd in the league this season, and he told reporters that will be an emphasis. Clifford doesn’t plan major changes to the offense, which will continue with a fast-paced philosophy led by LaMelo Ball.

“We are going to play offensively with a very similar emphasis that they have played with the last couple of years,” Clifford said. “Offense starts with playing through the strengths of your best players and Ball is a great talent with a passion for the game and a flair for playing in the open court and we want to take advantage of that.”