The Suns have formally issued a press release announcing new job titles in their front office and confirming the hire of veteran executive Jeff Bower, which was reported earlier this week.

Since the dismissal of general manager Ryan McDonough last fall, James Jones and Trevor Bukstein had been running the front office in Phoenix as co-interim GMs. Jones and Bukstein will stick with the Suns going forward, but only Jones will remain in the GM position on a permanent basis. Bukstein, who is more of a scouting and salary-cap specialist, will assume the role of assistant GM.

“James has demonstrated a remarkable ability to manage the day-to-day efforts of our front office while developing strong relationships with our players, coaches and those across our organization and league,” team owner Robert Sarver said in a statement. “Furthermore, he is instilling the same championship culture and standard that he experienced on multiple occasions as a player. I have the utmost confidence in James as the leader of our basketball operations moving forward, and we are aligned in the ultimate goal of one day bringing an NBA championship to Phoenix.”

It should be a busy offseason for the new front office in Phoenix — the Suns are in position to nab a top draft pick in the lottery, and will also have some cap flexibility, even if Tyler Johnson picks up his player option and Kelly Oubre is re-signed as a restricted free agent.

[RELATED: Suns expected to be active in free agency]

Of course, before addressing the roster in June and July, the Suns will need to make a decision on head coach Igor Kokoskov, who led the team to a disappointing 19-63 record in his first year in Phoenix. Greg Moore of The Arizona Republic questioned this week whether Kokoskov might be a one-and-done coach, but there has been no indication yet which way the Suns’ new decision-makers are leaning.

In an interesting, in-depth piece for ESPN.com, Kevin Arnovitz explores the Suns‘ front office, going into detail on the messiness and dysfunction in Phoenix over the last several years. Within the story, Arnovitz makes the case that the Suns have “no discernible direction,” as the roster, front office, and coaching staff have all undergone frequent changes since the club’s last playoff berth in 2010.

Arnovitz’s report includes several notable notes and rumors on the Suns – plus a terrific story involving live goats – and is worth checking out in full, but here are a few of the highlights:

The Suns have started the interview process to find a new general manager and plan to make changes in their basketball operations department before the draft, according to John Gambadoro of Arizona Sports.

James Jones and Trevor Bukstein, who are currently serving as co-GMs, may remain with the team even if neither gets the permanent job, Gambadoro adds. They have been sharing the role since former GM Ryan McDonough was fired in October, a week before the season began.

Sporting the league’s worst record at 12-50, Phoenix has been in turmoil for most of the season. Gambadoro notes that ESPN’s Adrian Wojnarowski provided a critical review of the organization on Tuesday, citing uneasiness in the league office about how the Suns are being managed.

“This is an organization that is in a spiral in almost every way,” Wojnarowski said. “It is a concern for the NBA. Owner Robert Sarver has not seemed to learn a lot of lessons throughout the years about his management style, his hands-on nature and his ability to put an infrastructure in place and allow it to build an organization.”

After firing McDonough, Sarver said it was time for the Suns to move beyond the rebuilding process and become competitive. Gambadoro points out that four evaluation specialists were dismissed at the same time as the GM, and the team has only hired ex-Sun Ronnie Price to take their place.

Former Suns guard and Hall of Famer Steve Nash has no interest in replacing GM Ryan McDonough, who was abruptly dismissed on Monday, ESPN’s Adrian Wojnarowski tweets. Though Nash is a favorite of owner Robert Sarver, Nash does not want the time-consuming responsibility of running a front office, Wojnarowski adds. Nash is currently a Warriors consultant. Vice president of basketball operations James Jones and assistant GM Trevor Bukstein have taken over GM duties in Phoenix on an interim basis.

We have more from Phoenix:

With the 2018/19 NBA regular season just eight days away, the Suns are shaking up their front office. Phoenix has fired general manager Ryan McDonough, according to Shams Charania of The Athletic (Twitter link). Vice president of basketball operations James Jones and assistant general manager Trevor Bukstein will take over GM duties on an interim basis, Charania adds (via Twitter). 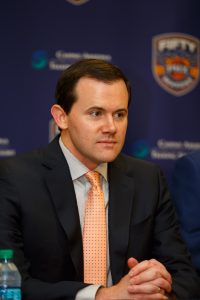 “After much thought and a long evaluation of basketball operations, I have decided to relieve Ryan McDonough of his duties as general manager of the Phoenix Suns,” team owner Robert Sarver said today in a press release confirming the move. “Our focus in the short term is to prepare for the upcoming NBA season and to continue pursuing opportunities to strengthen our roster. Over the course of the season, we will explore both internal and external options as we look to restructure our basketball front office leadership.”

The timing of the move is unusual, as teams generally make major front office changes in the spring, giving the new management group the opportunity to tackle the draft and free agency. McDonough also signed an extension last summer and had two years left on his contract, as John Gambadoro of Arizona Sports 98.7 observes (via Twitter). The fact that the Suns are moving on from McDonough now suggests that ownership hasn’t necessarily been thrilled with the club’s offseason moves.

The Suns landed the No. 1 pick in the 2018 draft and secured a potential franchise player in Deandre Ayton, then signed veteran forward Trevor Ariza in free agency. Phoenix also locked up Devin Booker to a long-term extension. However, the club’s efforts to acquire a starting-caliber point guard have thus far been unsuccessful, a potential source of frustration for ownership. As ESPN’s Adrian Wojnarowski notes (via Twitter), many potential trade partners that the Suns have spoken to have held out for an unprotected first-round pick in any deal.

McDonough’s tenure with the Suns began in May of 2013. The club won 48 games in his first season as general manager, but finished below .500 for the next four years, failing to record more than 24 wins in any of the last three seasons.

McDonough’s roster moves during his time in Phoenix have been hit and miss, with solid draft picks like Booker and T.J. Warren balanced out by less impactful top-10 selections like Alex Len, Dragan Bender, and Marquese Chriss.

The Suns have also rotated through three head coaches in the five years since McDonough was hired, going from Jeff Hornacek to Earl Watson to Igor Kokoskov. Additionally, it’s worth noting that the team’s hole at point guard might be particularly vexing for ownership since it wasn’t long ago that Goran Dragic, Eric Bledsoe, and Isaiah Thomas were all on the roster.

According to Wojnarowski (via Twitter), Sarver – who has recently become more involved in the Suns’ day-to-day operations – is fond of Jones, who will become a candidate for the organization’s permanent GM job. Wojnarowski also suggests that Kevin McHale is a long-term candidate to watch, while Marc J. Spears of The Undefeated wouldn’t be surprised to see former Cavs GM David Griffin receive consideration for the Phoenix position (Twitter links).

12:59pm: The move came at Babby’s behest, according to a statement he made as part of a Suns press release confirming the transition that the team has on its website.

“I am grateful that [owner] Robert [Sarver] has accommodated my wish to reduce my work load, while remaining a vital part of the Suns organization,” Babby said. “At this stage of my career, I welcome the flexibility that comes with this new role, a flexibility that will enable me to do other things that are important to me both personally and in the community. I feel particularly confident in making this transition because of the quality of leadership in place within the organization.”

The press release doesn’t indicate that McDonough will assume Babby’s job title of president of basketball operations. McDonough will nonetheless take on added responsibilities, as will assistant GMs Pat Connelly and Trevor Bukstein, the team said.

12:07pm: Suns president of basketball operations Lon Babby will move into a role as senior adviser and GM Ryan McDonough will become the team’s head of basketball operations on August 1st, reports Paul Coro of the Arizona Republic (Twitter link). Babby has held the president’s title since the 2010/11 season, when he and former GM Lance Blanks came aboard. Phoenix replaced Blanks with McDonough in 2013.

It’s not immediately clear whether Babby, who signed a two-year deal to stick with the Suns in 2013, is choosing to make this transition or if the team is pushing him aside. Phoenix has pivoted away from the Steve Nash era under his watch, but the team has yet to make the playoffs since Babby came aboard. McDonough appears to have had plenty of influence since his hiring, experimenting with a point guard heavy roster the last two seasons, with mixed results.

Babby is a former player agent whose clients included Tim Duncan, Ray Allen and Grant Hill. McDonough, who spent several years in the Celtics organization before joining the Suns, was Boston’s assistant GM for the three seasons prior to his move to Phoenix.