Pistons owner Tom Gores made it clear before the end of last season that there would be no haggling over money in negotiations with Andre Drummond. Gores declared publicly in April that Drummond is a “max player” and it seems as though every move the franchise has made recently is designed to build around the 22-year-old center. The only mystery regarding Drummond is whether he’ll receive an extension before the end of training camp or if he’ll come to terms on a new contract next summer. 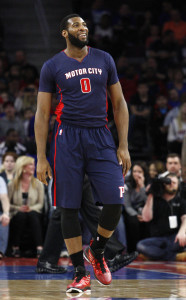 A maximum contract for the Jeff Schwartz client would be a projected $20.4MM starting salary with maximum raises of 7.5%. A four-year deal would put $90.78MM in Drummond’s bank account. He could also receive a fifth year if the Pistons make him their Designated Player, giving him a projected $117.3MM over the life of the contract.
In the highly unlikely scenario that Drummond wins the MVP award this season, he would qualify for an even greater max deal triggered by the Derrick Rose rule with a projected starting salary of $24.9MM.

It was already apparent from Drummond’s rookie season that the Pistons had been gifted a franchise player when he slid to the No. 9 selection in the 2012 draft. Only two All-Star talents — Anthony Davis and Damian Lillard — were selected ahead of Drummond, who played one inconsistent season with the University of Connecticut before turning pro. He quickly established himself as a ferocious rebounder in his rookie season, grabbing double-digit boards in 16 games before the All-Star break despite limited playing time. A back injury sidelined him most of the second half but a 29-point, 11-rebound performance against the Cavs in April of that season showed what he could do when healthy.

He’s turned into a double-double machine over the past two seasons, averaging 13.5 points, 13.2 rebounds and 1.6 blocks in his second year, followed by a 13.8/13.5/1.9 slash line last season. His 21.5 Hollinger player efficiency rating and 21.4 Basketball Reference PER placed him among the Top 25 players in the league last season.

Drummond, who will make $3,272,091 this season, is still just scratching the surface of his potential. His low-post game is still in the development stages — he’s a 35% shooter from 3-10 feet in his young career — and he’s a woeful 39.7% free throw shooter. That makes him a target for getting intentionally fouled when opponents are playing catchup or trying to slow the Pistons’ momentum.

Those weaknesses won’t affect Drummond’s contract situation. The main reason why an extension may not get done this year is to provide flexibility for the front office next summer. If Drummond holds off on the extension, the Pistons will have more cash to spend to make whatever improvements are necessary. The Pistons are projected to have anywhere from $5.7MM-$38.0MM in cap space next summer, depending on how coach and president of basketball operations Stan Van Gundy manages his roster decisions.

There is inherent risk involved for both sides to delay the process. Drummond’s incentive to sign by November 2nd (the usual October 31st deadline is pushed back a couple of days because it falls on a weekend) is to get the guaranteed money before a potential significant injury could affect his long-term value. The Pistons’ incentive to get the deal done is to keep their franchise player as happy as possible and that’s the approach they’re taking, as Van Gundy confirmed in July that extension talks would begin this summer.

Leading up to those negotiations, Van Gundy continued to construct his team around Drummond’s talents, much like Orlando’s roster was built around Dwight Howard when Van Gundy coached the Magic to an NBA Finals appearance in 2009. He re-signed point guard Reggie Jackson to a whopping five-year, $80MM deal to be Drummond’s pick-and-roll partner for years to come. He traded for a stretch four, Ersan Ilyasova, to pair up with Drummond in the frontcourt after concluding that the duo of Drummond and Greg Monroe, a low-post power forward, clogged up the middle. Monroe wound up signing with the division rival Bucks as an unrestricted free agent. Van Gundy also upgraded at small forward by acquiring Marcus Morris and drafting Stanley Johnson.

So while the Pistons could put themselves in a better position to make trades and sign free agents by waiting to lock up Drummond next summer, the more likely scenario is for Drummond to sign on the dotted line and get the most important order of business for both parties out of the way before the season starts.