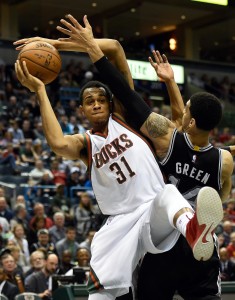 The Bucks trudged through the muck of a 15-win season in 2013/14, and they watched the career of Larry Sanders, the breakout star of the 2013 playoff team, come apart at the seams. So, they deserve tons of credit for their fast ascent over the past 12 months, snagging the sixth seed in the Eastern Conference this past season and landing Greg Monroe, No. 7 on the June Hoops Rumors Free Agent Power Rankings. John Henson, Milwaukee’s lottery pick from 2012, has been there for all of it, and it seems like both sides want to continue their partnership for years to come, as they’re reportedly on track for a rookie scale extension before the October 31st deadline.

Still, Henson hasn’t exactly seemed the most likely candidate to become a franchise cornerstone. He’s never started more than 23 games in a season, and last year, he averaged just 18.3 minutes per game. Monroe’s presence makes it difficult to envision his role expanding, unless Milwaukee wants to play two traditional big men, the sort of arrangement that appeared to hasten Monroe’s departure from the Pistons. Besides, Jabari Parker looks like the team’s future at power forward, particularly with Giannis Antetokounmpo and Khris Middleton commanding spots on the wing. Henson may well start early in the season if Parker isn’t healthy, but the No. 2 overall pick will almost certainly reclaim his job before long.

Henson seems destined to become, at best, a sixth man if the Bucks keep their existing core together. Still, Milwaukee apparently sees him as a key part of that group, even though he seemed to be available, if only for a truly attractive return, at the trade deadline. Grantland’s Zach Lowe speculated last month that Henson would end up with salaries of $10MM or more, money that’s not altogether unwarranted for a 24-year-old center with a lottery pedigree who’s indeed been productive in his limited time on the floor. The perplexing part is that it’s the Bucks who appear ready to pay him.

The former 14th overall pick’s field goal percentage has risen each of the past two years from a subpar 48.6% as a rookie. He shot 56.6% this past season, a year in which he attempted a far greater percentage of his shots from 3 feet and in, according to Basketball-Reference data. Henson’s PER has held steady, and his 18.0 figure from 2014/15 matches his career mark. He’s a strong defender who did just fine inheriting the role of rim protector from Sanders, as he averaged an impressive 2.0 blocks per game in spite of his short minutes last season. Indeed, Basketball-Reference’s Defensive Box Plus Minus shows he made quite a leap this past season, though ESPN’s Defensive Real Plus Minus wasn’t quite as kind, ranking him as only the 31st-best center in that category. Still, the Bucks were a better defensive team with Henson on the floor by a measure of 2.5 points per 100 possessions, as NBA.com shows. Yet perhaps most noteworthy among the NBA.com data is that the Bucks were stronger overall when Henson wasn’t playing because of the disparity on offense. Milwaukee scored 102.4 points per 100 possessions when Henson sat and just 96.2 when he hit the court.

That’s a noisy stat, since it doesn’t account for the other personnel on the floor. Still, it highlights the notion that it would be a risky proposition to commit eight-figure salaries to a player who’s averaged only 8.1 points per game for his career.

The Bucks nonetheless have money to burn. They have only about $36MM committed for 2016/17, though that doesn’t include nearly $13.3MM in rookie scale team options for Parker and others that Milwaukee seems likely to exercise. Still, $49.3MM against a projected $89MM salary cap leaves plenty of flexibility, and the Bucks have to spend at least 90% of the salary cap anyway. Committing part of that money to an efficient, shot-blocking center who’s on the upswing probably wouldn’t constitute the worst move a team has ever made.

Most years, the smart play for the Bucks would entail waiting another year to see how they would find time and space for Henson amid the presence of Monroe, and whether Henson would take another step forward in his development. Next summer’s rising cap and relatively thin crop of 2016 free agents, after a few stars on the top, seems to be driving Milwaukee to the bargaining table now. The extension window provides for exclusive negotiating, so another team with even more cap space to play with, one that could offer Henson a starting job, can’t jump in with an eye-popping number and force the Bucks to match a player-friendly offer sheet, as might be the case in restricted free agency next summer.

The Jim Tanner client may jump at such an opportunity to cash in a year from now, but if the Bucks indeed come with an extension offer of $10MM or more per year, it would be exceedingly difficult for a player who didn’t see 20 minutes per game last season to pass that up. It’s somewhat reminiscent of the Alec Burks extension from last fall, though Burks had played 28.1 minutes per game the season before the Jazz bestowed a deal worth $42MM plus incentives over four years. Burks missed most of this past season with a shoulder injury, and it’s not a given that the Jazz would be so munificent if he were a restricted free agent this summer. An injury, and a team that performs well in his absence, just as the Jazz did without Burks down the stretch this year, might lead the Bucks to conclude that Henson is expendable.

So, I think the sides will indeed come to an extension, and while Lowe’s $10MM-plus prediction seems surprising on the surface, the circumstances suggest that it’s a reasonable expectation. At worst, a fairly priced Henson could become a valuable trade chip for the Bucks down the road.

Do you think the Bucks and Henson will do an extension, and if so, how much do you think he’ll get? Leave a comment to tell us.