Players in the twilight of their careers often need to exercise patience when they hit the free agent market. That’s especially true for a veteran hoping to hook on to a contending team and get one last chance to earn a championship ring. Such is the case with small forward Tayshaun Prince, who won an NBA title with the Pistons in 2004 and was a fixture on a unit that reached the Eastern Conference Finals six consecutive years from 2003-08. 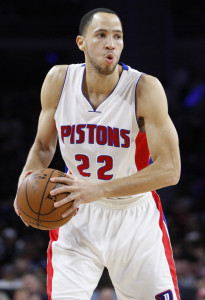 Prince got traded twice last season in his walk year. The Grizzlies, who traded for him midway through the 2012/13 season from Detroit, dealt him to the Celtics in January as part of a three-team deal in which Memphis acquired Jeff Green. Prince only appeared in nine games with the Celtics before he was shipped back to the Pistons at the trade deadline for forwards Jonas Jerebko and Luigi Datome. Prince initially thought the Pistons would release him but Detroit needed another small forward after dealing starter Kyle Singler to the Thunder as part of the Reggie Jackson trade.

He appeared in 23 games in his second stint with Detroit, including seven starts, and showed that he still had some life in his 35-year-old legs by averaging 7.3 points, 4.3 rebounds and 1.7 assists in 24.8 minutes. That included a 23-point, 7-rebound outing at Orlando on March 27th.

He may have lost a step but he still has those long arms to distract opponents defensively and knows the ins and outs of team defense. He’s a facilitator on offense, though more of a No. 4 or 5 scoring option at this stage of his career. He can also play some power forward in smaller lineups.

Seeking younger options at his spot, the Pistons had no interest in bringing back Prince. They wound up drafting Stanley Johnson and trading for Marcus Morris this summer. Meanwhile, from all appearances, Prince has not received much attention on the open market.

Sam Amico reported in his weekly column for Hoops Rumors late last month that the Trail Blazers had shown interest in the BDA Sports Management client. The Spurs reportedly contacted Prince at the beginning of free agency and the Cavs also looked into pursuing him. But the Spurs have seemingly filled their needs during a highly-successful summer highlighted by the signing of prized free agent LaMarcus Aldridge. Any hope for Prince to land in Cleveland was lost when it signed another 35-year-old small forward, Richard Jefferson.

The Blazers don’t fit the profile of a contender without Aldridge, so that would be a fallback option at best for Prince. Portland brought in two younger options at that position this summer, adding Al-Farouq Aminu in free agency and trading for Maurice Harkless.

Thus, Prince might have to take a wait-and-see approach, hoping an opportunity arises with a club that feels it needs frontcourt depth and another savvy, sage voice in its locker room. The wait could stretch into the regular season, when an injury might cause a playoff-caliber team to scour the landscape for available options.

Prince, who made $7,707,865 last season, said back in March that he felt he could play effectively for another two or three seasons. It’s likely Prince will have to settle for a one-year offer, unless the second year includes a team option.

What other teams might have interest? Pure speculation but it would seem the Wizards could be a good fit, considering they lost Paul Pierce and play a half-court style suited to Prince’s game. The Mavericks, who lost Jefferson, may also come calling, since Prince was drafted by the Pistons when Dallas coach Rick Carlisle was entering his second season as Detroit’s head man.

The Hawks, who lost DeMarre Carroll in free agency, could be a logical landing spot for Prince. The Rockets could also use some frontcourt depth, though they drafted Sam Dekker.

Prince has enough left in the tank that someone will eventually come calling. He’ll just have to stay patient until that time comes.