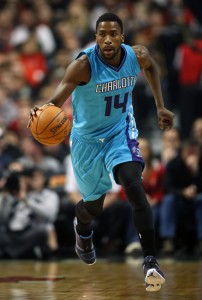 TUESDAY, 12:40pm: The deal is official, the Hornets announced.

“Michael is a huge part of what we are trying to build here in Charlotte,” GM Rich Cho said in the team’s statement. “He has dedicated himself to improving and expanding his game. Michael continues to develop on both ends of the court and has become a key piece of our team. We are thrilled that he is a Charlotte Hornet.”

MONDAY, 8:09pm: The Hornets are close to signing forward Michael Kidd-Gilchrist to a four-year, $52MM contract extension, league sources told Adrian Wojnarowski of Yahoo Sports. The agreement will be finalized this week with a news conference to follow, sources told Wojnarowski. Rick Bonnell of the Charlotte Observer confirms the deal and adds that the Leon Rose client will take a physical on Tuesday (Twitter link).

Kidd-Gilchrist averaged 10.9 points and 7.6 rebounds for Charlotte last season, his third in the league. He only appeared in 55 games before an ankle injury cut his season short.

The 21-year-old small forward has a reputation for being a stout one-on-one defender, and his player efficiency rating of 15.14 last season reflects that despite his relatively modest offensive contributions and the fact he’s averaged less than one block and one steal in each of his seasons. Hornets coach Steve Clifford proclaimed in March that Kidd-Gilchrist has the talent to become the best perimeter defender in this generation of NBA players.

He’s shot 46.4% from the field in his short career, though he’s not a threat from the 3-point line. He’s made only three shots from long range and didn’t even attempt one last season.