The Jazz began to look like a real contender over the second half of last season and one strategy entering the 2015 offseason would have been to make a major acquisition to take the team to the next level. However, Utah wasn’t going to take any shortcuts. Senior Vice President of Basketball Operations Kevin O’Connor and GM Dennis Lindsey have built the team’s foundation over the past several years and this summer was about supplementing the young core that the executive tamdem had already assembled. 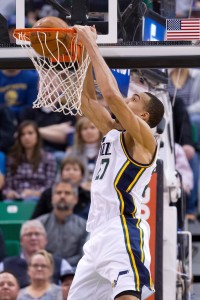 The seeds of this team’s success were planted nearly five years ago when Utah traded Deron Williams to the Nets. In retrospect, the trade was an outstanding sell-high moment for the franchise and it provided an important building block for the future. Derrick Favors was the prize of the trade and he has developed into a force on both ends of the floor. The other pieces in the trade didn’t produce any significant building blocks, although one piece indirectly shaped the franchise going forward.

Enes Kanter, whom the Jazz took with the Nets’ first round pick in 2011, showed some promise with Utah, but after three and a half seasons, the Jazz gave up on the Kanter-Favors pairing and shipped Kanter to Oklahoma City. In return, the Jazz netted a few picks and the rights to Tibor Pleiss, whom the team signed to a three year, $9MM deal this offseason. Pleiss wasn’t expected to soak up major minutes, but he gives the team frontcourt depth in case of injuries.

The real value of the Kanter trade came in the form of minutes for Rudy Gobert, whose sudden emergence, as Tony Jones of the Salt Lake Tribune told Hoops Rumors, no one saw coming. Once coach Quin Snyder inserted Gobert into the starting lineup, the team’s defense really started to hum. The success carried over this season, as Utah ranks third in the league in points allowed per game. Gobert is sixth in the league in rebounds thus far in the season with 10.8 per contest and second in the league in blocks with 2.77 per game.

The Jazz added another athletic big man when they used the No. 12 overall pick on Trey Lyles. The 6’10” Lyles, a power forward, often played out of position as a small forward at Kentucky, but the experience allowed him to develop a perimeter game, as Arthur Hill of Hoops Rumors detailed in his Prospect Profile.  The 20-year-old has the length and frame to play both power forward and center and Snyder has given him run at the four and the five this season. He hasn’t seen many offensive opportunities thus far, scoring only 2.1 points in 8.5 minutes per game. The team isn’t really counting on him for production this season, as he’s viewed as more of a long-term project.

Utah was counting on Dante Exum to take the next step in his game, but the Australian tore the ACL in his left knee late in the summer and isn’t expected to play during the 2015/16 campaign. The Jazz didn’t respond to the Exum news with a major transaction, even though they had the cap room — nearly $7.27MM — to make a substantial offer to a free agent. Instead, they increased the roles of the players who were already in house. The Jazz inserted Raul Neto, who signed a three-year, $2.9MM deal with the team earlier in the offseason, into the starting lineup and he has impressed in 18.0 minutes per game this season. Neto is snatching 1.2 steals per game and the only point guard who ranks ahead of him in ESPN’s Real Defensive Plus/Minus is Kyle Lowry. Trey Burke is getting 21.5 minutes per game, but he’s improved since last season, shooting 44.9% from behind the arc while sporting a player efficiency rating of 15.8.

The play of Burke and Neto will be crucial this season, but the development of Alec Burks, who missed most of last season with a shoulder injury, will be key to the team’s success as well. Snyder has used Burks off the bench and at times as a de facto point guard this season and the Colorado product has meshed well with fellow wings Gordon Hayward, Joe Ingles and Rodney Hood. Burks is only dishing out 2.0 assists per game, but he’s scoring 15.1 points per game and shooting 39.5% from 3-point range, with a player efficiency rating of 16.2. If Burks can continue to progress on the defensive end and demonstrate that he can be proficient at both backcourt positions, his four-year, $42MM extension from the fall of 2014 will start to look like a bargain and the team will have serious sleeper potential.

The Jazz want to develop their core. They’re counting on Hayward, Hood, Burks, Favors and Gobert to take the next step together and form a contender in a loaded Western Conference. Development takes time. The franchise could have tried to accelerate the process this past summer by signing a few veterans or trading for an established talent. However, that’s not the front office’s current objective and a quiet offseason sounds like it was a solid plan for an up-and-coming team.

One thought on “Offseason In Review: Utah Jazz”