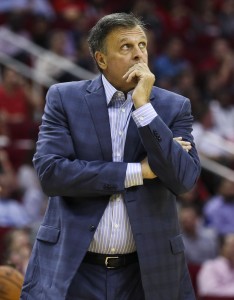 11:13am: Morey has confirmed the move to reporters, as the team’s Twitter account notes. “The team was not responding to Kevin McHale,” Morey said, according to Feigen (Twitter link). “There is no time in the West.”

10:27am: Owner Leslie Alexander and the front office, including GM Daryl Morey and fellow executive Gersson Rosas, jointly made the decision, Wojnarowski writes in a full story. The organization has faith in Bickerstaff’s ability to become a successful head coach, but he’s not assured of the job for the long term, Wojnarowski adds.

10:04am: McHale confirmed his ouster, saying that he thought he would be able to turn the team around if given more time, but he doesn’t blame the Rockets for their decision to fire him, Feigen tweets. McHale had more meetings with players over the last four to six weeks than at any other point, he added, as Feigen also relays (Twitter link). It doesn’t sound as if McHale wants to retire even as he’s unsure what he’ll do next, according to Feigen (on Twitter).

9:00am: The Rockets have decided to fire coach Kevin McHale, reports Adrian Wojnarowski of Yahoo Sports (Twitter link). Wojnarowski indicates the move has already taken place, though the team has yet to make an announcement. Assistant J.B. Bickerstaff will take over as interim head coach, with fellow assistant Chris Finch moving into the lead assistant’s role, Wojnarowski adds (on Twitter). Houston, expected to contend for the title this year, is just 4-7, and the team held a players-only meeting Tuesday. McHale earlier this week called out his team’s effort and defense and wouldn’t rule out benching marquee trade acquisition Ty Lawson from the starting lineup.

The Rockets signed McHale to a three-year, nearly $13MM extension on Christmas Eve last year, and he led the team to the Western Conference Finals in the spring. Still, the front office is cognizant of the level of talent on the roster this season and felt a need to remedy the team’s disappointing performance thus far, so the Rockets didn’t hesitate to make a move, Wojnarowski explains (Twitter link).

McHale, 57, entered the season as the NBA’s fifth-longest tenured head coach, having taken over the Rockets in June 2011. His old-school philosophy seemed an odd match for Houston’s analytically forward approach, but McHale nonetheless led the team to success. Houston had a winning record in each of McHale’s full seasons, with last year’s 56-26 mark the best of his tenure. His .598 regular season winning percentage is the best of all-time among Rockets coaches, notes Jonathan Feigen of the Houston Chronicle (on Twitter). He was 193-130 in the regular season and 13-16 in the playoffs overall with the Rockets. McHale went 39-55 over two separate stints as coach of the Timberwolves in the 2000s, and he didn’t coach Minnesota in a postseason game.

The vacancy in Houston, once the team makes the move official, will become one the league’s most attractive, though for now, Bickerstaff is poised to inherit the position. He was an assistant with the Hornets and Timberwolves before joining the Rockets along with McHale in 2011, and he’s the son of longtime NBA head coach Bernie Bickerstaff.

The job is not without its challenges. Dwight Howard isn’t playing in back-to-backs as the team tries to protect his health, and Donatas Motiejunas has yet to make an appearance as he recovers from back surgery. Sam Dekker, the team’s first-round pick this year, will have back surgery Friday and is expected to miss three months.