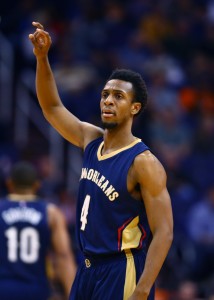 4:04pm: The trade is official, the Pelicans announced on their website and the Sixers announced via press release. Philadelphia released Tony Wroten to accommodate the move, as we detail here.

3:16pm: The Sixers are on the verge of acquiring Ish Smith from the Pelicans, reports Marc Stein of ESPN.com (Twitter link). Philly will send two future second-round picks to New Orleans in exchange for Smith, a source said to Marc J. Spears of Yahoo Sports (on Twitter). Smith spent the second half of last season with Philadelphia and thrived there, but the Sixers didn’t re-sign him in free agency this past summer. Philadelphia has a full 15-man roster, so it would have to make a corresponding move if Smith came in and nobody went out in the trade.

Smith proved valuable early this season for the Pelicans, who claimed him off waivers from the Wizards shortly before opening night. The 27-year-old averaged 8.3 assists against 2.1 turnovers through the first 16 games of the season. However, his playing time has dwindled since the return of backup point guard Norris Cole from injury, as Smith has played less than 10 minutes in four of the Pelicans’ last five games.

The timing of the move for Philadelphia is somewhat odd, since point guards Kendall Marshall and Tony Wroten recently made their season debuts after recovering from injuries. The Sixers also have Isaiah Canaan and rookie T.J. McConnell at the position.

It’s the first move of consequence for the Sixers since Jerry Colangelo became chairman of basketball operations, and it represents a departure of sorts from GM Sam Hinkie‘s philosophy, since Hinkie was notorious for stockpiling second-rounders. Smith is just the second player on the team who’s older than 25, but though he has five years of NBA experience, he doesn’t quite fit the profile of the sort of long-tenured veteran the Sixers have been rumored to be seeking. Smith doesn’t figure to markedly change the direction of the Sixers, who at 1-30 are the first team ever to win just a single game in their first 31 outings.

Smith isn’t a lavish expenditure for Philadelphia, either. His contract is non-guaranteed for the minimum salary and covers only one season. He agreed to those terms with the Wizards before the start of training camp, joining Washington even though he faced long odds to make the opening night roster. The Wizards cut him, as expected, in late October, allowing the Pelicans to scoop him up. Smith was briefly with New Orleans last season, when the Pelicans acquired him in a deadline-day trade from the Thunder, but the Pelicans waived him immediately after that deal, and Philadelphia claimed him shortly thereafter. Smith averaged 12.0 points, 6.1 assists and 2.8 turnovers in 27.1 minutes per game across 25 appearances for the Sixers last year.

New Orleans appears poised to open a roster spot if the deal goes through as reported so far. Cole, Jrue Holiday, Toney Douglas and Tyreke Evans are all around to man the point guard position. The move would appear to be a positive development for Douglas, whose contract isn’t fully guaranteed.

Which team do you think is getting the better end of this deal? Leave a comment to share your thoughts.