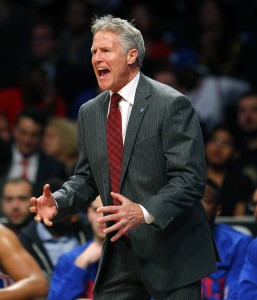 4:12pm: The Sixers sent out a press release officially announcing the extension. “Brett has been everything we anticipated – and more – both as a basketball coach and a partner in building this program,” GM Sam Hinkie said. “His tireless work ethic, his daily desire to consistently improve, and his resiliency line up with our core values as an organization. It was not difficult to come to the decision to formally say we want to work with Brett Brown even longer.”

3:02pm: The Sixers and coach Brett Brown have reached an agreement on a two-year extension, reports Adrian Wojnarowski of Yahoo Sports (on Twitter). Brown’s existing pact was to expire after next season, but the extension will allow the contract to carry through the 2018/19 season, according to Wojnarowski. The Yahoo scribe reported earlier this week, in the immediate wake of the team’s hiring of Jerry Colangelo to the front office, that an extension was “very likely” for Brown, and both the coach and owner Josh Harris confirmed shortly thereafter that they were deep into negotiations about the matter. The Sixers began their push for a deal well before Colangelo joined the team, league sources told Wojnarowski. The Sixers have called a 4:00pm Central time press conference, and they’re expected to formally announce the deal then, Wojnarowski writes.

Brown, a first-time NBA head coach, has gone just 38-149 since taking the job before the 2013/14 season, but he’s had barren rosters to work with, the result of GM Sam Hinkie‘s drastic rebuilding plan. He’s admitted that the losing gets to him sometimes and has occasionally offered subtle criticism of the front office, such as when he said recently that he wished he had more veterans on the team. He’s otherwise shown a relentlessly positive demeanor and even tempered his remark about veterans by saying that he accepts the responsibility that normally falls to experienced players.

Speculation arose that Brown was more frustrated behind the scenes than he expressed publicly. Marcus Hayes of the Philadelphia Daily News wrote this week that Brown was furious amid recent off-court trouble for Jahlil Okafor, with Hayes suggesting the team’s handling of the matter might have driven the coach to his breaking point. Brown said in September that he intended to serve out the remainder of his contract and had no plans to quit.

The coach was worried about his job security early last season, but Hinkie dispelled those fears and the coach’s willingness to forge ahead despite trying circumstances won him respect in the Sixers organization, as TNT’s David Aldridge recently reported. Harris and Hinkie professed their admiration for Brown as training camp began this season.

Brown is the third coach to come to terms on an extension since the start of the season, joining Rick Carlisle of the Mavericks and Steve Clifford of the Hornets. Carlisle is the only one among the three who has a winning record for his team.

Does Brown deserve the extension? Leave a comment to tell us.