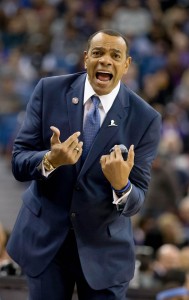 The Nets have fired coach Lionel Hollins and reassigned GM Billy King to another job in the organization, the team announced today. Assistant Tony Brown has been named interim head coach, while the GM position will remain open for now.

“After careful consideration, I’ve concluded that it’s time for a fresh start and a new vision for the direction of the team,” Nets owner Mikhail Prokhorov said. “By making this decision now, it enables our organization to use the rest of the season to diligently evaluate candidates with proven track records. It’s clear from our current state of affairs that we need new leadership. With the right basketball management and coach in place, we are going to create a winning culture and identity and give Brooklyn a team that it can be proud of and enjoy watching. We have learned a great deal during the past six years and our experiences will guide us for the future. Following the consolidation of team ownership last month, I can assure you that I’m more determined and committed than ever to build a winner.”

Hollins spent a year and a half as Brooklyn’s coach, compiling a 48-71 record. The Nets currently have the third-worst record in the league at 10-27. King was in his sixth season as GM after being named to the position in July of 2010. There are no immediate plans to fill the GM role, posts Mike Mazzeo of ESPN. While King has been officially “reassigned,” he won’t be making basketball decisions going forward, writes Andy Vasquez of NorthJersey.com. With about six week left before the trade deadline, it’s unclear who will be responsible for those decisions, Vasquez tweets.

“I want to thank Billy for his hard work in the development of the Nets,” Prokhorov said. “At every step of the way, he has been aggressive in his quest to build a winning team and has been a key factor toward the Nets making the playoffs for each of the last three seasons.  Beyond this, he has been a tremendous friend, wonderful colleague, and loyal partner and we wish him success in the future.  I also want to thank Lionel for his efforts and dedication on behalf of the Nets franchise. To our fans, I thank you for your continued enthusiasm and support and please know that brighter days are ahead.  I’m excited to begin the process of choosing the best GM and head coach available.”

The moves expose chaos within the Nets, tweets Adrian Wojnarowski of Yahoo Sports. He says nearly everyone in the organization learned of the actions through a news release. A team insider called the moves “face-saving,” according to a story by NetsDaily.com.

King joined the team as GM in the summer of 2010, and the team has won just a single playoff series since. His contract is set to expire at season’s end. A report, later denied, surfaced earlier this week from Europe indicating that Prokhorov wants CSKA Moscow team president Andrey Vatutin as the club’s next GM. CEO Brett Yormark is reportedly enamored with John Calipari.

The Nets hired Hollins in the summer of 2014 shortly after the departure of Jason Kidd for the Bucks. He went 48-71 with Brooklyn during the regular season over a season and a half, and the Nets fell in six games to the Hawks in the first round of the playoffs last year.