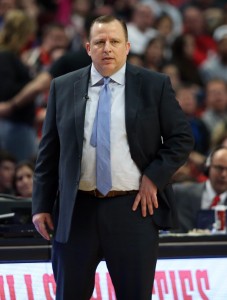 The Nets are strongly interested in Tom Thibodeau to be their next coach, according to Mike Mazzeo and Marc Stein of ESPN. Brooklyn is expected to pursue the former Bulls coach after it names a new GM.

Thibodeau compiled a 255-139 record in five seasons with Chicago before being fired after losing to the Cavaliers in last year’s Eastern semifinals. He led the Bulls to playoff appearances in all five seasons.

The Nets fired coach Lionel Hollins and reassigned GM Billy King in a shakeup last Sunday. It’s uncertain how soon a new GM might be hired, but reports on Wednesday linked former Suns and Raptors GM Bryan Colangelo to the position. Former Hawks GM Danny Ferry has also been rumored to be a candidate.

Other coaches reportedly being considered include Luke Walton, John Calipari, Monty Williams and Chris Mullin. However, Calipari “is not under serious consideration,” tweets Howard Beck of Bleacher Report.

4 thoughts on “Nets Strongly Interested In Thibodeau As Coach”