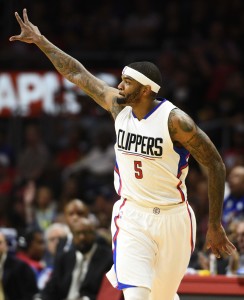 12:18pm: The deal is official, the Rockets and Clippers announced. It’s Smith, the rights to Lishouk and cash to Houston in exchange for the rights to Leunen.

10:24am: The teams still haven’t made any formal announcements, but Rockets GM Daryl Morey gave confirmation of the deal via Twitter.

9:31am: Josh Smith is headed back to the Rockets via trade from the Clippers, reports Adrian Wojnarowski of Yahoo Sports (Twitter link). Wojnarowski indicates the deal has already taken place, though the teams have yet to make an announcement. The Clippers are sending Smith along with enough cash to cover Houston’s salary obligation to the veteran big man, who’s on a one-year deal for the minimum, and the Rockets are sending draft-and-stash prospects to the Clippers, Wojnarowski adds (Twitter links). One of those is Maarty Leunen, the 54th overall pick from 2008 who plays for Sidigas Avellino of Italy. Draft-and-stash prospect Sergei Lishouk, the 49th overall pick from 2004 who’s with Murcia of Spain, is going from the Clippers to Houston, the Yahoo scribe also reports (Twitter links).

The Clippers had thought about waiving Smith, Wojnarowski writes in a full story, and he’s wanted off the team for a while, having feuded with coach/executive Doc Rivers about his role, according to Calvin Watkins of ESPN.com (Twitter link). His personality was also a poor fit with his Clippers teammate, Watkins adds, though he was well-respected in the Houston locker room after playing for the Rockets last season (Twitter links). James Harden and Dwight Howard are particular fans, according to Watkins, and several Rockets players wanted him to return, league sources told Wojnarowski. Smith thought he would have to take a reduced role this season if he re-signed with the Rockets this past summer, leading him to sign with the Clippers instead, Watkins tweets, but he has regretted that decision, Wojnarowski writes.

The deal would be legal with Smith as the only NBA player changing hands, because Houston can absorb him via the minimum-salary exception, though it would bring the team within $1MM of its $88.74MM hard cap. The Rockets have been carrying an open roster spot, so no corresponding move would be necessary. Conversely, the deal would open a roster spot for the Clippers, who’ve been at the limit of 15 players. Both the Rockets and Clippers are taxpaying teams, though Smith represented a greater tax obligation to L.A. than he will for Houston, since the Clippers are further above the tax threshold and thus subject to additional penalties. Sending out Smith without taking an NBA player in return would allow the Clippers to create a $947,276 trade exception, equivalent to the portion of Smith’s salary paid by the team. Smith’s actual salary is $1,499,187, and the league is paying the difference. Leunen and Lishouk aren’t expected to play in the NBA, according to Wojnarowski, so the essential components of the deal for the Clippers are the tax savings, the open roster spot, and the ability to move on from Smith.

The Clippers have considered either trading or releasing Smith for most of the season, according to Dan Woike of The Orange County Register (Twitter link). Rivers in December denied a report from Marc J. Spears of Yahoo Sports that the Clippers gauged trade interest around the league in Smith and Lance Stephenson during November. Michael Scotto of SheridanHoops reported last week that the Clippers were making Smith available. Bleacher Report’s Ric Bucher said earlier this week that the Clippers felt as though they’d be better off in the long run if they could trade Smith and Stephenson, which lines up with his report from December.