For much of the 2014/15 campaign, many pegged Jahlil Okafor as the top prospect for the 2015 draft. His footwork, ball-handling skills and overall fundamentals enraptured scouts and fans alike. Yet after two months of NBA action and several off–court incidents, questions remain about whether the big man can become a franchise cornerstone. 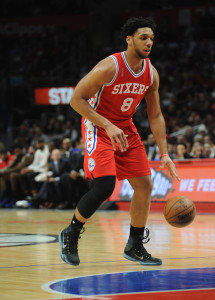 Part of the issue is the fit in Philadelphia. Okafor has no future in the league playing any position besides the five spot, something that’s even more true with the small-ball trend taking over the league. The problem, at least on the court, lies in the personnel around him. Nerlens Noel is clearly a center despite playing over half of his minutes at the four spot. Joel Embiid showcased some outside shooting during his time in college, but there is little evidence that he can play any position beside the five at the NBA level. Whenever the Sixers get out of the rebuilding industry and start looking to field a competitive team, they’ll have some decisions to make, as there is just no room at the inn for all these big men.

Making a trade will be the logical option at some point and maximizing value has been a constant during the Sam Hinkie administration. The Sixers traded Jrue Holiday just months after he appeared in his first All-Star Game, and they dealt Michael Carter-Williams when he was the reigning Rookie of the Year. Okafor’s trade value has probably taken a hit since he came into the league, but young big men with his kind of talent don’t become available very often, and if the Sixers dangle him in trade discussions, they should be able to fetch an excellent return.

Earlier in the season, John Smallwood of The Daily News wondered if the Sixers should consider a trade for Derrick Rose. Franchise-altering stars rarely become available, and although Rose hasn’t consistently played at an MVP level since injuring his knees, this is the type of move the Sixers should be making if they’re going to claim a strategy of championship-or-bust. Smallwood suggested the team offer the Lakers’ pick, which was acquired in the MCW trade, and one other late first-round pick for Rose. That Lakers pick is one of the league’s best trade assets, given Los Angeles’ struggles, and it may not make sense to give that up for the gamble that Rose has become. A deal centered around Okafor and Rose would be better for Philadelphia, and it would make sense for Chicago.

The Bulls have an anemic offense and the team chemistry has been shaky to say the least. With Jimmy Butler‘s emergence as a No. 1 option, the Bulls may be better off retooling around their star wing. Chicago has reportedly made Taj Gibson and Joakim Noah available in search of an upgrade on the wing opposite to Butler. Finding value for Noah would be tricky, as Chuck Myron of Hoops Rumors noted in Noah’s trade candidate piece, and trading Gibson would likely net a greater return, but it carries the risk of turning a position of strength into one of weakness if Noah and Pau Gasol depart after the season. In addition to adding a young pillar who could help carry the team offensively, the acquisition of Okafor would allow Chicago to explore the trade market for another perimeter player.

Philadelphia would have to include other players in order to have the financial ability to acquire Rose, as Okafor is making roughly $4.58MM this season and the Sixers currently sit nearly $10MM under the salary cap. They could toss Carl Landry with his $6.5MM salary and Isaiah Canaan, who is making slightly over $947K, into a package with Okafor and they would have a successful trade from a salary matching standpoint. Both sides would likely argue that the other should attach an asset to make a deal happen, but I’d speculate that Chicago would ultimately have to pony up a little more value, such as a protected first-round pick, to get a deal done because of the size of Rose’s deal.

His contract, which has slightly over $41.4MM remaining on it and includes a 15% trade kicker, makes acquiring him a deterrent for nearly every franchise. Yet Philadelphia is built a little differently than the typical NBA team. Acquiring Rose and his massive contract wouldn’t carry the same opportunity cost for Philadelphia as it would for the other 28 franchises to do the same. As noted above, The Sixers are nearly $10MM under the cap this season and the team has only slightly more than $25.5MM in guaranteed salary on the books against a projected $89MM salary for the 2016/17 season, as our Salary Cap Projection page indicates. Philadelphia hasn’t spent all of its cap space in any season during the Sam Hinkie era and there have been rumors that agents would steer their clients away from signing in Philly once they were ready spend. The presence of Jerry Colangelo might bring change to that, but the team can’t reasonably believe a true star is going to arrive via free agency yet.

Rose, who has missed the last few games because of his hamstring injury, hasn’t resembled anything close to a franchise player this season, averaging just 14.4 points, 5.1 assist and 0.6 steals per game, while shooting 38.6% from the field, including an icy 24.6% from behind the arc. The Memphis product has suffered numerous injuries over the last calendar year, including a torn right knee meniscus and a sprained left ankle. His preseason orbital fracture led him to spend two weeks in a dark room doing almost nothing, according to Zach Lowe of ESPN.com. Having that type of facial injury has to alter your mental psyche on the court, and the Sixers would give Rose an environment this season where he could simply work on his game, similar to an elongated D-League stint. This is a perfect buy-low opportunity for the franchise and it’s also a winning situation for Rose. The former No.1 overall pick could benefit from running a Mike D’Antoni offense, which has historically been favorable to point guards, and set himself up for another lucrative payday at the end of the 2016/17 season.

Picture a healthy — both mentally from a basketball standpoint and physically — Rose running the break during the 2016/17 season with Noel and Jerami Grant galloping alongside him. Nik Stauskas is sprinting down the sideline, spacing the floor and taking attention away from Rose, while Robert Covington is trailing the play, staying ready for the spot-up 3-pointer in transition. Picture Embiid, hopefully standing on two healthy feet, cheering on the team near the bench as he gets ready to headline a respectable second unit that includes Dario Saric, Ish Smith and Richaun Holmes. Add in a likely top-three overall pick in the 2016 draft, as well as a few other rookies, and you can see a team with an identity and a future.

This scenario may be a pipe dream, but if the point guard’s game can resemble anything close to an All-Star’s again, trading Okafor for him would put Philadelphia back on the NBA map. If Rose suffers a setback or simply remains ineffective, the Sixers are right where they are now — in a position to tank. The difference would be that they took a high-ceiling risk that involved the acquisition of a possible game-changing star to arrive at the same point, and that would be a path to the lottery that other team owners can’t gripe about.