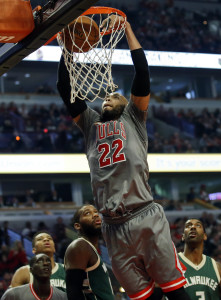 Taj Gibson provides old-school skills at a position that has become increasingly more perimeter-oriented. The Bulls veteran is the antithesis of a stretch four — he doesn’t spread the floor by hanging around the 3-point circle and waiting for a kickout pass.

Gibson’s game is based upon power. He’s a solid rebounder, a superior rim protector and an above-average mid-range shooter.

The Bulls apparently hope that another team that needs a player fitting that description will give them a call. Adrian Wojnarowski of Yahoo Sports raised that possibility last month, reporting that the Bulls are looking to acquire the best possible wing player available, with Gibson or Joakim Noah being the bargaining chip. The Bulls believe they need another shooter at the wing alongside emerging franchise player Jimmy Butler, according to Wojnarowski.

On the surface, that’s surprising since Chicago currently ranks fourth in the league in 3-point percentage. But in their quest to reach the NBA Finals, the Bulls will need all the firepower they can muster to prevent the Cavaliers from making a return trip.

Chicago is hopeful of getting Mike Dunleavy back in action during the second half of the season, which could fill that need. There’s no guarantee that Dunleavy will regain his old form once he completes his rehab of a back injury that has sidelined him all season, so the Bulls could opt for a healthier, younger wing man.

Noah’s return from a shoulder injury on Monday gives the Bulls plenty of frontcourt depth. They have one of the league’s top centers in Pau Gasol, a defensive stalwart in Noah and a stretch four in Nikola Mirotic. They also have an emerging rookie in Bobby Portis, who has skills similar to Gibson’s.

Gibson had been starting and playing heavy minutes in Noah’s absence but the Bulls could easily plug Portis into Gibson’s role if they swing a deal. Sam Smith of NBA.com recently provided a compelling argument against trading Gibson, opining that he’s simply too valuable and reliable to send packing. Moreover, Smith points out, the Bulls’ frontcourt could be thinned considerably following the season. Noah becomes an unrestricted free agent and Gasol, woefully underpaid by NBA standards, will almost certainly opt out of the final year on his contract.

By the numbers, Gibson remains as effective as he’s ever been. His PER has exceeded the league average in three of the last four seasons and it’s currently at 15.54 this season. He’s shooting a career-best 52.8% from the field, his 6.8 rebounding average is as high as it’s been since his rookie season and he’s averaging a career-high 1.5 assists.

According to NBA.com’s advanced stats, Gibson has made 45.5% of his mid-range shots. Gibson has actually had more trouble finishing at the rim (40% on layup attempts), so his offensive production could increase if he can get that straightened out.

Gibson’s strong season can be attributed in part to improved health. He had offseason surgery that uncovered and repaired a torn ligament in his left ankle and he told K.C. Johnson of the Chicago Tribune that his mobility is much improved. “I’m completely stronger as far as my lateral movement and being able to switch more to guards,” Gibson said. “I feel a lot faster.”

Noah’s $13.4MM salary, plus his injury history and impending free agency, makes him tougher to deal than Gibson, a Western Conference GM recently told Sean Deveney of The Sporting News.

Gibson is making $8.5MM this season and is locked into an $8.95MM contract in his walk year of 2016/17. Thus, it makes sense that any team dealing for him would want him in its rotation beyond this season. It also figures that his suitor would be a playoff contender, since Gibson doesn’t fit the mold of a young, developing player with upside.

Which playoff contenders need another rebounding big? Start with the Hawks, who rank last in rebounding differential. They have one of the league’s most feared 3-point shooters in veteran swingman Kyle Korver, who is shooting a career-low 36% from long distance. Perhaps a change of scenery could energize Korver.

The red-hot Clippers may not be inclined to do anything at the moment but their team rebounding numbers are surprisingly poor despite the presence of DeAndre Jordan and currently injured Blake Griffin. Another big body could help them down the road and they could offer veteran wing Jamal Crawford, a proven bench scorer.

The Grizzlies are one of the league’s worst 3-point shooting teams but could also use someone to fortify their frontcourt behind Zach Randolph and Marc Gasol. Courtney Lee is struggling with his shot this season but is a 38.1% career shooter from long distance, so that might interest the Bulls.

These trade proposals are pure speculation on my part but offer a glimpse as to what type of player the Bulls might get back for Gibson. Bear in mind that Chicago is a taxpaying team, so the Bulls can only take in 125% of the salary they trade away, plus $100K, unless they bring in players with contracts that fit within the minimum salary exception.

Don’t forget the Bulls rarely go the trade route to improve their team — they haven’t made one since July 14th, 2014, and lack trade exceptions. But if the Bulls truly want to get another shooter for their playoff run, dealing Gibson would seem to be their best option.