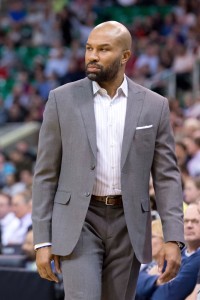 10:05am: Fisher’s dismissal and the promotion of Rambis to interim head coach are official, the team said (Twitter links). The Knicks attributed the announcement to Jackson.

9:54am: The Knicks have fired coach Derek Fisher, reports Ramona Shelburne of ESPN.com (Twitter links). The team hasn’t made any announcement, but Shelburne hears from sources that the move has taken place. New York will name Kurt Rambis interim coach, Shelburne adds, though league sources tell Brian Windhorst of ESPN.com that they believe Brian Shaw and Luke Walton, both of whom have ties to team president Phil Jackson, are the team’s top long-term candidates for the position (Twitter link). Former Knicks assistant Tom Thibodeau has always wanted to become the head coach in New York and “would crawl” to Madison Square Garden for the job, a confidant told Ian O’Connor of ESPNNewYork.com (Twitter link), though it’s unclear if the team will consider him.

Knicks owner James Dolan wasn’t thrilled to hear Fisher say that it wouldn’t be disappointing if the team missed the playoffs in comments the coach made last week on the “The Michael Kay Show” on ESPN 98.7 FM, as a source told Frank Isola of the New York Daily News for a piece that came out overnight. Fisher’s job didn’t appear to be in jeopardy because he had the support of Jackson, Isola wrote then, but Dolan, who has the ultimate authority, hasn’t been reluctant to exercise it years past, as the Daily News scribe pointed out.

Knicks “management” has been disappointed with the team’s performance, tweets Ian Begley of ESPNNewYork.com, though it’s not clear if it was Jackson, Dolan or someone else who was primarily dismayed. New York has lost nine of its last 10 games, including back-to-back home losses to the Grizzlies and Nuggets this weekend, to drop to 23-31, five games back of the Pistons for eighth place in the Eastern Conference. Fisher’s record in a season and a half with the team was 40-96, including last season’s 17-65 disaster. Many executives and assistant coaches from other teams around the league thought Fisher put on the league’s worst coaching performance last year, according to Jake Fischer of SI Now (Twitter link). Last season was Fisher’s first as an NBA coach, having scored the Knicks job immediately after the end of his playing career. The team feels as though Fisher wasn’t effectively making the transition from player to coach, sources told Windhorst.

The Knicks signed Fisher to a five-year, $25MM deal after the team reportedly encountered difficulty in its negotiations with Jackson’s top choice, Steve Kerr, who chose to take the Warriors job instead. Fisher made headlines during his time with New York for an alleged run-in with Matt Barnes, though the relationship Fisher had with soon-to-be free agent Kevin Durant, his former teammate on the Thunder, was always part of his appeal. Durant spoke highly of the Knicks when Oklahoma City was in New York for a game recently.

Did Fisher deserve to be fired? Leave a comment to tell us.