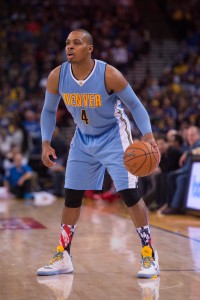 8:52pm: The Thunder have acquired Randy Foye from the Nuggets, sending D.J. Augustin, Steve Novak, two second-round picks and cash to Denver, the teams announced, confirming the original report from Ken Berger of CBSSports.com (Twitter link). The second-rounders the Nuggets get are Oklahoma City’s 2016 second-rounder and Charlotte’s bottom-five protected 2016 selection, according to RealGM. Oklahoma City confirms the receipt of a trade exception, which will be worth $3,750,001, the equivalent of Novak’s salary.

It appears to be quite a haul for Foye, who is making $3.135MM on an expiring contract. Foye was said to be available as of mid-December, as Steve Kyler of Basketball Insiders reported then, and that made sense considering his role had increasingly shrunk with Denver. Foye is averaging career lows in points and minutes per game while shooting a career worst 29.6% from 3-point range, well beneath his career mark of 37.0%. The move to add Foye brings a veteran to the Thunder’s bench, at the very least.

Novak, despite not being used much, proved to be a decent trade chip. The 10th-year veteran is on an expiring contract, and he and the Nuggets will reportedly discuss a buyout. Denver tried to arrange another deal to flip him before the deadline, according to Adrian Wojnarowski of The Vertical on Yahoo Sports reports (on Twitter).

Augustin, who’s making $3MM in the final season of his contract, will likely serve as a backup to Emmanuel Mudiay for the Nuggets, with Jameer Nelson battling a potentially season-ending wrist injury. Through 34 appearances with the Thunder this season, Augustin has averaged 4.2 points, 1.3 rebounds, and 1.9 assists in 15 minutes per game.

The deal saves Oklahoma City an estimated $9.8MM in combined luxury taxes and salary, notes Brian Windhorst of ESPN.com (on Twitter). Denver used the $5,224,719 disabled player exception it received for Wilson Chandler to accommodate the uneven exchange of salaries.